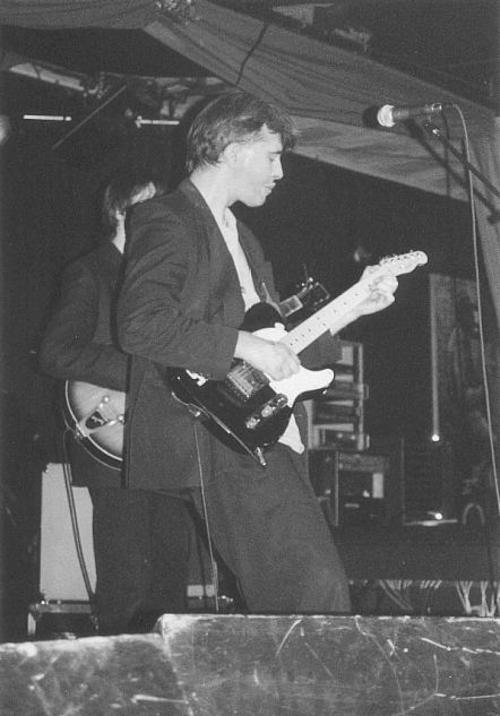 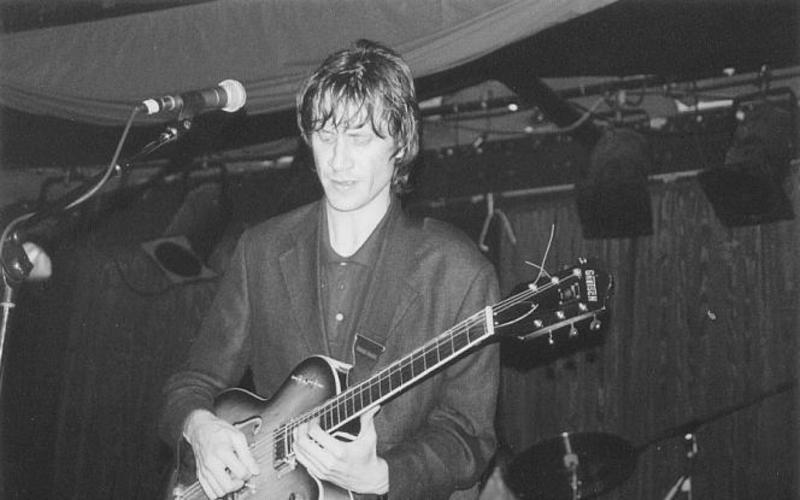 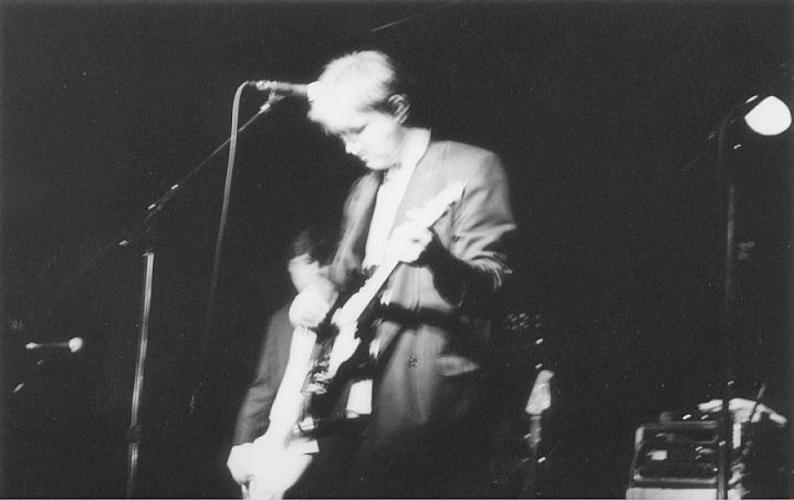 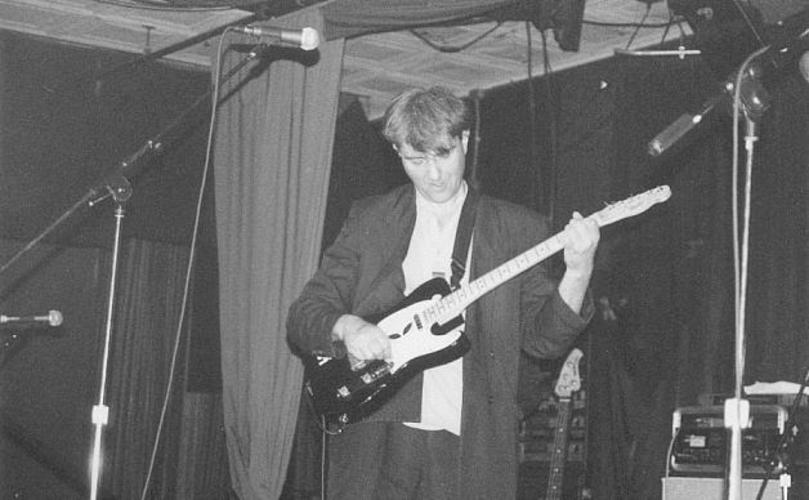 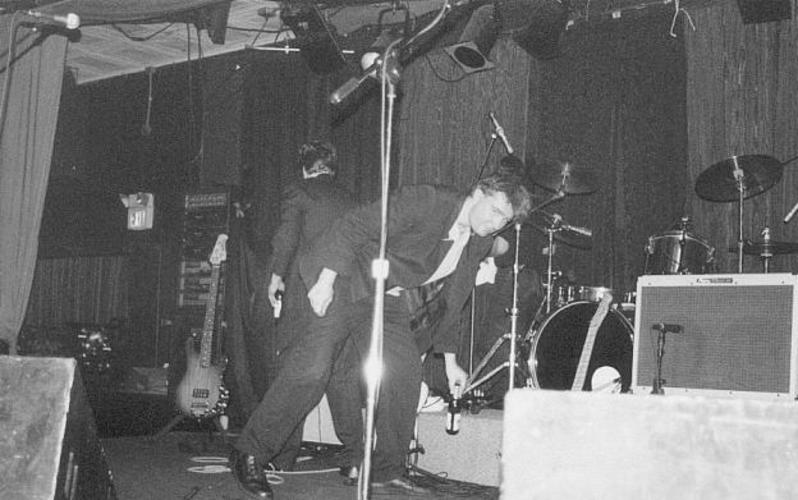 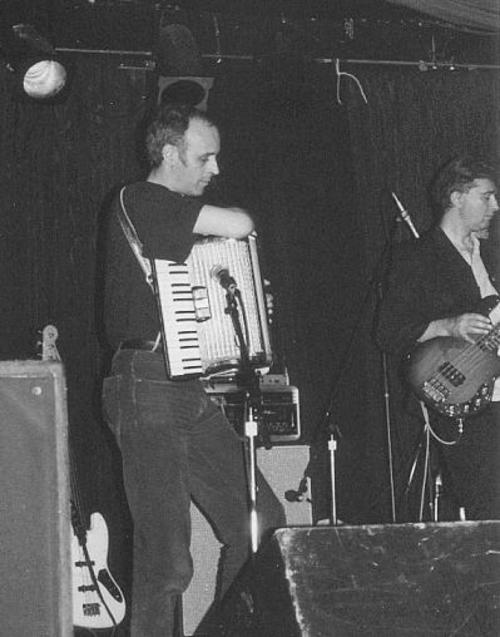 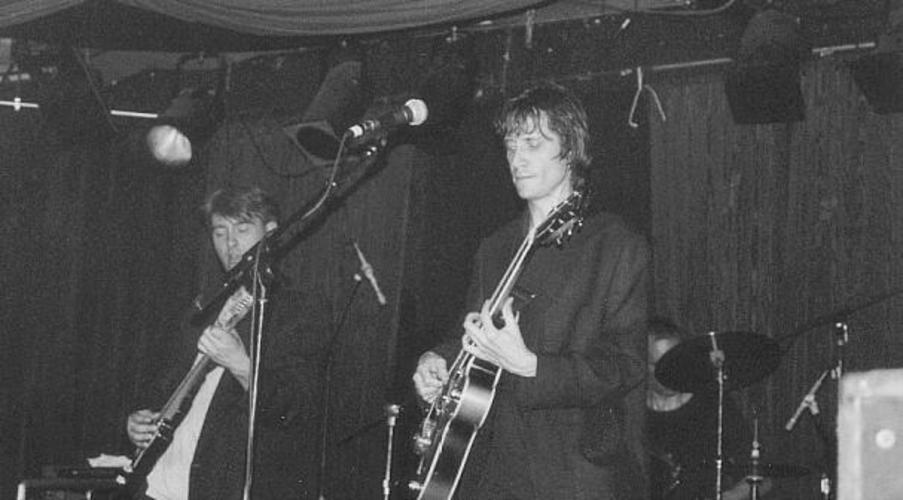 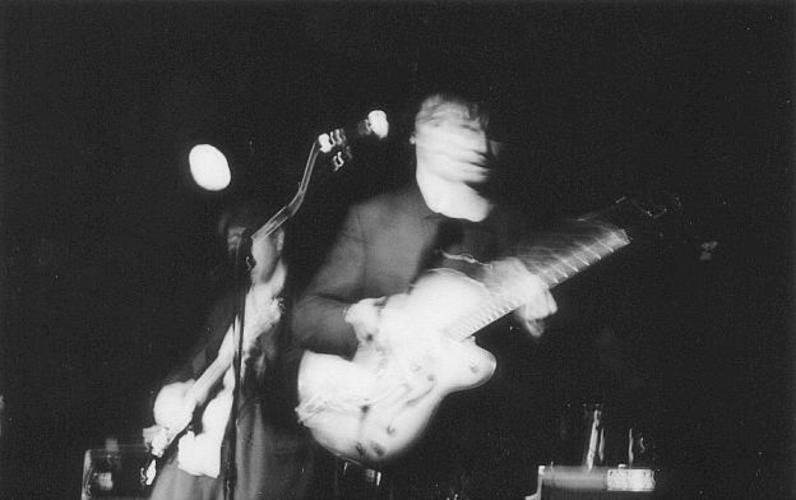 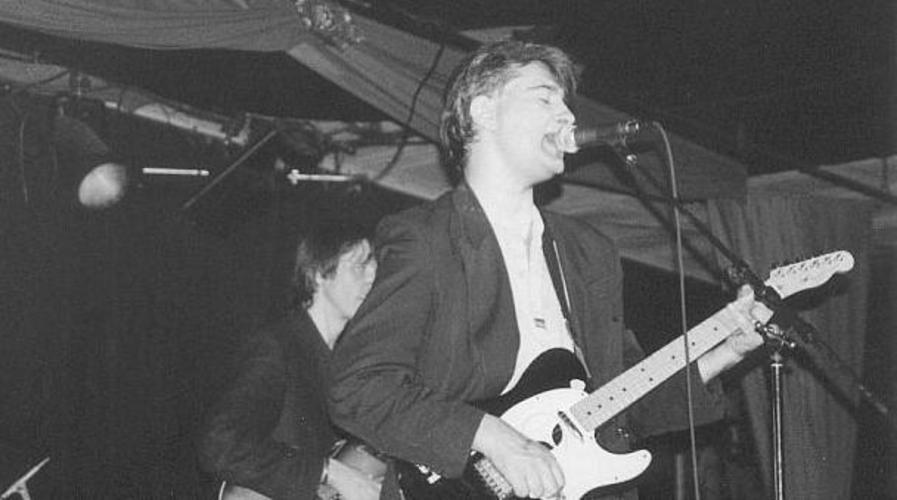 
The attendance at the 40 Watt was extraordinarily sparse. There were some UGA students there, but they were there to see Death Cab for Cutie who opened the show. The audience had shrunk by the time AEUK came on, and no one, including me, could really make out what they were on about, but they were gone in a flash. Pat and Max were in a good mood and Pat thanked the audience continually. He was making jokes about the small crowd, when Steve joined them he threatened "soon we will outnumber you!" Pat broke a string very early on, not sure what song it was. Unlike how the Cleveland show was apparently, they didn't play halfheartedly and it was a wonderful introduction for me to JBC live.

Afterwards as Owen and Steve were packing up I had them sign a flier I'd pulled off the wall. Steve told me to go around backstage to get Pat and Max to sign it. When I walked into the room, Pat pointed at me saying, "I think I know who you are!" It turns out he'd read my "Glorious and Idiotic" review in the Flagpole free weekly (www.flagpole.com) and had noticed my name when I signed up for their mailing list. (I should mention that I didn't recognize Pat who was standing right in front of me, shows what a newbie I am!) I was beyond flattered that he'd remembered it and me and liked what I had to say. He signed the flier, "thanks mate, you did your best!" Apparently not a lot of people were really excited by my praise for the album! Still, even though I felt bad for them playing to such a small group, it did make the gig a bit friendlier and relaxed. I took a bunch of pictures not all of which look great because I mainly had to use a flash which killed all of the lighting. Hope you like them! The scans there are pretty small and I can give you larger versions if you want. I hope the guys get to see them, besides the music they were one of the nicest bands I've ever met and were very appreciative of my enthusiasm.

transassholism / and you've got to say it's better than a war

In 2000 the Jazz Butcher and his band performed to an audience of about ten people at the 40 Watt Club in Athens, Georgia. I was catatonically drunk, but I remember that their set was as satisfying as the turn-out was depressing. Future hot-shit indie-frauds Death Cab for Cutie opened the show, and there were maybe fifteen people there specifically to see them. It was a complete bath for the club, Im sure, as the audience never numbered more than 25, and at least ten of those I know to have gotten in for free. So Death Cabs fifteen fans, who were all either seventeen years old or named Amber Townsend, left as soon as they finished. Death Cab also decided to leave as quickly as possible, trying to duck out before the Jazz Butcher even took the stage. When the club understandably gave Death Cab less money than they expected, members of the band apparently pitched a (no doubt very sensitive) hissy fit. Im not sure what was said, or if there was any physical contact, but whatever happened led to Death Cab being banned from the 40 Watt for almost four years. A year later Ben Gibbard briefly recounted the affair in that horrible Devil in the Woods magazine, and seemed to feel legitimately ashamed about his actions. I didnt witness the altercation, but throughout their performance, and up until the point when they left (attracting as much attention as they could from a crowd of ten), they were visibly pissed about the turn-out, and looked like theyd rather be anywhere else. This was in early 2000, right after their second album had been released, and well before they attained any notable national fame. They didnt have any reason to expect a good turn-out, and their actions made them look like presumptuous assholes.

The Jazz Butcher, meanwhile, who had much more of a right to be upset, having come all the way from England, took everything in stride. Instead of complaining or moping he addressed the situation the only way men should, with humor and alcohol. He and the Conspiracy (or whatever they were calling themselves then) put on a good, highly entertaining show, and the few of us who gave a shit about them had a damn good time. If the guys in Death Cab had stayed they would have learned something about professionalism, and/or how not to be pathetic dicks.

I got hooked on the Jazz Butcher when I was twelve, thanks to Rich Halls old Onion World program on the original Comedy Channel. Hall had lots of good bands on that program - del Amitri, the Trashcan Sinatras, Big Dipper - but the Jazz Butcher was the most prominent, and the best. Partytime and Southern Mark Smith are two of my favorite songs by the Butcher. I used to listen to them on a tape I made by hooking our television up through the stereo. These songs come from my old vinyl copy of the Bloody Nonsense compilation, which I believe is currently out of print. They sound a lot better when the Sniglet guy isnt talking over them, thats for sure. But so there are a lot of Jazz Butcher compilations out there, and for the most part you'll probably want to stick with his early '80's stuff.