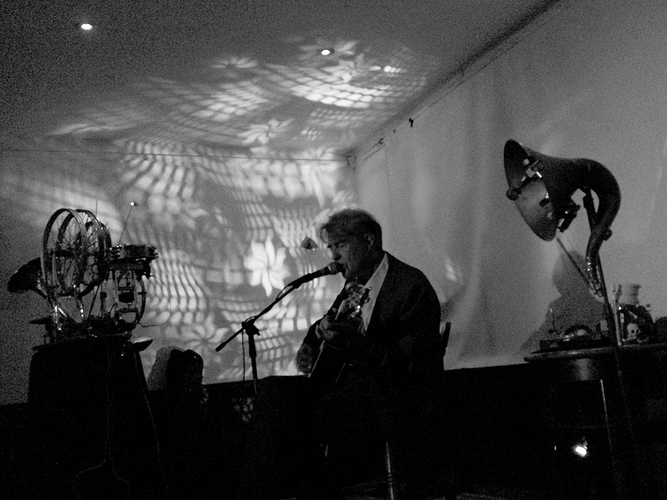 Howlin' at the moon

Having been one of the few lucky ones to find the Golden Ticket in my tub of Terrifically Tasty Truax Toffee, it was with the excitement normally only felt by 4 year olds rushing downstairs to see if Santa had stopped by that I headed off to Wowtown NN1 to witness the not-to-be-missed, one-night-only, show-of-a-lifetime being hosted this evening in the world at the back of the wardrobe, aka the legendary labour club.

Not that amplification is necessarily required here, but Mr Fish's set, which took us from A to B (Ayres to Blegvad)and back via a good dose of Gentlemanly Adventuring, sounded all the better when cables weren't being kicked out of sockets.

Then came the wonderously splendiferous and magically maniacal Mr Truax. Firing up his collection of instruments designed after tapping into the spirit mind of Lewis Carroll (that's what a man at the bar told me..... I think), the crowd looked on agog, as if mesmerised by the little spinsters rhythmic rotations. From those of us who had only heard of Mr Truax in whispers in shadows it was a truly New Musical Experience. For those seasoned fans who followed the man from the most southerly of the Hamptons, hopefully the North Hampton experience lived up to their hopes.

Beyond the tales of dog picnics and strolls in the streets of NN1, these songs are amazingly catchy. Four days on and I can't get the tunes out of my head.

This man is truly magical. It is indeed a fine line between genius and madness, and with one foot in each camp, roll up, roll up and howl with the rest of us!!

PS cd's are available from all good outlets