Cult of the Jazz Butcher 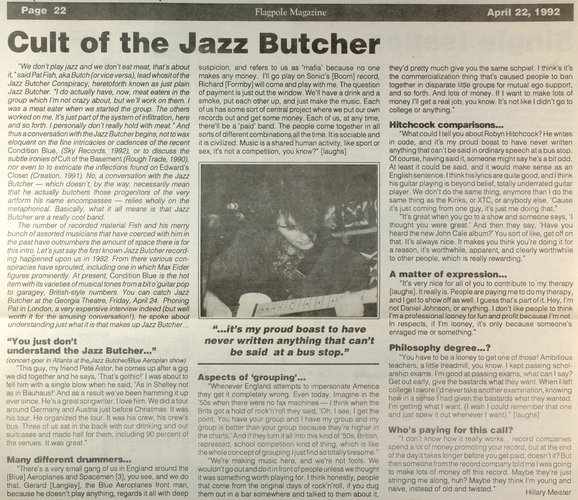 "We don't play jazz and we don't eat meat, that's about it," says Pat Fish , aka Butcher (or vice versa), lead whosit of the Jazz Butcher Conspiracy, heretoforth known as just plain Jazz Butcher. "I do actually have, now, meat eaters in the group which I'm not crazy about, but we'll work on them. I was a meat eater when we started the group. The others worked on me. It's just part of the system of infiltration, here and so forth. I personally don't really hold with meat."
And thus a conversation with the Jazz Butcher begins, not to wax eloquent on the fine intricacies or cadences of the recent Condition Blue, (Sky Records, 1992), or to discuss the subtle ironies of Cult Of The Basement (Rough Trade, 1990), nor even to extricate the inflections found on Edward's Closet (Creation Records, 1991). No, a conversation with the Jazz Butcher - which doesn't, by the way, necessarily mean that he actually butchers those progenitors of the very artform his name encompasses - relies wholly on the metaphorical. Basically, what it all means is that Jazz Butcher are a really cool band.

The number of recorded material Fish and his merry bunch of assorted musicians that have coerced with him in the past have outnumbered the amount of space there is for this intro. Let's just say that first known Jazz Butcher recording happened upon us in 1982. From there various conspiracies have sprouted, including one in which Max Eider figures prominently. At present, Condition Blue is the hot item with its varieties of musical tones from a bit o' guitar pop to garagey, British-style numbers. You can catch Jazz Butcher at the Georgia Theatre, Friday, April 24. Phoning Pat in London, a very expensive interview indeed (but well worth it for the amusing conversation!), he spoke about understanding just what it is that makes up Jazz Butcher...

"This guy, my friend Peter Astor , he comes up after a gig we did together and he says, `That's gothic!' I was about to fell him with a single blow when he says, `As in Shelley not as in Bauhaus!' And as a result we've been hamming it up ever since. He's a great songwriter. I love him. We did a tour around Germany and Austria just before Christmas. It was his tour. He organized the tour. It was his crew, his crew's bus. Three of us sat in the back with our drinking and our suitcases and made hell for them, including 90 percent of the venues. It was great."

"There's a very small gang of us in England around the The Blue Aeroplanes and Spacemen 3, you see, and we do that. Gerard [Langley], The Blue Aeroplanes's front man, because he doesn't play anything, regards it all with deep suspicion, and refers to us as `mafia' because no one makes any money. I'll go play on Sonic Boom 's record, Richard Formby will come and play with me. The question of payment if just out the window. We'll drink and have a smoke, put each other up, and just make the music. Each of us has some sort of central project where we put our own records out and get some money. Each of us, at any time, there'll be a `paid' band. The people come together in all sorts of different combinations all the time. It is sociable and it is civilized. Music is a shared human activity, like sport or sex, it's not a competition, you know?" [laughs].

"Whenever England attempts to impersonate America they get it completely wrong. Even today. Imaging in the '50s when there were no fax machines - I think when they got a hold of rock'n'roll they said - `Oh, I see, I get the point. You have your group and I have my group and group is better than your group because they're higher in the charts.' And if they turn it all into this kind of '50s, British, repressed, school competition kind of thing, which is like the whole concept of grouping I just find so totally tiresome."

"We're making music here, and we're not fools. We wouldn't go out and do it in front of people unless we thought it was something worth playing for. I think honestly, people that come from the original days of rock'n'roll, if you dug them out in a bar somewhere and talked to them about it, they'd pretty much give you the same schpiel. I think it's the commercialization thing that's caused people to band together in disparate little groups for mutual ego support, and so forth. And lots of money. If I want to make lots of money I'll get a real job, you know. It's not like I didn't go to college or anything."

"What could I tell about Robyn Hitchcock? He writes in code, and it's my proud boast to have never written anything that can't be said in ordinary speech at a bus stop. Of course, having said it, someone might say he's a bit odd. At least it could be said, and it would make sense as an English sentence. I think his lyrics are quite good, and I think his guitar playing is beyond belief, totally underrated guitar player. We don't do the same thing, anymore than I do the same thing as the Kinks, or XTC, or anybody else. `Cause it's just coming from one guy, it's just me doing that."

"It's great when you go to a show and someone says, `I thought you were great.' And then they say, `Have you heard the new John Cale album?' You sort of like, get off on that. It's always nice. It makes you think you're doing it for a reason, it's worthwhile, apparent, and clearly worthwhile to other people, which is really rewarding."

A matter of expression...

"It's very nice for all of you to contribute to my therapy [laughs]. It really is. People are paying me to do my therapy, and I get to show off as well. I guess that's part of it. Hey, I'm not Daniel Johnson, or anything. I don't like people to think I'm a professional looney for fun and profit because I'm not. In respects, if I'm looney, it's only because someone's enraged me or something."

"You have to be a looney to get one of those! Ambitious teachers, a little treadmill, you know. I kept passing scholarship exams. I'm good at passing exams, what can I say? Get out early, give the bastards what they want. When I left college I swore I'd never take another examination, knowing how in a sense I had given the bastards what they wanted. I'm getting what I want (I wish I could remember that one and just spew it out whenever I want)." [laughs]

Who's paying for this call?

"I don't know how it really works... record companies spend a lot of money promoting your record, but at the end of the day it takes longer before you get paid, doesn't it? But then someone from the record company told me I was going to make lots of money off this record. Maybe they're just stringing me along, huh? Maybe they think I'm young and naive, instead of old and twisted."
Visitor Feedback
No comments yet for this page [Add your own]