Louder Than War The Butch is Back… the return of The Jazz Butcher!
September 18, 2014
Credit: Andy Barding
Source: louderthanwar.com

The Butch is Back… the return of The Jazz Butcher! 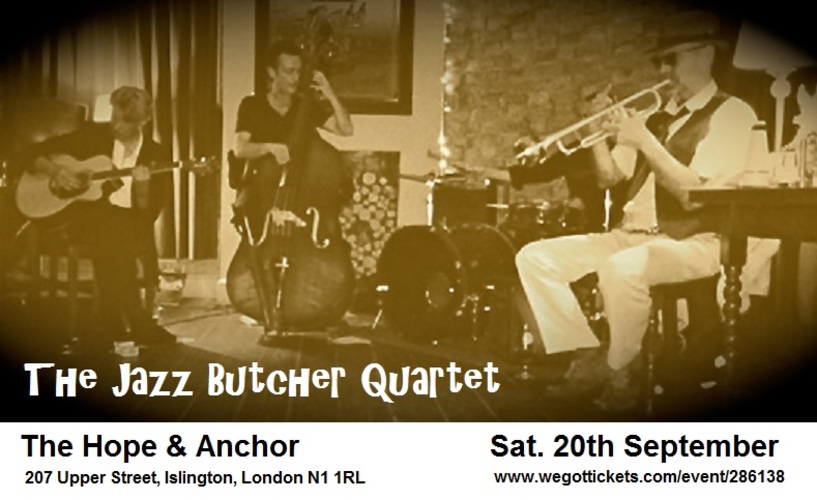 First came the Conspiracy. Then the Sikkorskis From Hell. Now, following thirty illustrious years at the coalface of sardonic and darkly comedic indiepop, Pat Fish is back with a brand new thing: The Jazz Butcher Quartet.

Northampton’s cheekiest troubadour is best know for his twisted, obsessive songs. Tunes which focus a little unhealthily on dead authors, dead actors, elephants, tigers, chickens and Mark E Smith. His albums, eight of which came out through Creation at the rabid insistence of superfan Alan McGee, are consistently hailed as classics of their genres – whether that might be the Birthday Party-meets-Janglepop of ‘A Scandal In Bohemia’, the full-on VU assault of the live record or the super-twee sweeping sounds that are the hallmark of ‘Distressed Gentlefolk’.

He’s big in Oxford, bigger in Hamburg, and bloody big in Japan – where he makes his very long-awaited live return later this year.

But he has chosen somewhere closer to home, London’s semi-legendary Hope and Anchor, to launch his all-new Quartet this Saturday. Here, in an exclusive for Louderthanwar, Pat Fish tells us what it’s all about…

“In the early months of 2014 a friend offered me a little money to book bands into a gin palace that she was opening. We had a meeting and I went away with a fairly good idea, I thought, of what she wanted and what she would be able to afford. In the pursuit of my new objective I spoke with a couple of musicians from around town who, I thought, might well be up for being paid good money to play background standards as the gins went down.

The first two players that I asked both immediately said the same thing: “What, with you?”

This really wasn’t what I had had in mind at all, but these were cool guys, so while the booking job went more and more to hell, I started a little recreational jamming with Steve Garofalo and his tiny drum kit and Steve New with his enormous, beautiful double bass.

Steve New was recently back from playing on the ships, travelling all over the world playing anything and everything as he went. Now he found himself re-united with Steve Garofalo, who had been his partner in rhythm since the early eighties. The two of them played for many years with Northampton’s legendary Tom Hall and in other bands besides. From the very first tune that we played together, I could sense the understanding and feeling that they had between them. And I could feel the swing.

The Steves are educated men from a much deeper tradition than the ones that initially inspired me. When Max Eider and I were failing to get into Ronnie Scott’s to see Nina Simone on her legendary run of dates, Stevie G was there to watch her come stamping into the club carrying her shopping and cussing out the boys waiting on the stand. At the time I was first discovering the Living Room scene, the Steves were out the back of a theatre in Milton Keynes rolling a foot-long spliff for Slim Gaillard.

I can’t remember the name of the first number that we played together but I do remember saying immediately afterwards “Wow. I don’t deserve this.”

We continued to play each Thursday for a few weeks with no specific end in mind. Perhaps, we thought, if I could somehow repair the damage done by my rubbish attempts at being a booking agent, we might get a nice gig at that gin palace. To be honest, we were having a really good time, enjoying one another’s company…developing, in fact, the kind of collective personality that marks the best bands.

Stevie G had a copy of the latest Jazz Butcher album, Last of the Gentleman Adventurers, and – for the want of something to play – we started learning up the songs. We played quietly, acoustically, in Steve’s kitchen. It was a fabulous experience to be able to fingerpick acoustic guitar and sing acoustically with a full-on rhythm section. It was luxurious. It also sounded astonishingly close to the sound of the actual record, something which we hadn’t particularly been expecting. It seemed that the band and the songs suited each other well.

After three or four sessions, Steve thought that it would be as well to check with his next door neighbour that our efforts weren’t disturbing her in any way. She didn’t know what he was talking about.

As the spring began to take a hold, so we began to realise that we had the germ of something potentially pretty entertaining here. We were adding songs to our repertoire at ridiculous speed, sometimes almost at the speed of thought. Thinking that we could perhaps use a lead instrument, we invited Steve New’s colleague from the ships, trumpeter Simon Taylor , to come and have a play.

I still don’t know all that much about Simon but he has clearly been there and done that. Legend has it that he backed Harold Melvin and the Blue Notes on Top of the Pops. Why not? The Steves both played several gigs with Wayne Jackson.

Simon fitted in immediately; a dry, stylish beatnik with a good ear and a worldview every bit as cynical and twisted as you need to operate within the collective solipsism that we had already built up. I can recall at one point remarking – perhaps controversially – “They’re farming us, man!” From the band came nothing but earnest nods and resigned grunts of assent.

Summer arrived and the French Windows in Steve’s kitchen were thrown open to the courtyard. Rehearsals began to stretch out into marathon affairs, with breaks for luxurious dinners, drinking and smoking. Close friends would sometimes come and hang out, enjoying the vibe. You know, like people do when they are in their teens or early twenties.

We reached the conclusion one evening over a particularly fine dinner that, even if we were to have a Number One record, life probably couldn’t actually get any better than it already was. Nonetheless, we had become a band and there’s not much point being a band unless you are going to play for people. We knew that we had to try to export the vibe that we had built up in Steve’s kitchen. We resolved to play our first gig without a PA system.

We took hold of the upstairs room of a fashionable local bar. In the time that people usually spend shouting “One…two…” we decorated the room, added flowers and incense, brought in Steve’s ancient wooden gramophone and a bunch of old blues records to serve as the “disco”. Somebody later congratulated us on the “Limehouse opium den vibe”.

We played nearly all the Gentleman Adventurer album, a couple of old Jazz Butcher tunes and covers including Davy Graham’s “Neighbour Neighbour”, Slim Gaillard’s “Dunking Beigels” and Rosetta Howard’s immortal “When You’s A Viper”. The audience of about 40 people, bless them, sat pin-drop quiet for an hour and a half, then went mental at the end.

Two more local shows followed, the latter at the Parlour, the very gin palace that had accidentally set the whole thing rolling. By that time the band was playing numbers that it did not know. Numbers that might, indeed, not even really exist. The people at the Parlour declared that we were exactly what they had been looking for. Funny how things turn out.

In August, Simon took a sabbatical while the great Max Eider came in to play a couple of dates with the band. An unbelievably eventful three date jaunt down to the south coast nonetheless brought concrete proof that the core of this band was indestructible, axiomatic…right. For the first time we took on rock type venues with PA systems and our sound still worked.

Now, with Eider retired to his Northern fastness, Simon (or “Jimi Hendrix” as I like to call him) takes up a full-time role and the band becomes officially The Jazz Butcher Quartet. Because we are so sonically versatile we can play in rock clubs, bars, living rooms or fields of sheep. We want to play out anywhere and everywhere. We have nothing better to do!”

The Jazz Butcher Quartet makes its London debut at the Hope & Anchor, Islington, London N1 on Saturday 20th September with special guest supports Elia and the Low Tears and Texasbob.