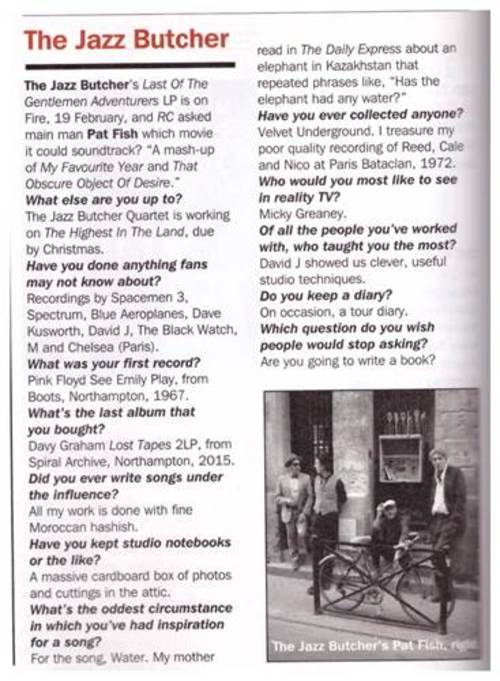 The Jazz Butcher's Last of the Gentleman Adventurers is on Fire, 19 February, and RC asked main man Pat Fish..
RC: Which movie could it soundtrack?
Pat Fish: A mash-up of My Favourite Year and That Obscure Object Of Desire.
What else are you up to?
The Jazz Butcher Quartet is working on Highest in the Land, due by Christmas.
Have you done anything fans may not know about?
Recordings by Spacemen 3. Spectrum. Blue Aeroplanes. Dave Kusworth, David J, The Black Watch, M and Chelsea (Paris).
What was your first record?
Pink Floyd See Emily Play from Boots, Northampton, 1967.
What's the last album that you bought?
Davy Graham Lost Tapes 2LP from Spiral Archive, Northampton, 2015.
Did you ever write songs under the influence?
All my work is done with fine Moroccan hashish.
Have you kept studio notebooks or the like?
A massive cardboard box of photos and cuttings in the attic.
What's the oddest circumstance in which you've had inspiration for a song?
For the song, Water . My mother read in The Daily Express about an elephant in Kazakhstan that repeated phrases like. 'Has the elephant had any water?'
Have you ever collected anyone?
Velvet Underground. I treasure my poor quality recording of Reed, Cale and Nico at Paris Bataclan, 1972.
Who would you most like to see in reality TV?
Micky Greaney.
Of all the people you've worked with, who taught you the most?
David J. showed us clever, useful studio techniques.
Do you keep a diary?
On occasion, a tour diary.
Which question do you wish people would stop asking?
Are you going to write a book?
Visitor Feedback
No comments yet for this page [Add your own]