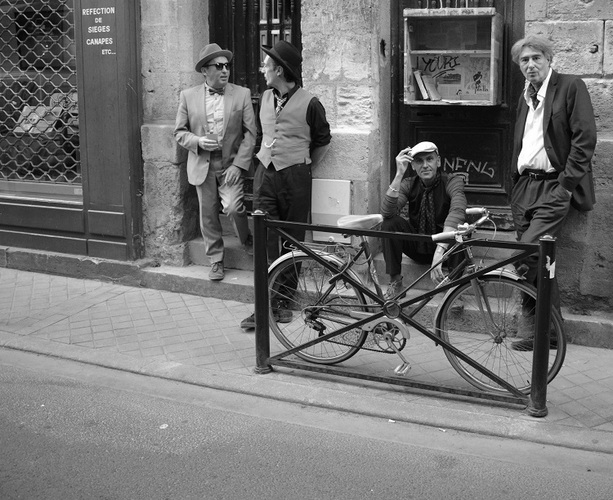 Formed in Oxford in 1982, The Jazz Butcher Quartet (or The Jazz Butcher, The Jazz Butcher Conspiracy, The Jazz Butcher And His Sikkorskis From Hell) are of those best kept secrets for real fans & followers of underground movement. Alan McGee's Creation, David E. Barker's Glass Records & Vinyl Japan are three of the labels  that have "invested" on this immaculate band, whose founder Pat Fish remains a dedicated music poet totally irrespective to today's music biz. Their comeback album ‘Last Of The Gentleman Adventurers' finds the quartet in its best form ready to hit The Continental stage on April 8th, along with The Jasmine Minks...

So Pat, feel free to inform us about the latest news about The Jazz Butcher Quartet…

We’re just very happy to be up and playing again. It’s been a year since we lost Steve Garofalo and at times it felt as though the whole beautiful Quartet adventure was over. Everything had been going really well for us, and then it was all shattered by poor Steve’s demise. But we have re-grouped, enlisted a brilliant and conspicuously youthful drummer and we’re coming back out. We are looking forward to playing Preston so much, you would not believe it.

Well, this thing never really quite stops. During that hiatus of which you speak Max and I played electric band gigs and duo appearances in America (4 trips), Japan (twice), Germany, Belgium and the UK. The trigger for the new album was Max phoning me up and reminding me that the band’s 30th birthday was impending. He wanted to go on a tour. I thought we couldn’t get any gigs unless we made a record. So we went and made a record. We funded it through PledgeMusic, whom I would recommend to any artist. They were great and our supporters were very generous. It was a very happy experience and it re-connected us with some good people. So I suppose it rather looked as though we had re-surfaced at that point, but, in fact, we’d been taking what chances were offered us all through the decade. When things really did start to look washed-up for me was at the start of 2014, when I was feeling my age and really couldn’t see a practical way forward. At which exact point, by happy accident, I ran into the gentlemen of the Quartet. One afternoon jam session and we had it, right there.

On April 8th you are appearing live at the New Continental along with The Jasmine Minks. What should we expect? Any new tunes?

From Thatcherism to Brexit! What has Jazz Butcher to state about these? Is your art influenced by socio-political change/instability?

In 1989 Mick Mercer wrote in a review of one of our records “Good old Butch – bringing you tomorrow’s shit – today!” Bless him. The bizarre and incessant spite of the wealthy towards ordinary people has always been a constant irritant. Sometimes we treat the matter lightly, try to mock the mediocre clowns who run our country like a government of occupation. Other times, being reasonable people, we feel obliged to do a bit more screaming and shouting. Your first two albums were released by the seminal indie label Glass Records. Is there anything special you’d like to share with our readers from this period? How was the relationship with owner David Barker?

Indeed, Dave released our first four LPs. He took us from a shambling mess in the back room of the Black Lion in Northampton all the way to sold-out shows at the Roxy in LA, via a roller coaster of mad European tours, on which he would often join us. He used to feed us cassettes, steering our impressionable young minds in the right direction. He paid for us to muck about in recording studios and brought us the lives that we have had. He is also extremely funny. D. Elvis Barker is a genuine unsung hero of British rock and roll.

Continuing specifically your 1984’s ‘A Scandal In Bohemia’ featured guest appearances from David J and Kevin Haskins of Bauhaus. How was the collaboration like?

Kev didn’t play on ‘A Scandal In Bohemia’, though he did play on a couple of our records. We last played together at some gigs in LA in 2009. He is still very handsome. Vegan diet probably helps. It was Kevin whom I got to know first, just socially in Northampton. Dave was probably checking it all out from his secret Antarctic Headquarters. When we did meet, we both knew that we should do something. The original plan was that he should produce ‘A Scandal In Bohemia’. After a very strange three month period of bass-player rustling too complicated to relate here, he ended up joining the band as our bass player, in which capacity he ended up doing ‘...Scandal..’ and the follow-up ‘Sex & Travel’. After the making of that record he went off to start Love & Rockets, but we have remained good pals and collaborators to this day. I’m hoping to be playing some shows with him in France and perhaps London later this year. You have released 7 albums in the row through Alan McGee’s Creation label. What can you recall from this era? Would you collaborate again if there was a possibility?

Recall? From Creation? Have you not read the books? Seen the fillum? No, I jest, obviously. I love Alan McGee. And I remember everything. It was a great time. We assembled a great little band. If we weren’t in the recording studio or the rehearsal room, we were out playing gigs all over the world. Eventually we made a couple of good records, too. ‘Cult Of The Basement’ and ‘Condition Blue’ are two of my favourite Jazz Butcher records. I can’t see much future in Alan and me collaborating on anything serious right now. He’s looking after The Jesus And Mary Chain and Black Grape and plenty besides. That said, I really wouldn’t mind playing that little chapel he’s got down in Wales. We have talked about it. Maybe one day.

Your sound has been tagged under indie pop/jangle pop genre. Would you agree on this?

Not at all, no. I do not recognize “indie” as a musical term. To me it is simply a way of doing business. Sometimes, it is true, our guitars have been known to jangle, but I would prefer to think that they have more often been known to shimmer, glide and occasionally astound. But that is catalogue talk. The Quartet took the ‘Last Of the Gentleman Adventurers’ as its starting point and has moved on from there. What you will be hearing at The Continental is about as far away from “jangle pop” as it is possible to go while remaining on the same land mass.

Your latest offering was the excellent self-released ‘Last Of The Gentleman Adventurers’. Why did you choose to release this by yourselves? Artistic freedom?

We hadn’t put out a record since 2000 and we had no idea about who or what was out there anymore. All we really knew was the dire stuff that one would read in the papers about the demise of the music business. Man, you could see it on the live circuit back then too, for that matter. I knew a couple of people who had made albums with Pledge and I noticed that they had both gone back and done it a second time. I spoke to them and was both well-advised and encouraged. Then I saw that Viv Albertine was doing a project on there. Well, if it’s good enough for Viv, right? The big lesson is that you don’t have to be Radiohead to make this work for you. Just a few loyal fans and a few good “incentives” to your supporters and you can do what you want to do. With some trepidation I hit the “go” button on our PledgeMusic project at teatime on a Friday. By bedtime we had 125% of what we had been asking for.

Being a man of vital music experience, how would you describe the current Oxford scene? Any interesting bands/acts we shouldn’t neglect?

I don’t live in Oxford, so the only band I really know there is my friend Matt Sewell’s band. They’re called Charms Against The Evil Eye. Hell of a name chaps! In Northampton, where I live, Mark Refoy’s Slipstream are very, very fine. I just saw them last night. Mark and drummer Jonny were in Spiritualized, the other guitarist, Jason, also plays for Tame Impala, and Tim Harries is on bass and he’s played for everybody, including us. Four really experienced musicians playing very simple, beautiful psychedelic rock and roll. And a Johnny Thunders cover. You know, if I reckon they were called anything but Slipstream, they would be as famous as they deserve to be. The Moons are a good Northampton band, especially if you are a mod. They’re mates with Paul Weller and a couple of them play in his live band. The Lords Of Thyme have a lovely folk-rock thing going on. They have two EPs and an album out through Sunstone Records. Liam Dullaghan has moved out to Kettering, the mad bastard, but he remains quite the most wonderful singer-songwriter type to grace Northampton in a long, long time.

What’s on the horizon for The Jazz Butcher Quartet?

Preston, London, London again. Fire Records are organizing a re-release of all the old Jazz Butcher albums. Soon come, as they say. We’re making demo recordings for a new record, too. We’re about 60% of the way towards something good. And it really does have to be good when you’re our age. Otherwise it’s just ridiculous. Most of all, though, we really want to get out and play. Anywhere. You’ll think I’ve been on the ayahuasca again, but the Quartet doesn’t even need a PA to rock you and we can prove it with this footage from a first floor flat in Bordeaux.

A question I didn’t ask and you would like to be asked. Feel free to send a message to your fans.

So much easier to think of questions that I’m glad you didn’t ask. To the people who still follow us and support us I can only say a heartfelt “Thank you. Come and see the terrible things that we have done to your favourite songs.”