The Highest in the Land
It's not often that an artist gets to do a Bowie by consciously carving their personal epitaph into the grooves of their final LP. The Highest in the Land is that rarity of an album, and it could not have been made by a more brilliantly poetic and fearlessly sarcastic writer than Pat Fish, also known as The Jazz Butcher.
Purchase Now
( www.tapeterecords.de ) 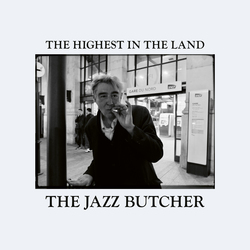 The Jazz Butcher’s Brave New Waves session was recorded on June 5th, 1988 in CBC Studio 13 in Montreal. The recording is taken from CBC Archives reels and remastered at Grey Market Mastering in Montreal, by Harris Newman.