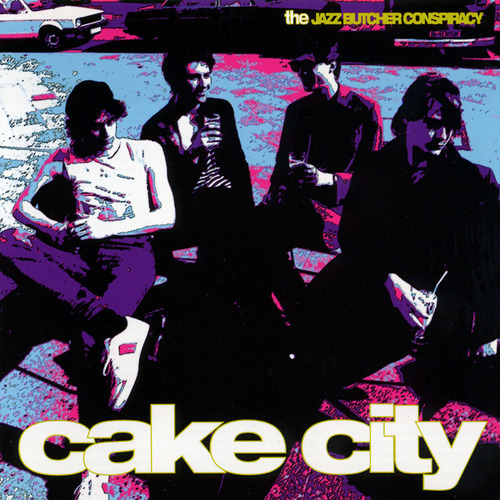 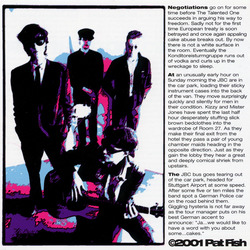 In March 1985, when David J. joind Love And Rockets, the Jazz Butcher Group introduced their new bassist Felix Ray to a hundred or so unconcerned punters in a conference suite in a Northampton basement.

Soon after that night, promoted by ace photographer Mitch Jenkins (who also happened to be the Butcher's flatmate at the time), the Hand Of Hinc intervened, with the result that the band swiftly grew accostomed to ceaseless touring, stumbling and shouting their way across England, Germany, Holland, Sweden, Norway, Italy, Austria, Switzerland and Spain.

Sometimes they would play two shows in the same evening. Sometimes there was trouble "Is he always like that?" was becoming something of a catch phrase. It had reached the point where, if he wasn't actually playing a show or making a record, the Butcher would spend his time shouting at his long-suffering agent down the phone because, frankly, having "gone professional", he no longer had anything else to do.

But the summer of 1985 was good to the JBC in a violent sort of way. Despite the many injuries sustained during the band's first brush with Spain, they were in high spirits. Possibly they thought they were indestructible. (Given that at the time of writing they have just completed their seventh US tour and their first club dates in Japan, perhaps they are. We may never know).

So let us join our ungainly crew as they jet off one September Friday with a view to playing a festival date in the south of Germany the following night. Having been met by their promoter, a very small man in a very large Mercedes, the band are delighted to discover that the festival is in a tiny Alpine village rejoicing in the locally typical but nonetheless laughably quaint name of Trochtelfingen. They drink like sailors and demand money with menaces from the promoter (successfully, as it goes, poor mug!) before retiring in a polite and orderly fashion to their small, charming, family-run village hotel. Friday night in Schwaben. No problem at all.

Saturday dawns bright and lovely. The hotel is all abuzz, for there is to be a wedding. The JBC nod and beam sweetly at the natives before leaving to do a lunchtime soundcheck in a massive candy-striped tent in an Alpine meadow. It is a fine, professional soundcheck, it goes on for awhile, during which the band do not waste the opportunity to renew their still fresh and passionate affair with German beer.

In the afternoon the band's German agent, Joachim, takes the JBC to the extraordinary Schloss Liechtenstein nearby. As they explore the mad fairy-tale castle perched high on a cliff above the village, The Butcher and Max Eider are faintly spooked while Felix beams, resplendent in grey leather trousers, black shirt open to the waist and fake leopardskin jacket. Owen Jones is nowhere to be seen, but those who are curious about his movements are recommended to check out his recordings with his band Shakespeare And The Bible. The posse sits and smokes thoughtfully under a huge and ancient tree outside the castle. It is a peaceful and idyllic afternoon. With beer.

In a disturbing prophetic photograph the JBC can be seen posing at the castle gates. The Butcher is good-naturedly throttling his German agent, while Kizzy O'Callaghan is taking the opportunity to thrust his half-eaten Mars Bar into the singer's ear.

It is around teatime that the cracks begin to show. Returning to the hotel, the JBC discover a number of things and the number is four:
1) The wedding party is in full swing in the restaurant.
2) There is a trolley loaded with all manner of elaborate German cakes just sitting there all on its own in the hall.
3) The newlyweds have left their hotel room door open.
4) Nobody is paying any attention to the JBC

Felix is straight into action. Seeing that many of the cakes have already been partially eaten, he figures that nobody is going to miss them, now. With commendable foresight he decides to liberate a few of them for later in the evening, in case anyone feels a bit peckish, like. It is while stealthily concealing the cakes in Room 27 that he and the Butch find the happy couple's door open. Within minutes their bathroom is entirely stuffed with the hotel's extensive collection of massive pot plants, with a large and elaborate model boat awaiting any intrepid expolorer who makes it as far as the bathtub.

As the sun goes down the JBC slip discreetly from the hotel and up to the massive candy-striped tent. Here all is rock and roll, although, with hindsight, the photographs do indicate that the stage lights might have tended towards a possibly unnecessary shade of hot pink. Still, the JBC rock the tent, take the cash money and continue their research into the amount of vodka that can be poured down the singer's throat.

The Butcher doesn't know it yet, but he has already eaten the last meat that will ever pass his lips. As the band troop into a local restaurant for a well-earned dinner the excitable singer spots a tank full of live crayfish. "Uh-oh" he thinks, "Its' a Which-One-Would-You-Like-Murdered-And-Delivered-To-Your-Plate Sir Scenario".

In a fit of well-meaning but spurious solidarity The Butcher joins Messrs Eider and Jones on the vegetarian tip. It later transpires that the crayfish are, in fact, house pets. By such misunderstandings do we change our lives.

Back at the hotel, all is quiet. Sadly, it appears that the band has missed the shrieking from the bridal suite. The JBC gather for vodka and cake in Room 27. The mood is satisfied, peaceful. There is happy, animated conversation and none of it is about trashing hotel rooms. Drinks and cakes are passed around.

There is no way of predicting the moment. The Butcher is sitting on the floor, leaning against Felix's bed enjoying a massive and particularly well-preserved chocolate cake when in a moment of festal stupidity he makes the fatal mistake of taking a tiny lump of chocolate and flicking it towards the lead guitarist. In seconds Eider is upon him, seizing the cake and grinding it in its entirety into the hapless Butcher's face forever. It all goes off.

Remember: these are men who have had their whole lives in the shadow of the Cold War Bomb. They understood concepts like "escalation" and "massive pre-emptive strike". Within minutes large areas of Room 27 are chocolate-plastered no-go zones and Eider finds himself forcibly imprisioned in the bathroom, a wardrobe pushed up against the door for added security. He responds as any reasonable man would under the circumstances. He riots.

Negotiations go on for some time before The Talented One succeeds in arguing his way to freedom. Sadly not for the first time European treaty is soon betrayed and once again appaling cake abuse breaks out. By now there is not a white surface in the room. Eventually the Konditoreisturmgruppe runs out of vodka and curls up in the wreckage to sleep.

At an unusually early hour on Sunday morning the JBC are in the car park, loading into the back of the van. They move suprisingly quickly and silently for men in their condition. Kizzy and Mister Jones have spent the last half hour desperately stuffing slick brown bedclothes into the wardrobe of Room 27. As they make their final exit from the hotel they pass a pair of young chamber maids heading in the opposite direction. Just as they gain the lobby they hear a great and deeply comical shriek from upstairs.

The JBC bus goes tearing out of the car park, headed for Stuttgart Airport at some speed. After some five or ten miles the band spot a German Police car on the road behind them. Giggling hysteria is not far away as the tour manager puts on his best German accent to announce: "Ja... we would like to have a word with you about some... cakes."