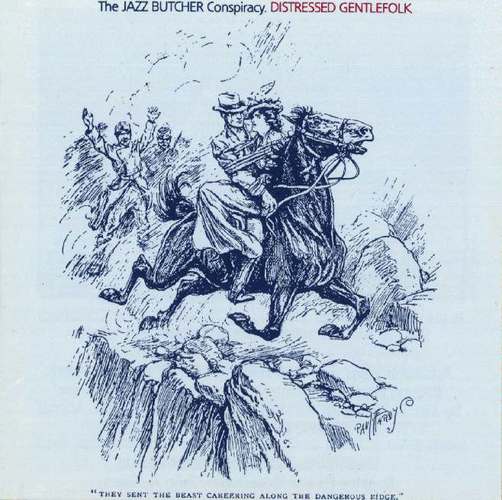 Special thanks and regards to John Silver, Barney, Francisco, Brian at The George, Eric and Julian, Philip and Eleanor and Spacemen 3.

The Butcher Says..
A Sri Lankan gentleman once sat down beside me in a bar in Bremen, asked me to sign his copy of this record, and then, even as I wrote messages of good luck and global harmony, announced sternly "This is a very...bad record." He was a berk, but he had a point. Alan McGee and a number of people in France, America and The Music Business have called this one a "classic album". People do, of course, say much the same about "Dark Side Of The Moon". Can you hear my flesh creeping? Germans, on the other hand, despise it almost universally.

We were deeply confused young men when we made this record. Max, Jones and I had all been drinking dangerously for over a year now, and the poor bass player who replaced David was finding it almost impossible to keep up with our twisted thought patterns. Do you like my bass playing? That's me on Buffalo Shame , South America and a couple of others.

By now, effectively, Max and I had totally lost any sense of quality control on my writing. Tragic and sincere or glib and ludicrous, we recorded EVERYTHING. Sent in to make demos for this l.p. Max and I came out with Conspiracy where we squandered a couple of great ideas that this l.p. so badly needs. John A. Rivers you'll notice, has bought a new reverb unit, a Lexicon, in fact. He's also taken to recording digitally. The ensuing absurd gloss, matched with an absence of native intelligence around the bottom end, gives a lot of the songs a sound that I dislike. ON THE OTHER HAND, there's Angels , Falling In Love , The New World .

Still, in 1986 the best plan would be to buy the 12" single and go see the band in concert. Generally, we had it down in concert. In just about every other department, however, we were coming to bits, individually and collectively, and to me this record actually shows the morbid state of things at the time. Not, of course, that we really noticed any of this until months later, when, confronted by the realitied of having been on an accidental two-year intercontinental binge, we retired damaged, leaving the group in pieces. Oh, and another thing about Gentlefolk... it's pretentious too.

We never got ours at the CFRC radio station at Queen's University In Kingston. I played this album every week a cut or two ( three yes oh yes, oh yes from it such a great collection of thoughts

Hmm wonder who nicked the inner sleeeve?
Wow inner sleeve just found out aboot it here n NOW...
Oh boy somethang to look forward to if somebody could post what that man said.

Wow I love this album!
I was just trying to arrange for the cover to be put on a proper shirt? FOR DISPLAY!
This is a magic album with the magnificence of the parity with the works of the Beatles which I did say to you outside that gig your band played in Hamburg Germany 1988. I told you if'n John Peel did not have his head so far up his ass he would have understood this wonderful album.
the cover is just the push over the edge chance meeting with fate it require.
Again, Absolute magnificent work fellas from Falling in love my wife sometimes hums along to. Hey she never asks me of the song names but this one just stuck in her head. Thanks for that.
And Buffalo shame is glorious details of the Upper Canada foray into the wild west!

Too bad John Peel was such a fucking asshole..You guys were my favourite band of the 8o's I can';t believe what I am reading here. Duffus from Bremen?! Just another really another mother F'n Peel guy cut out Hey..just peel em off and roll!
Now where to get some one to print off a shirt for me? During this Chinese - Covid 19 pandemic?

When I bought this vinyl, I was expecting more of the same from the first 4 albums. I think the only reference to drinking was your"waking up each morning in a new hotel, trying to make it to breakfast, & sometimes doing quite well." Well Pat, sometimes even the best laid plans go wrong, & I will meet you on that corner with another pair of sunglasses on. I was originally disappointed, and considered it your "Country" album. But as you said, the best for last, Angels. I wore that track out. Overall, it is a good album. And if you're into ranking systems (not me - ,mine is 0-1, no or yes, this is a yes) I guess you pick one album to be the best, and one the worst. I say screw thta, and yes your bass playing on South America (Gift of Music volume 2 for me)

I think music is good, it's only our tastes that differ. Thanks for the background on its recording, signing all my vinyl/cd;s, and being so nice to me and my mom.

Was playing my first pressing
Brit in Port was looking for list of people on inner sleeve
And came across Pat's thoughts about the lp! Well we must thank him for getting it so wrong to him self,we looking at the other coments were the better for it.A beautiful lush cheeky at times yes but a wonderful vynil from the 80's

Glenn Presely/Toronto Can. 3Oct2017 8:00 PM
Mystified by Pat's evaluation of the album

This was my first JBC record, and I still consider it their best. It is definitely one of my desert island records.

Loved this album upon its release, haven't stopped loving it since. The only thing that changes is my favorite song on it, which is typically the one that is playing at the moment. Carried away on waves of digital reverb.

I don't understand why you're so down on it. It's the crowning achievement of the Max era.

I bought this record in '88 and it really impressed on me a moment in time that is still there (me mind). I want to thank all the butchers for creating some
of the greatest music i'll always enjoy! Illuminate is also very good.

I came upon Distressed Gentlefolk years ago in cassette form and bought it without having any idea of what it was. I am glad I did. It is one of my favourite albums of all time, and my children, who were small then, loved it too, especially Domesticated Animals. My eldest daughter, who is very fond of pizza, thought one song was about a Pizza Lorry not Peter Lorre.
Tragically it is now worn out and I would dearly love to be able to get hold of a CD copy. I also have Fishcotheque on cassette which is also in a bad way. I have never come across any of the other albums.

Catherine Mason, Newfoundland 23Apr2007 6:06 AM
I bet all his clothes were made in Thailand

This is one of about 30 vinyl records that I actually hauled cross-country, since it's really indispensable IMHO. Back in the day (1988?) I worked out the chords to Nothing Special & would perplex people with my rendition...

Anyone know the identity of the people on the Distressed Gentlefolk sleeve? Here's a start from starting with upper left and going in concentric spiral clockwise (numbered by go-round, guesses described without name - most all except obvious are guesses and didn't check spelling):

That's all for now. Any help or insight as to inspiration would be appreciated.

I think this is a Fine album. Just found it again (once in a while I dust off the old vinyls and crank up the Leak) and I'm back in my carefree teenage years - ahh bliss.

This is the only JB album I posess (or have heard) so I'm kind of scared of destroying the illusion - since the JB's comments about this album are mostly dirogatory, does this mean that The rest of the discography rises to even giddyer heights of brilliance, or won't I like them at all?

Anyway, thanks for this one - even if the rest turn out to be pants!

i've always had a soft spot for the butch (and Max!). to me DF is maybe not the wittier but the most wholesome record they made. some great ballads, a good dose of humour (hungarian love song) and some near-Lear nonsense. maybe a trifle too polished, but it has been my mantra for ages and I can't betray it now (or never).

OK, I can see that. But as a big fan, it all seemed like a very good in-joke. I loved it. I still think "Buffalo Shame" is the best dual-purpose children's song/80's obscure alternative song I know.

Ok, maybe it's just me, but I think of "Distressed Gentlefolk" as a great Christmas record. I must have bought it on Christmas Eve and listened to it all the way to new year's Eve, and always found it wonderful. I still think it's one of the finest 80s records in my collection. And most of my friends don't even know what it is, which is cool :)