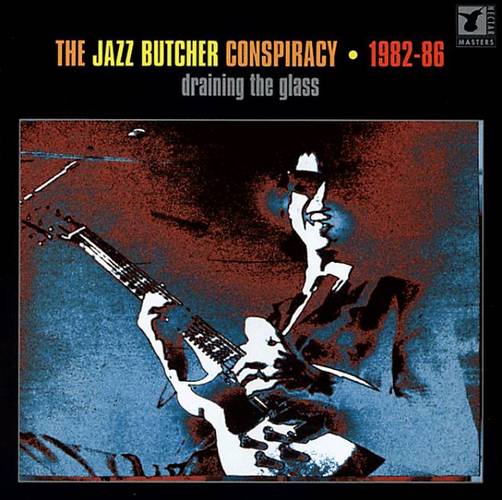 Special thanks to Pat Fish for his co-operation and enthusiasm.

From The Sports Desk Those who saw the Jazz Butcher's earliest performances might well be forgiven for entertaining the notion that here were farcial drunks with no drummer, best euphemised as 'eccentric' and kept at a distance. As the highly excitable Butcher and dapper, unflappable guitarist Max Eider careered from one ill-advised engagement to the next with a constantly changing band of friends, they delivered a series of wildly erratic shows driven by blind faith and the systematic abuse of cheap liquor. It was hard to tell if these people were for real. They would roll up in an open-top Triumph Vitesse with bits of drum kit sticking out the back. Sometimes the Butcher would ride the tube to shows, wearing his sailor hat and carrying his guitar in a cardboard box with a huge drawing of E.T. on it. Of course, it was the only way they knew how.

In January 1984, Max & The Butcher were engaged to appear at a London Polytechnic. The ensuing debacle, fuelled by Carlsburg Special Brew, saw them both walk offstage at different times, and climaxed with their shadowy friend, The Antchrist, shouting pointlessly from a step ladder. Word is that they found Mister Jones, the drummer, the following day. Soon after, Steve Musgrove joined in to play bass and a band existed.

Glass Records supremo David E. Barker had built up some curiosity around the Butcher's deceptively professional early singles, and the group now found themselves playing to people who wanted to see them. Some were disaffected goths, many were Japanese, one of them was David J. , architect of Bela Lugosi's Dead and eagle-eyed pop detective. Divid had been watching this nonsense for some time, and soon befriended all the musicians. With a few dozen beers David signed up 'on loan' to play the bass, and made his debut with the band at Alan McGee's Living Room club in a tiny bar in North London.

That was the start of a busy year, from which many of the recordings on this collection come. David and producer John A. Rivers taught the band a host of tricks, resulting in the first really professional Jazz Butcher L.P., A Scandal In Bohemia. The band also developed an agent and a van. David told the group about The Rider, and they saw that it was good. In December the group climbed under a duvet on the floor of a Ford Transit and headed for their first European Dates. They played two magical nights in Hamburg that shaped the lives of many involved. They drank gluehwein in a lakeside cafe on a Sunday afternoon. The Butcher, whose first reaction to being in Germany had

been to hide under a table, had some kind of small epiphany. They blew all the money in Amsterdam on the way home.

Over seven extremely wintry days in January 1985 the band completed another L.P. Mick Mercer (who pointed out that these boys were born the year that Elvis joined the army) had once prophesied that the Butcher's 3rd L.P. would be called 'Doctor Cholmondley Repents'. But they were young, they were headstrong, they called it Sex And Travel. It is the sound of a band at the peak of its creativity, and anyone who saw the group on the ensuing British dates would have a very different opinion to one who had watched the Butcher plummet from the stage of the Embassy back in 1983.

Spring 1985 was time for David to go. The man called Felix Ray arrived with his big Italian acoustic bass, and the endless touring began. Between March 1985 and December 1986 the Jazz Butcher group played over 200 shows in 12 countries. They took to the life of the amplified itinerant with gusto, even surviving an early setback when the bus seized up in rural Sweden, forcing them to travel in a group with as much equipment as they could carry by train to the next date... in Zurich. They survived, but only just. And Felix no longer believes that Switzerland is next door to Sweden.

The band took to Europe and vice-versa. There were festivals in tents with people waving flags, lost weekends in Vienna, mad nights in dimly remembered

nightclubs, and vodka everywhere. There was chocolate cake all over Room 27. 'In Europe', beamed The Butcher, 'They treat you like a human being instead of a musician'.

They still had their special nights. A show in Sicily ended with the amplifiers on fire and the Butcher so drunk that he thought he'd got religion. There was a first, brief foray into Spain that saw three of the group return physically wounded and drained of all bodily fluids. As they leaned, croaking, on the Heathrow travolator, they were passed by a planeload of Japanese tourists, each one fresh as a daisy and keen to take a look at their first English person.

In the summer of 1986 the Jazz Butcher Conspiracy, as they now called themselves, found themselves headlining at a festival of Italian Communist Youth in Naples. After the show

somebody asked the Butcher 'Where are you playing next?' and he found himself having to reply 'New York City'. For Barker had been busy, and unbeknown to the group, a compilation of their work was shooting up the American alternative charts. They arrived, bewildered, in New York, to find their album at Number 2, and muddled their way through the North American summer, playing at the top of their form, drinking out of brown paper bags, and striking terror into the Americans by wearing long trousers.

Felix left to court a lady in Montreal, and was replaced by Richard Lohan, while Alex Green , an associate of David J., joined on saxophone. Distressed Gentlefolk was released in October 1986 and the five piece band that toured Britain and Europe in support made a mighty sound; but it was not to last. On a particularly grim night in Switzerland too much liquor, fatigue, stress and frustration drove Max and the Butcher to engage in a spectacular outbreak of dressing-room-fu, which resulted in Max receding from view on a train the following morn. The remaining members finished the tour, the last show being in Zaragoza on 20th December 1986

Mister Jones moved to Germany, where he found new fame gardening for Gunter Grass, playing for the Lost T-Shirts of Atlantis and for his own band, Shakespeare And The Bible. Max Eider released his solo L.P., The Best Kisser In The World in the summer of 1987, but was ill-served by his record company. He can still be seen playing live in London and Hamburg. David J. is in Love And Rockets and Felix is a photographer. The Butcher and Alex Green resurfaced about a year down the road on Creation Records.

In the years they recorded for Glass Records the JBC made four studio albums, a live L.P. and eight singles, none of which have been available for almost ten years. This collection offers

some of the best moments from that period. From the primitive early sound of Bigfoot Motel (where the Butcher plays drums) to the elaborate soundscapes of Domestic Animal and Angels it charts the progress of a gang of friends who stumbled unprepared into a music scene of which they were often deeply suspicious, but which gave them more then they had ever imagined. Here is music that won the admiration of figures as wildly diverse as Mark E. Smith, Tom Waits, REM, Andrew Eldritch, and Alan McGee. Heartfelt, thoughtless tunes of classic pop, high on hedonism and sharp of tongue: 'eccentric' perhaps by the meretricious standards of the times, but they've nearly all got drums. Come a little closer, and enjoy.