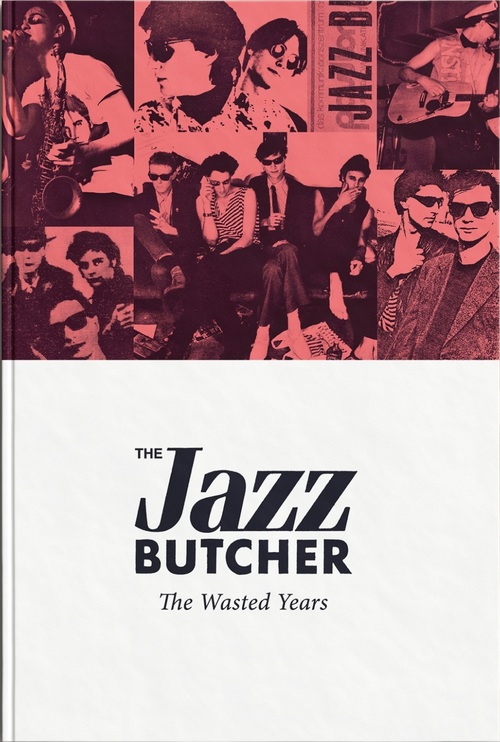 This is a 4 CD boxset/booklet of the first 4 Glass Records Jazz Butcher albums.

The Vinyl District Graded on a Curve: The Jazz Butcher, The Wasted Years Wed, Nov 1st 2017

Sun Burns Out The crazy years of the Jazz Butcher or no pity for geniuses (France), Thu, Nov 9th 2017

Under The Radar The Jazz Butcher - The Wasted Years Fri, Dec 8th 2017

In the early '80s, David E. Barker was checking master vinyl copies of classical recordings for glitches - they don't make jobs like that anymore. In his spare time he discovered innovative souls struggling to make music and welcomed them to his Glass Records label. The roll call included Teenage Fanclub, Spacemen 3, The Pastels and The Jazz Butcher.

The 'Butcher' delivered a gaggle of albums and many 45s for Glass from 1983 to 1986, the jacket notes on the dusty tome that recalls this period mentions Randall And Hopkirk (Deceased), Thatcher, DIY post-punk, LSD, surrealist cabaret, The Velvet Underground, a bottle of Cointreau or two, the Amstrad 7090 and Ronco's 'Black Magic' compilation. All that led to the 'The Wasted Years': Four albums, many visions...

'Bath Of Bacon' was an experiment in sound, conjoining that Ronco platter to Todd Rundgren, a guitar from Wes Montgomery's cupboard and mentions of imaginary monsters set to some funky chops. "The sound of a few mates failing to take note that they've an LP to make!" claims the JB site. It's pop meets bluesy scat with plenty of deadpan irony - a theme that will recur.

'A Scandal In Bohemia' took a "competent little rock band" with a bassist who'd served time in Bauhaus into a world chorused by multi-track vocals and bathroom ambience. "A top-shelf diamond of a record that is filled with excellent, memorable songs." (All Music).

'Sex And Travel' offered a broadening perspective. Competence and European travel beget a narrative akin to an impressionistic cold war spy movie, a "mess of styles" that became coherent. "A great album," muses All Music before comparing JB mainman Pat Fish to Ray Davies circa 1969. It's an "accidental" concept album prone to fleeting melancholy.

'Distressed Gentlefolk', ahead of the original band's demise through "fatigue and liquor" was the Butcher's stab at making their "greatest album ever". "A beautifully romantic record of soft rock ballads and jazzy torch songs," enthused Trouser Press. There's a folky edge scratching away beside the inevitable romp through pop music's historical lineage.

Four albums, then. The '80s recast at an ironic party of malcontents. Indie pop as a soundtrack. Songs that shouldn't fit together - but do. 'Wasted Years'? Yeah, really.