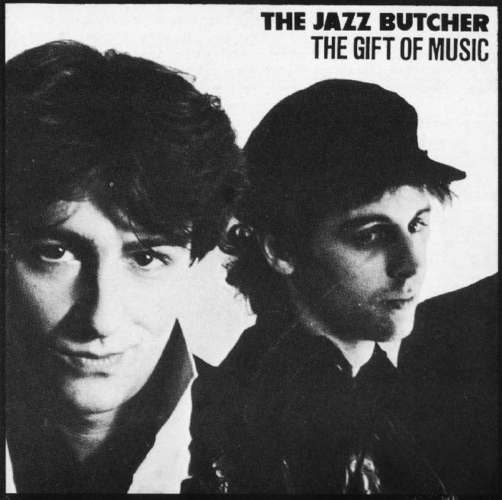 This record collects together the various singles that have been issued in England to date under the much-abused name of the Jazz Butcher, to wit: me.

I rather like having them all in one place like this - it makes for a nice, noisey muck-it-up sort of disc that is ideal for leisure time at home, on the beach, in you local club.... hell, ANYWHERE!!! Let me tell you about it.

Southern Mark Smith and Jazz Butcher -v- Count Dracula were recorded in the summer of 1983 in a place called Wellingborough, a small town in the middle of England where even the children are scarey! "Hey, mister, can you SEE in them glasses?" I get to sing and play things like guitar, sax and piano. Max does the electric guitar. On bass is Rolo McGinty, and Princess Alice Thompson plays the organ. They're both in the The Woodentops now, a group internationally recognised as being the shortest collection of pop musicians in the world. Playing the drums is Kevin Haskins, a charming neighbour of mine, and veteran of the Bauhaus conspiracy. Miaowula!

Marnie and Zombie Love were the hot spots from my second single, recorded in London one Sunday afternoon in January 1984. Marnie is an attempt to force a meeting between the steaming tropical jungles of Bangladesh (where the tigers live) and the frozen stepps of Siberia (where the Siberian tigers live). Zombie Love is just sick. Max and Rolo and me again, with Jody Palmer on drums, bongoes and "Oi'm jest a rual boy on a day out in London, guvnor".

Roadrunner (Richman) features me, Max, David J. on bass, and Mr Jones on drums, and was recorded in Wellingborough again in April '84. The song is by Jonathan Richman, but the sentiments are entirely our own. The "Twilight Zone Mix" on this record concerns Max's inability to get from one place to another without disappearing for long periods. You've heard of the Bermuda Triangle? Well, Max has shares in it. Rain , recorded at the same session, concerns sex and the weather and the undoubted connection between the two. Incidentally, it didn't rain once during the three days we were in the studio!

Real Men and The Jazz Butcher Meets the Prime Minister see the Jazz Butcher Group (me and Max and Dave and Jones) in vaguely political mood. In other words, feisty. Real Men, the kind who never sit together on buses in case they get their medallions tangled. The Prime Minister, a book-burning lunatic, under whose "leadership" the U.K. has become a police-state satellite of the most evil and morally corrupt regime in the world. Locked in the basement in Leamington Spa in steamy August '84, The Jazz Butcher Group reaches for the cheese wire! Gasp at the awesome sound of a guitar massacre in Parliament!

Lastly, from the same summer sessions, comes Water Max and I, late at night, contemplating the curious tale of the talking elephants, and the endless search for supplies of free drink...