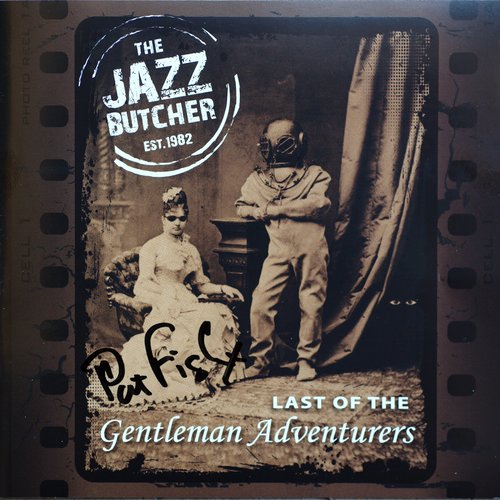 Mastered by Eric James at the Philosophers Barn

All songs by Pat Fish except for Count Me Out, by Max Eider

LAST OF THE GENTLEMAN ADVENTURERS

The Cuban heels are worn down to their cuticle and the spring-loaded derringer has rusted in position up a shiny sleeve. Crows bowl across the Racecourse like black boa tumbleweeds and far too many of the other wanted-poster names are long since taken down: that absent rack of painted clogs in Birchfield Road, an admixture of alcohol and DNA still percolating through Jack Lansbury's spit-trap, Freddy Fingers' glass eye rolling to a standstill on the empty dance-floor, all gone, all auditioned for the Boot Hill Boogie Boys or otherwise dispersed. Inside the legendary saloon, its bar-length mirrors and its framed reclining nudes all plasterboarded now, conviviality swept out through a swing door the moment everybody's cards were on the table. This must be the famous palace that those four-lane highways of excess were always leading to, that makes a body scrape a chair up and take stock.

With blood from an interminable improv on his cleaver ... people say he uses every last bit of a slaughtered solo clarinet except its squeal ... the Jazz Butcher, one of this threadbare island's greatest living songwriters, herein purveys his choicest cuts. All left to hang as part of their extensive maturation process, melodies so tender that they're falling off the bone, a gamey sweetness in the lyrics, this sumptuous salmagundi has the flavour of a signature dish, something left till last.

A work that speaks from a hard-earned perspective and means every word of it, Last of the Gentleman Adventurers is a delightfully ill-humoured reassessment of contemporary culture and the dwindling amount of room remaining for a gentleman adventurer within it. From the atavistic primate yearnings for a vanished jungle-land in `Animals' to the elegiac message-in-a-bottle bobbing on an eerie Californian surf in `Shakey', what we're offered is a scuffed and well-stamped passport to the gone world, stained with Tokay, singed by oval cigarettes you'll never see again. The fatalistic Gallic shrug of `Tombé dans les pommes' lifts a dismissive brow at life's vicissitudes, while `Count Me Out' speaks of the dignified withdrawal from a situation that's no longer either interesting or acceptable.

Far from a weary resignation letter, though, the pieces here more accurately represent a flinty and determined manifesto, a defiant staking out of the unsupervised and teeming wasteland to which our illustrious former territory has been reduced, a vital roster of remaining freedoms. Whether that be in appreciating the bohemian elan of next-door's quadruped or instigating a romance we may be hard pressed to survive, these songs are testimonials to life, perhaps especially to life at bay. The bluesy and relentless rocket of `Solar Core' provides a glorious reminder to select our destination carefully, and never be found wanting in ambition. `All the Saints' and its affecting coda spell out the emotionally conservationist agenda, with a spirited dismissal of irrelevant modernity in favour of pursuing vitally important individual dreams.

This luminous, enduring truth resides at the collection's beating, beaten heart, reiterated eloquently in the title track itself, curling its lip at those who have mistaken BUPA and increased consumer choice for liberty, inciting us to man up and define that precious resource for ourselves. With Messrs Harries, Eider and Mattock as his bearers, the last of the gentleman adventurers here buckles up his pith-helmet and mounts a reckless foray into the interior, heads in the last remaining unexplored direction, the implicit fifth point on our compass. Follow at your peril, from the trail of snapped conventions left behind him, to a province still outside captivity. I'll see you there.

Thanks to everybody who helped us make this record a reality.