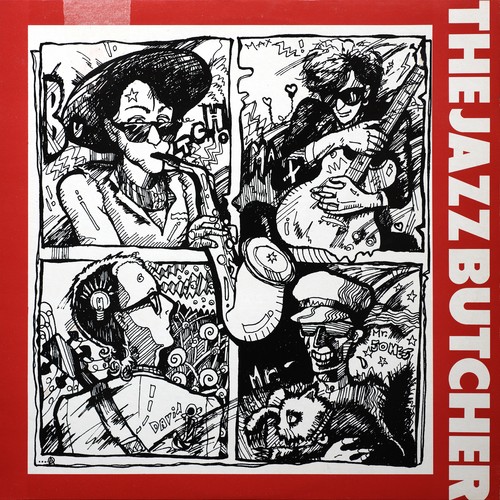 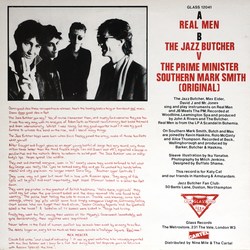 The Jazz Butcher you say? Yes, of course I remember them, and mostly fond memories they are too. It was this very song with its analysis of Adam Faith as Marxist revolutionary that broke the mould and them internationally. Whilst I was roving (as any good reporter must) it was my good fortune to witness this band on the rise, and I learnt many things.

The Jazz Butcher boys were born when Elvis Presley joined the army; make of those two facts what you will.

After fraught and frugal years as an eager youth hatful of songs this very record, only three million times better than the third Frankie single (an old Queen cast off), signalled a change in peculiarities and the nation's desire to redeem its soild past. The Jazz Butcher was on everybody's lips. Herpes spread like wildfire.

They met and charmed everyone, even in `Hi' society where they would be forced to tell what Boy George was really like (yes he bathed every day and yes he washed his hands before meals) and why pop music no longer meant Doris Day. Another cigar Gertrude?

They wore way out of gear but never fell in love with Russian spies. They sang of fish (gills will be gills) and most importantly, kept Hazel O'Connor locked in a cellar ten feet down.

They were pop pirates in the greatest of British traditions. `Hello there, nightowls, they would say but when the pop concert ended and the disco resumed life was found to be wanting. The police kept telling the kids to move on. Trouble was brewing; some took umbrage, others `pep' pills whilst some took simply outrageous liberties, controversy fuelling chart success. Who can forget their third album, `Doctor Chumley Repents' and the questions asked in the house? A battalion of TV screens were kicked in. Things had to stop.

Finally they went too far, waving their winkles at Her Majesty's Government. Immediately, and quite domocratically, their royalties were sequestered.

Never before in the field of human conflict has so much been owed by so many to so few.

The dedts linger on, every bit as much as their mass suicide in Trafalgar Square. Real men.

Claudi Bidi writes "what a load of codswallop! It was my great fortune to be intimately acquainted with the Jazz Butcher and I know for a fact that during those last desparate years he fell in love with Russian Spies all the time."