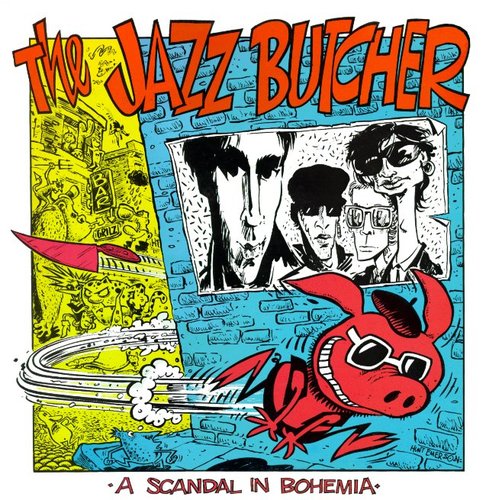 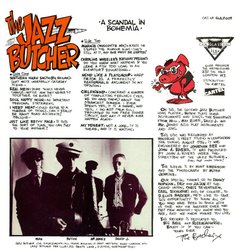 Classification: Album
Label: Glass
Catalogue: GLALP009
Date: Nov1984
Recorded: August 1984, Woodbine Studio, Leamington Spa
A-Groove: would you like to swing on a star?
B-Groove: or would you rather be a fish?

Our special thanks go to Danny Hopkins, Eric and Julian at the Grand Union, Chris Seventeen, Earl Sikkorski and, of course, to D. Elvis Barker. We'd like to take this opportunity to thank all of you who have been in touch with us one way or another over the past few months: you know who you are, and we know where you live.

This record is dedicated to Big Basil and Rosemiaowrie. Enjoy it if you can - yours ever, The Butcher X.

Real Men Some things never change. Notice how they never sit together on buses?

I Need Meat Could refer to a number of things. Can it really be about road accidents? Oblique.

Just Like Betty Page Is this the sort of tune you can play to your mother?

Marnie Across the steepes the rumour runs : she's still at it, and she must be stopped!

Caroline Wheeler's Birthday Present Do you know what happens if you leave a fish too long in an elevator? Educations.

Mind Like A Playgroup Warp factor 10. A perfectly reasonable argument in my opinion.

Girlfriend Concerns a number of conflicting feelings (yes, we do have them) about the strangest summer I ever spent. Yes, it is a shame, and yes, I do miss them all. Dedicated to the free dinner circuit, and may it never ever happen again.

My Desert Not a joke. It is there, and it is waiting.

The Butcher Says..
The Albatross. Since the recording of Bath Of Bacon (almost two years before this one) we had become a "proper" group. For all that, we still pooled our skills in the studio, and this isn't a bad two weeks' work.

I think that, lyrically, a lot of the songs are a bit trite and immature, and our inability to take ourselves seriously is much in evidence. A record, I feel, of its time. We were young(ish) and cocky and I think it shows. I still haven't learned to sing on this one, which bugs me too. Still, it was cheap and cheerful, and it helped us to meet an awful lot of people.

I was told, incidentally, that if we released this on Glass we could expect a top global sale of 2,000. We released it on Glass and sold about 25,000 copies.