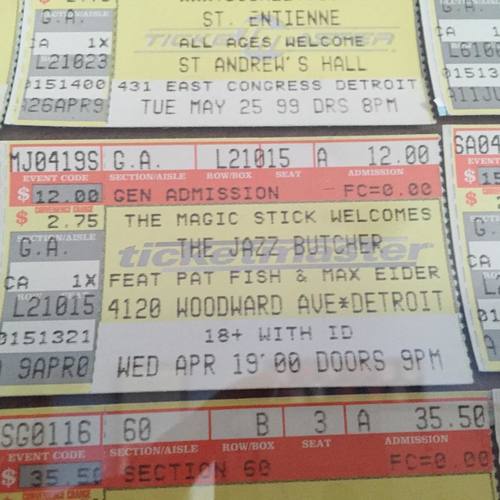 
How was the Jazz Butcher show? They were here last night and they were great. I'm so glad I was able to see them live. I didn't get home until 2:30 so I'm paying for it today, but they're worth it. The club was nice. I had never been there before. It's upstairs from a bowling alley. It's pretty small, and it's half pool hall and half alternative-rock club. There's a good size dance floor, and there are tables behind the dance floor, and on platforms on either side. We sat at a table near the front of one platform. At one point during the first band, Pat Fish and Max Eider sat down in front of us on the platform itself (not in chairs).

I probably won't get the song titles right, but here goes. They started out with just Pat and Max doing It's Party Time and Girls Who Keep Goldfish. Then they were joined on stage by an accordion player whose last name was Jones (didn't catch his first name) who later turned out to be the drummer. They did a couple songs like that, then Jones played guitar and sang one song that was beautiful... it might be called I Won't Keep You or something like that. Then the bass player came out and the whole band was in place.

They played for about an hour and a half. Their songs are so great!! There was a cool song that mentioned Michael Jackson, but unfortunately I don't remember any of the other lyrics. There was another song that had the word girlfriend in the chorus a lot, and that was another really good one. Some others that I remember are Niagara, Sex and Travel, Sweetwater, Mr. Odd, Girl-Go. They did a couple songs that Pat said were new, and I think the names were Daughter Morphine and Come On Marie. Come On Marie sounded Motown-ish, and Pat said he was excited about playing it in Detroit. He mentioned several times that he likes Detroit a lot. He was really funny between songs. At one point they were having equipment problems and Pat left the stage & returned with a notebook which must have been his tour journal. He told us how many eggs the band has eaten during the tour & stuff like that. Despite the equipment problems, they looked like they were having a lot of fun. There weren't a whole lot of people there, but those who were there really liked the band, were yelling out song titles, etc.

Most people stood in front of the stage. We could see good from our table, and I'm beyond the point where I can stand for a whole set anyway. Pat came back for an encore, which was A Thing of Beauty, then the rest of the guys came back on and they played Take the Skinheads Bowling. Then they left the stage, and people were still making a lot of noise, so they came back for another encore. I don't know what it was, but it was excellent. My friend Karen liked them a lot, and wants to get some of their CD's (if she can find them).

The art gallery show was fun too. They only had 3 of Pat's drawings up, but they were cool. One of them had a set list on it. The Buffalo book stuff is great.