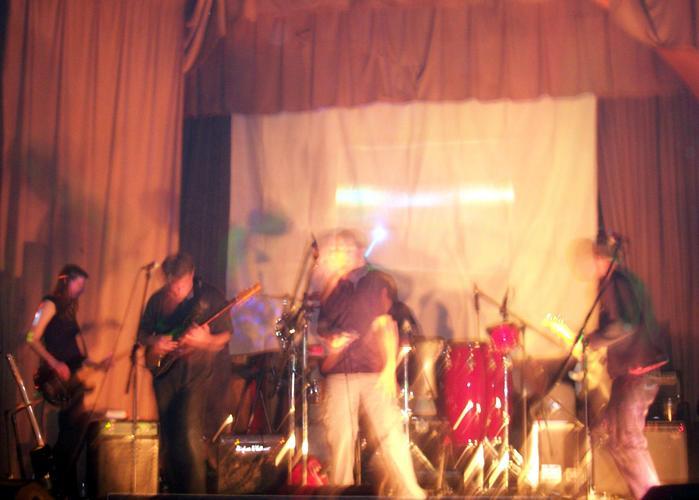 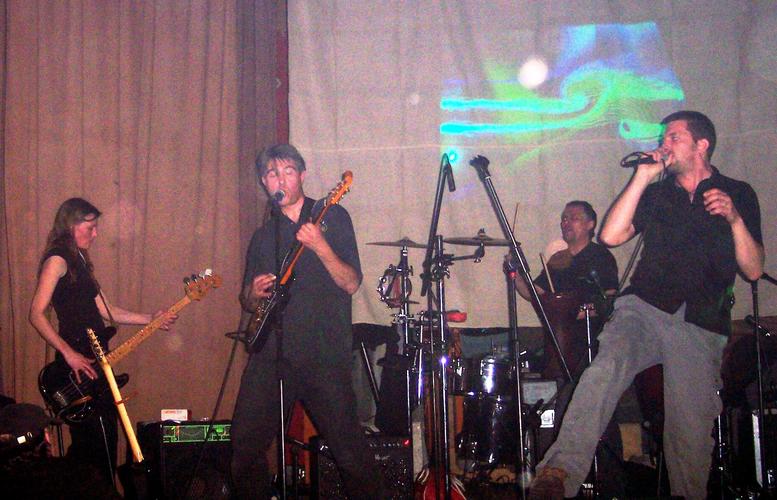 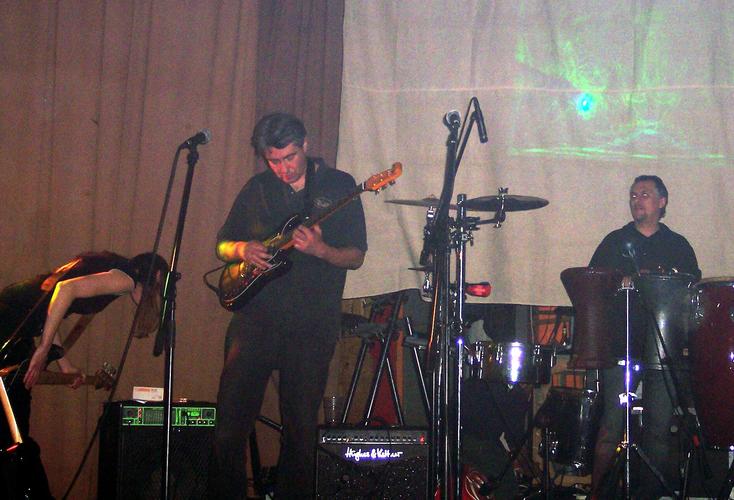 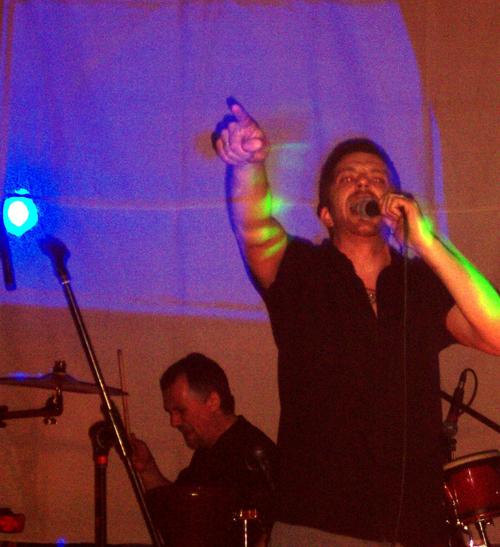 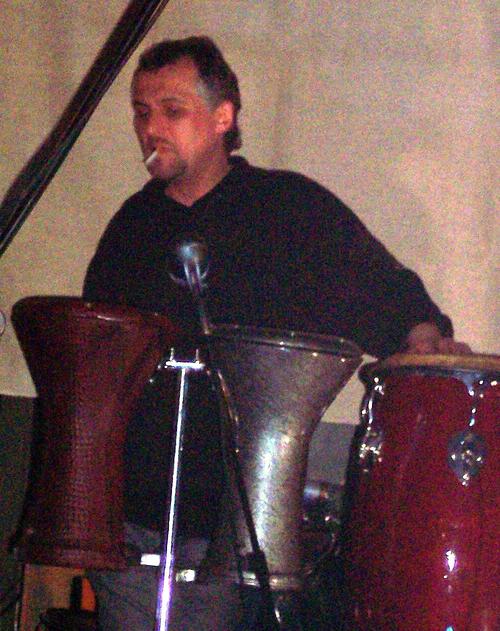 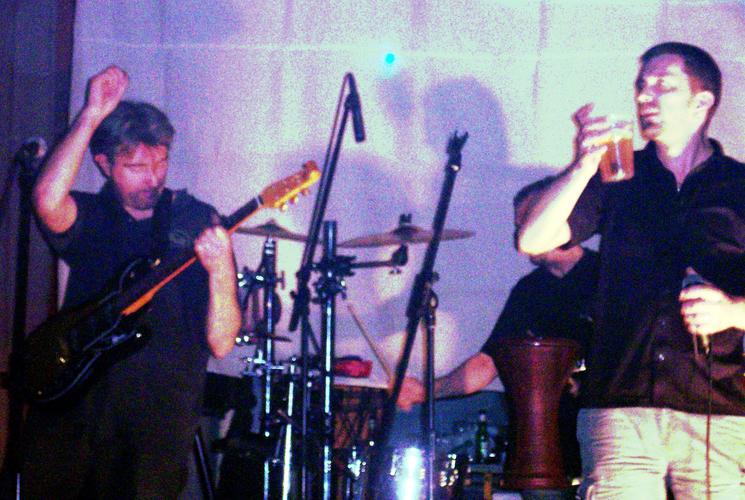 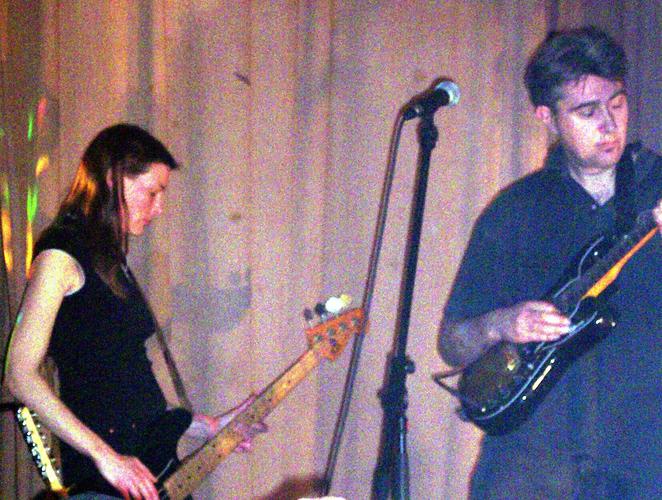 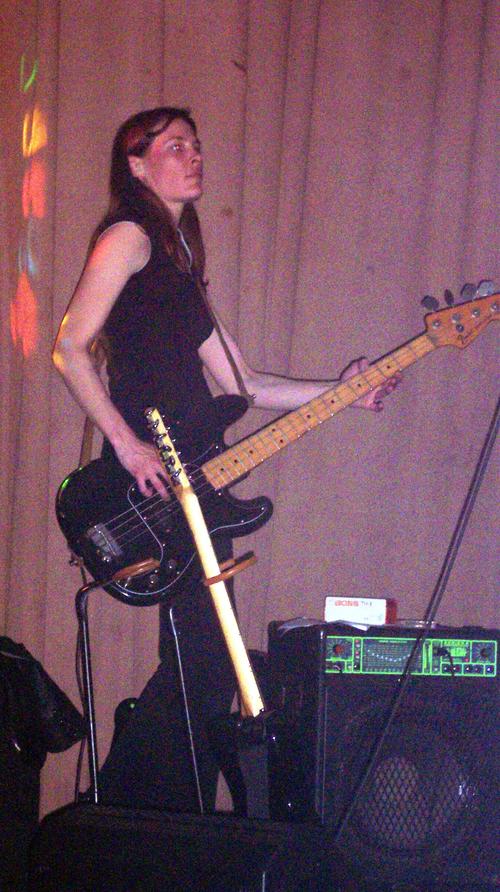 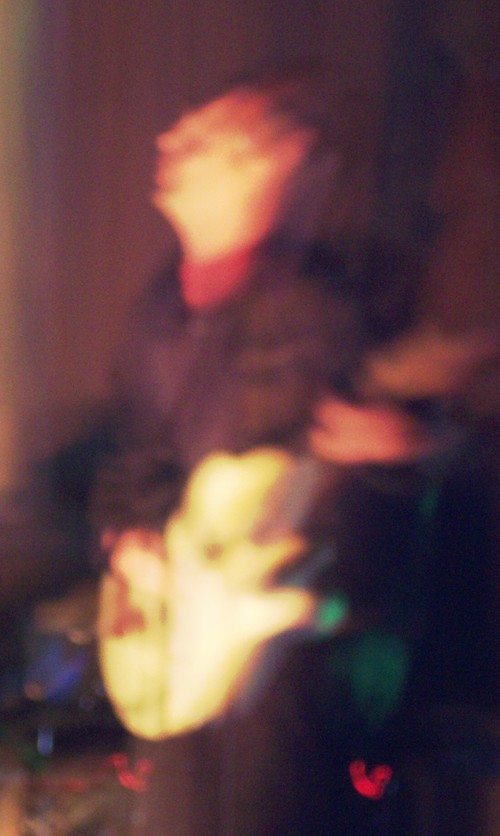 It's a big production: Wilson, P-Hex, Good Cop Bad Cop, A Fat Dog Sound and two Welsh bands! The night will run from 6:00pm to 1:00am. Truly, as Stevie G said, we are in the hands of madmen.

The 2 Welsh bands on the bill are: Brown Thunder - and - Doctor Rhythm Method, featuring the Cross Your Heart Horns.

Tickets are £5:00 and are on sale in advance. Either e-mail Fred at fredryan[at]-remove-hotmail.com or call in and get your tickets from either of The White Horse or the White Hart pubs in Builth Wells itself.

With New Order and the KLF to speed us on our way, Misery, Bot, Kathie & I have an easy time of the 135 mile drive to Builth. On the way we pass the roadside Army Surplus store with the armoured car for sale on the forecourt. We notice that Jamie Jab's new motor is parked up there. Later in the evening he will appear, sporting a magnificent pair of paramilitary chrome goggles. At this stage, Jamie Jab has been up for 24 hours and counting.

We check ourselves into the excellent Edan House B&B, where Wilson, like all the greats, have an entire floor to themselves.It's not that big a house. In my room, on the windowsill, in a strange pentagonal case of wood and glass, displayed on tiny, custom-made wooden stands are two eggs. Two eggs with lovely miniature paintings on them. What on Earth can that be about?

The Strand Hall stands all of seventy yards away from the front door of the hotel. No promoter worthy of the name would ever book a band into a hotel so convenient for the venue. The venue itself is a big old hall belonging to the Council. The organisers of the gig tell me that a lot of municipal arms have been twisted for us to be doing this here tonight. Ticket sales, we are told, have been good, and there is evidence of a massive and elaborate lightshow being set up on the large stage. There is a PA standing up there too, but there is nobody to wire it up. A man is on his way from Bristol, we are told.

Now, one thing that we have grown used to in Builth is waiting. Without so much as a discussion, we acknowledge that there is going to be no point in our milling about here for some considerable time. Kit is parked in strategic positions backstage, ready for a swift set-up immediately prior to playing. The dressing room receives its customary Awesome Baptism of Smoke. Within fifteen minutes we have washed our hands of the Strand Hall and we're back on the charming streets of Builth, bent on hot food.

Some of our number stop by at a little funfair which has set up beside the river in the park. There is a thing there called Monkey Kingdom. Thanos is with us. There are a number of odd little machines there whose primary purpose would appear to be the piecemeal but dogged pollution of the otherwise unfeasibly wholesome Welsh air. Stevie Ward from Good Cop Bad Cop is profoundly irritated by the presence of this fair. He was planning on a quiet night's kip in the van beside the river. No chance of that now.

Later, when Jamie and Yvette decide to stroll down and visit the funfair, it shuts down.

We return to the venue to hear the last strains of Brown Thunder covering Cum On Feel The Noize. It's their first gig. They're schoolboys. They haven't played Glastonbury. We know this, for this is their first gig. (For a few moments overheard an hour or two later in the carpark, it appears that it may also turn out to be their last.) They may be named after a Roy Chubby Brown video. Their bass player later lends us his amplifier after negotiations so complex that several UN staff had to be called in. At the end of the night he is to be seen sitting on the bottom of the steps outside the venue, barfing like a professional. "Has he lost his lunch?" I ask one of his pals. "Oh, he lost that a long time ago."

A Fat Dog Sound get themselves onstage with commendable speed, then stay up there for about thirty six hours. They have a new, improved drummer and I still think their bassist is great. They are moving into a pretty strange place at the moment. Their opening number has shades of the Velvet Underground's "Ocean".

Fat Dog are followed by Good Cop Bad Cop, with MC Bot at the controls. Strangely, things appear to have taken a turn for the loud. I actually manage to spend all the Good Cop set outside the building, but this in no impedes my capacity for hearing and enjoying the music to the full. Ears must be bleeding in there.

As the next band gears up to go onstage we take ourselves back stage to put the drums and stuff together. As we pass across the stage, Russ spots the pianist having A Right Artistic. Whatever is eating him soon gets sorted, for the band are up and playing...a James Brown number! "Bloody hell, Steve - we've got to follow Tom Jones!" Sadly, that's about as much fun as we have with them. Well, apart from being stimulated to re-open that well-loved Crap Sax Players Of The Eighties debate.

And then the desperate minutes as we step out onto the stage to see if there is anybody out there to help us get plugged up. On asking one bloke for the sound man, I'm told "There isn't one." Well, at least we've got that cleared up, then. Eventually the man from Bristol appears. He hasn't much of a clue what is going on, keeps saying he's on holiday, thinks he's in a place called "Blythe". Somehow he helps us get plugged up while at the front of the stage Fred Ryan has his eyebrows waxed off for charity. £138:00 the pair, since you ask.

Once Fred has been sufficiently tortured, we turn on the DAT and hope for the best. The backing track comes crashing back at us at about 60 billion decibels and we're off. Starting with Police Chief, it's a high energy set and soon there is action on the dance floor. We steam through a short and furious set, stopping only now and again when Stevie G - for reasons that he is still unable to clarify - insists on stopping the backing track. Not during the tunes themselves, you understand. He's not that gone, Jackson. Stevie Ward is at the controls now, doing a grand job. We deliver phatness and shouting in extra-large portions, blow up Dark Agenda and leave. As we go, two people shake my hand: one, a gnarly old rock dude in his forties, proper rock handshakes and everything; the other, a 17-year old Welsh chick in high street chic who thinks "That was bloody excellent, that!" Wilson - Bridging the Generation Gap. With shouting.

P-Hex come to deliver the coup de grace to an audience fast falling to the effects of hard liquor and evil dub. The Rev. Lindsay does not disappoint and the funk machine rolls out, with the added firepower of Andy Fruish's trumpet combining with Ben's saxophones. Now that, boys and girls, is a horn section. At some stage MC Bot wanders onto the stage, apparently squeezing a version of Sumosonic's "Business and work" into the P-Hex repertoire. An encore is demanded and a strange jam ensues, a cool sort of major/minor thing, where I am surprised to hear Lindsay singing the oddly romantic line "Such a smile!" Your correspondent has since been set straight. The lyric is, of course: "Such a slag!"

By the time that P-Hex are done with them, the punters are looking profoundly damaged. The lad from Brown Thunder is not alone. People are heaving and a-weaving. Outside the front doors, people are lying helpless in the road.

The night has raised well over a thousand pounds for the Romanian hospice project. We retire to the tranquility of Edan House for a late night Budvar and a smoke. Mission accomplished. Photographic evidence to follow.