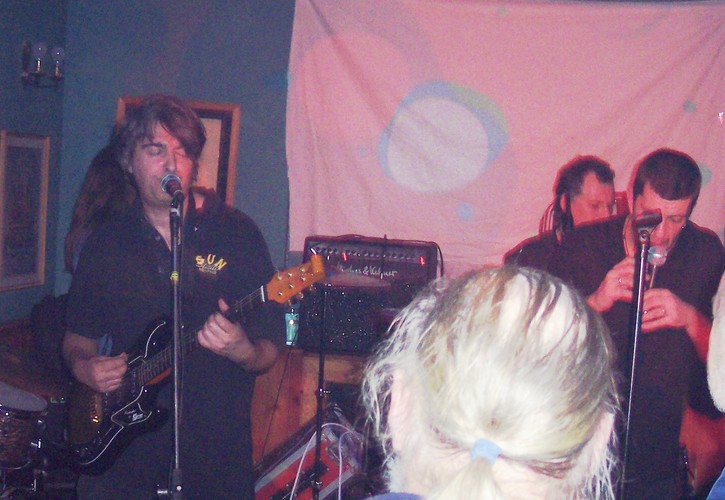 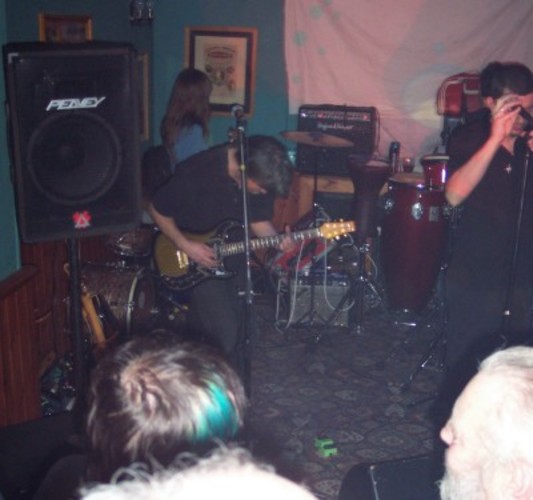 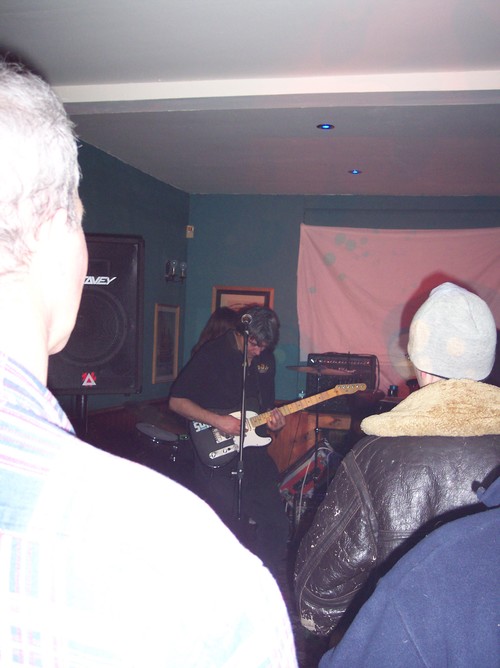 Mike Mooney and Jon Mattock from Lupine Howl have another band, called Applecraft. Having just put out their debut album , "The Happiest Man Alive" (Ochre Records - OCHO43LCD), they are going out to play a few dates. Wilson will be opening.

FREE to get in. Let's hear it for the Labour Club.

The first "consummate professional" moment of our day comes at about four o'clock this afternoon, when Mike Mooney rings to say that the hire company which had promised them a van had shut up shop before they even got there! We make arrangements for Applecraft to use our backline kit and decide that, if they are going to be late, we might as well soundcheck first. This we duly do, and we are just finishing up when the Bristol massive arrives.

I'm talking to Adrian Utley about Northampton, explaining that I live just around the corner from the club, near Colwyn Road. He says that he used to live on Colwyn road, in one of those big old houses that back onto the Racecourse. "Oh yes," I say, "They're nice houses, those." He looks at me as though I have taken final leave of my senses. Of course, he knew Colwyn Road years ago, before the property developers and kids with sports cars moved in, back when it was the P.I. capital of Northamptonshire. I feel forced to tell him that we shan't be much older before the first pavement cafe appears on Colwyn Road.

By the time that The Craft have acquainted themselves with our kit and come to terms with the "Little Room - Big PA" interface, the room is already filling with punters. Somebody says to me "I thought you were going to play first." Max Eider (for it is he), MC Bot and I take off for a quick veggie burger and a smoke round at Shakespeare Villas.

We return to find the room chock full of people, with a faintly agitated DJ Andy keen for us to get on and get started. With unnerving speed we do exactly that. We have the Agent back tonight, and any swing that was missing in Bristol is back with a vengeance. We start with Quality People and Critters. The sound is good and strong and we're playing well. I am, I must confess, having one of my Loud Nights. The audience are really warm and responsive (what else can they honestly do with us crammed in their faces like this?) and we race through the best set of the three, finishing with Dark Agenda. The set has been a success. Andy Skank does something that nobody has ever done before. He calls our sound "sexy"!

Upstairs in the Keir Hardie Room, which has been temporarily re-assigned the Dressing Room, I meet Olga. Olga comes from the Czech Republic and would appear to be some kind of music journalist. She has bravely travelled up from London on her own to see Applecraft, and now she wants to know what I do in the band. I have to explain that she has just missed the chance to see what it is I do.

Olga is concerned about the security of her bag. I assure her that it will be fine up here, out of the way. "Put it under a coat or something, if you want, love." "Yes...that is what I did in Sheffield and they stole my bag there." I try to explain that people in Sheffield are dangerous desperados and that NN1 is altogether more chilled, but she is having none of it. She removes a cassette tape, on which she has recorded an interview with the Undertones, and puts it in her pocket. Then she scoops up a box of Applecraft records and heads downstairs into the throng, bent on sales. I pack up and rejoin Max and Kathie in the hot and crowded bar just as The Craft are kicking off. This time I get to see pretty much the whole of their set, and very fine it is too, a quantum leap from the previous two (just like us, I suppose). The core of Jonny, Adrian and Mooney is raging. Having had trouble making himself heard at the soundcheck, Mooney employs the Turn-It-Up-To-Eleven approach and sprays the bar with wild psychedelic lead guitar. Jonny goes mental. This in turn inspires Mooney to do something even more ludicrous. And so it goes on for forty-five minutes until they drive the truck into the wall on a little thing called "Quo Country"! Mooney is standing on an amp, grinning like a maniac and playing the bass for reasons known only to him. Adrian Utley is attacking his guitar in a profoundly un-Portishead sort of a way. The sound is phenomenal, as loud as the building can stand, and the players are making it only too clear how and why they acquired that ludicrous pedigree. It's a bravura display of lush, muscular psychedelic rock and roll, which leaves everybody in the house soaking wet and grinning like a fool.

Most of the Craft are heading back to Bristol. Jonny is coming to the Wilson party at Misery's place just up the road. So, it turns out, is Olga, for it is late now and Misery has offered her a room for the night. The trouble lies in actually getting Olga from the Labour Club to Misery's yard. "Go with Pat," Mooney urges her, "He'll see you all right." Olga looks at Mooney. She looks at me. Then she looks at Mooney again. Her brow is troubled. "I don't which one is scarier - you or him," she says.

Eventually, with a lot of help from Kathie McGinty, we convince Olga that she is not about to be sold into the white slave trade, and she and her bag finally follow us back to a splendid party, where her diffidence vanishes upon contact with Misery's record collection. As Brian said when I saw him a day or so later: "That was a good old night. I don't remember how I got home."

We still don't know for sure whether MC Bot ever gave them back their Chrysler.