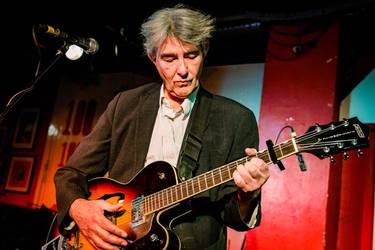 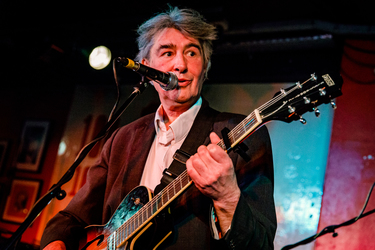 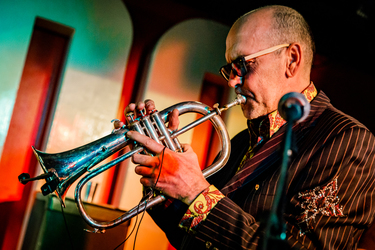 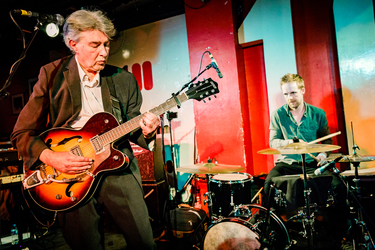 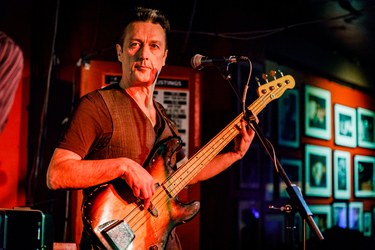 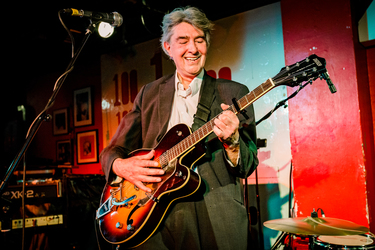 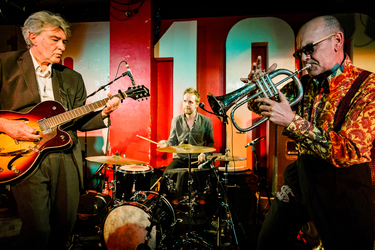 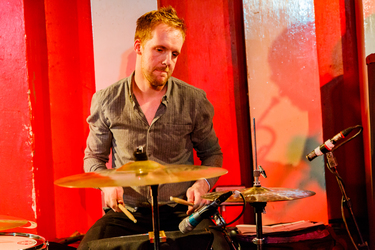 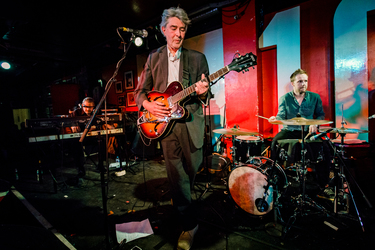 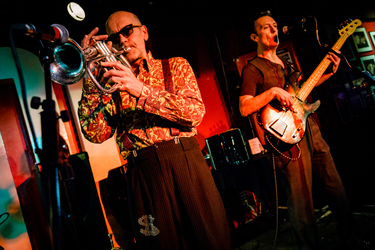 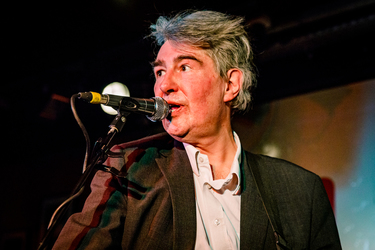 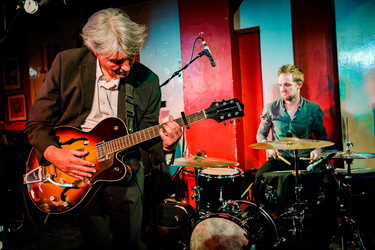 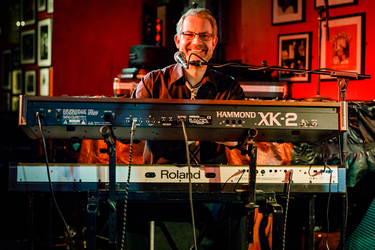 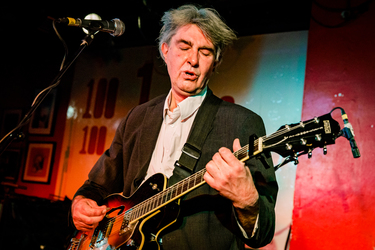 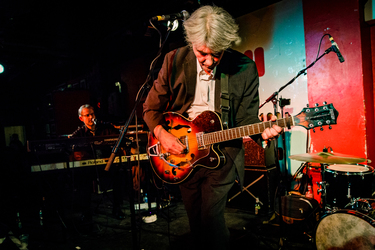 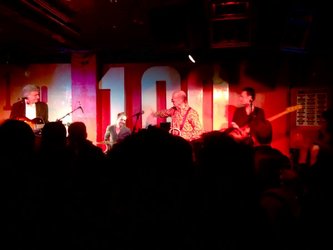 Jazz Butcher pouring it on at the hundred
Credit: @NNNPackdrill 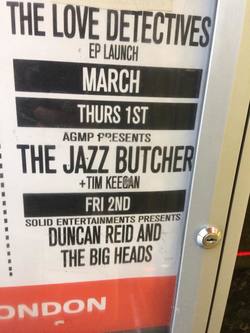 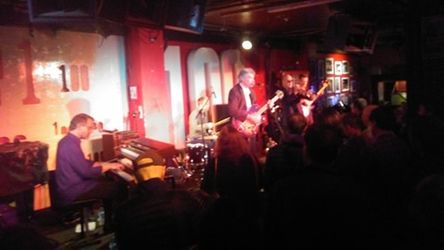 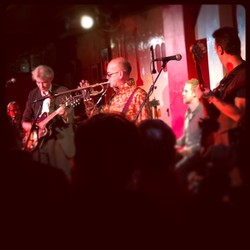 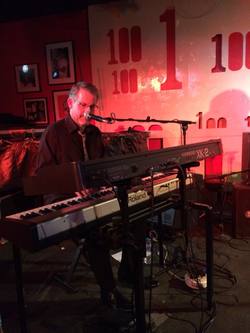 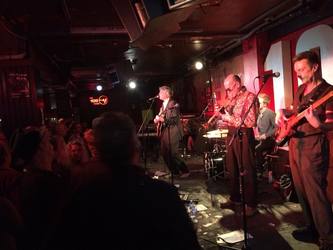 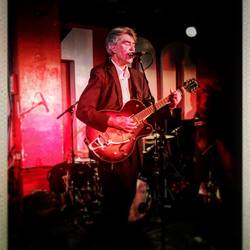 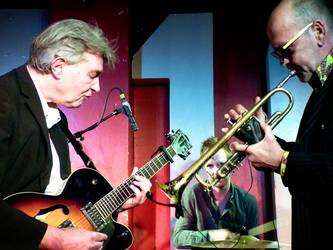 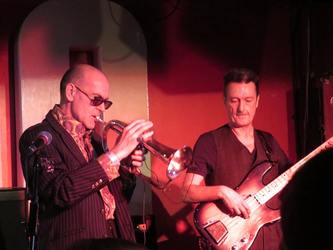 The Jazz Butcher are releasing a 4CD box set 'The Wasted Years' compiling their first four albums - ‘Bath Of Bacon’, ‘A Scandal In Bohemia’, ‘Sex And Travel’ and ‘Distressed Gentlefolk’ - which originally came out on Glass Records between 1983-1986.

Formed in 1982 by songwriter/vocalist Pat Fish, The Jazz Butcher released their debut single "Southern Mark Smith" in 1983 followed by a frantic version of Jonathan Richman's "Roadrunner" the following year. The Glass Records catalogue is being re-released by Fire Records to co-incide with this concert. In 1988 the band signed to Alan McGee's Creation Records releasing an album a year with them until 1995.

Tonight is a rare chance to catch this English Cult Phenomenon in concert.

Here's the dope on last night.

Punters who came anyway: a lot. really a lot.

The Jazz Butcher has made some of the most incisive indie pop of the last three-and-a-half decades, but despite a strong cult following and critical acclaim, the band has remained criminally underappreciated by the wider world. From the release of the band’s first album Bath of Bacon on Glass Records in 1983 up to their crowd-funded and self-released most recent album Last of the Gentleman Adventurers from 2012 (reissued by Fire Records in 2016), frontman Pat Fish (the Jazz Butcher himself) has led various incarnations of the group through a consistent (if somewhat sporadic in recent times) catalog of music to rival that any band out there. But much of the band’s music has been out of print for years, the victim of labels going out of business or being bought up, and of general bad luck. Fire Records has undertaken a project to right these wrongs, releasing a series of box sets collecting the band’s work. The first of these, The Wasted Years, came out last fall and collects the band’s four Glass Records-era albums. The second, The Violent Years, came out on Friday and collects the band’s first four albums (out of six total) for Creation Records. In honor of these releases, the current line-up held a performance last week at the storied 100 Club in the heart of London.

What might have been somewhat surprising, for a show meant to celebrate the reissue of such a storied back catalog, was how much of the night (a full half of the set) concentrated on the latest album, Last of the Gentleman Adventurers. After an introductory variant on the “Jazz Butcher Theme” from In Bath of Bacon, Fish and his band went directly to four songs from that record, “Animals,” “Tombé dans les pommes,” the title track, and “Black Raoul.” The record appeared two more times later in the set, with “Shakey” and “Solar Core.” Possibly an indication that Fish is more interested in the present than in dwelling too much in the past, but the songs are still very much classic Jazz Butcher material. Certainly no one in the audience seemed to mind.

But Fish and his current band (which has not yet appeared on any recordings) did make several nods back to the “classic” Butcher, with “Living In a Village” from 1988’s Fishcotheque, “Mr. Odd” from 1990’s Cult of the Basement, and “Shirley Maclaine” from 1991’s Condition Blue representing The Violent Years set, and “Party Time” from In Bath of Bacon. The arrangements of the songs were updated to fit with the latest line-up (particularly the impressive trumpet and flugelhorn playing of Simon Taylor, which added a unique tone to the music) but were still instantly recognizable.

The biggest surprise of the night for many was the inclusion of a new song, “Melanie Hargreaves’ Father’s Jaguar.” The band has been performing the track the track for a couple of years now, but it has yet to appear in recorded form. “You can’t buy this one anywhere. I guess that means it’s time for a new album,” teased Fish, to a roar of approval from the audience. Hopefully with the renewed interest that the box sets are generating, it won’t be too long until that becomes a reality.

The band closed out the evening with an encore of “Southern Mark Smith” from 1984’s A scandal in Bohemia. The enthusiasm of the audience even seemed to take Fish and the band by surprise, so they added one more song that wasn’t on the setlist, a cover of The Modern Lovers’ “Roadrunner” (which the Jazz Butcher released as a single in 1984). “That’s all the songs we know!” Fish said, promising that the band would be back soon. True to his word, another set at the 100 Club, opening for The Bevis Frond, has already been announced for the end of May.

Singer-songwriter Tim Keegan opened the show, performing songs from his most recent album The Long Game, self-released in 2015. A long-time cohort of performers including Robyn Hitchcock and The Blue Aeroplanes, Keegan had made a mark in the early-to-mid 2000s with his band Departure Lounge, but disappeared from the scene for several years. He says that he’s ready to stage a return, with a “proper” release of The Long Game followed by new material coming soon.