Oooh, I ask you
Oooh, it could be anybody...

I knew as soon as I got there, I shouldn't have gone
The hallway was spooky, with no lights on
There was a squeaking of bats, and a rattle of chains
And nobody would stay there if they had any brains
But I was told it was a party, and I have no shame
Though I shouldn't be there, just the same
There was a ring of a bell, like a bell from hell
A wolf in the corner and a horrible smell
A coffin in the building kept banging around
Yeah and an evil stench and an eviler sound
I saw a man with red eyes, like he drank too much
And a couple of girls you wouldn't ever want to touch
There's stuff on the wall like what the devil wrote
There's a load of evil mothers yelling "go for the throat"

Buy These Records
Southern Mark Smith
Recorded in the summer of 1983 in a place called Wellingborough, a small town in the middle of England where even the children are scarey!

Hamburg
We were all disappointed at the way this came out. The concert was great, but logistics prevented us from making anything much more than a glorified bootleg. Still, live albums are best as souvenirs anyway, so I guess some people regard it fondly. Lots of entertaining photos to look at anyway... 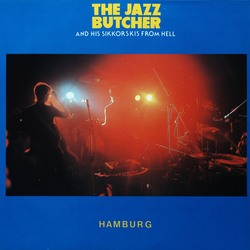 The Butcher Says..
Southern Mark Smith and Jazz Butcher -v- Count Dracula were recorded in the summer of 1983 in a place called Wellingborough, a small town in the middle of England where even the children are scarey! "Hey, mister, can you SEE in them glasses?" I get to sing and play things like guitar, sax and piano. Max does the electric guitar. On bass is Rolo McGinty, and Princess Alice Thompson plays the organ. They're both in the The Woodentops now, a group internationally recognised as being the shortest collection of pop musicians in the world. Playing the drums is Kevin Haskins, a charming neighbour of mine, and veteran of the Bauhaus conspiracy. Miaowula!
Source: The Gift Of Music liner notes