Buy These Records
Condition Blue
For all the pain and crap from which this record was made, the actual sessions were a gigantic and wonderful party. This was warmly received by The Outside World, less popular among those who counted themselves JBC afficionados. This IS the sound of me having fun, and getting me to do that in those dark days of mid-1991 was no small job. 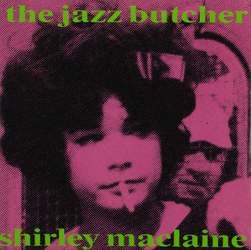 Shock
Unconditional
One of the better Creation-era compilations. Canadian release.

CD
¡Excellent! The Violent Years
Millions of years ago, dinosaurs ruled the Earth. Today the Galileo Space Probe orbits mighty planet Jupiter. The Jazz Butcher Conspiracy first appeared in June 1982 in the back room of the Black Lion in Northampton. They finally drank the bar dry in a small town in in Mallorca on the 20th August 1996

The Butcher Says..
Not, obviously enough, about the dear lady herself, more about a miserable rainy night in Camden and the extraordinary things that some people read these days. Remember, when somebody writes a "self-help" book that's exactly what they are doing: helping themselves. Flipper says "hi", by the way.
Source: Unconditional liner notes