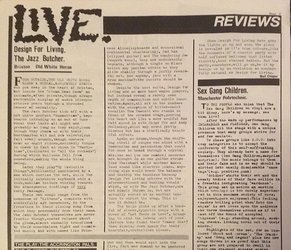 From outside, The Old White Horse seems a normal, adequately spacious pub deep in the heart of Brixton, but inside the "Steam Heat Room" an intimate, often private, though always worthwhile display of audio idiosyncrities peers through a shrouded veneer of normalality.

The Jazz Butcher kick off with a not quite perfect "Summertime", keyboards intruding on an out of tune vocal that last all night and probably as long as they exist. Soon though they charm us with their Northampton wit and sub velvets (sub felt even) sounds, though nowhere near as angst ridden, decidedly tongue in cheek in fact as shown in "Partytime", (dedicated to "all the rockers") during which balloons fell from somewhere, making the whole thing swing.

Later they play "My Favourite Things", brilliantly punctuated by a sax which carries the set, while the initially intrusive keyboard adds a thin, sublime texture veering towards the atmospheric doodlings of very eary Passage.

Their own songs range from the nonsense of "Kittens", complete with wonderfully apt harmonies, to the frenetics to their closing song from which they presumably draw their name.

The Jazz Butcher themselves are never frantic though, seated relaxed about the gloom, almost casually transfixed by their nonetheless tight and committed music; And with names like Princess Alice (keyboards and occasional continental chanteuring), Mad Max (clipped guitar), they are undoubtedly hepcats, although a single on Glass belies and puritan ethics as they glide shakily through a justly rewarding set. And anyway, jazz with a drum machine? - the purists should be shaken.