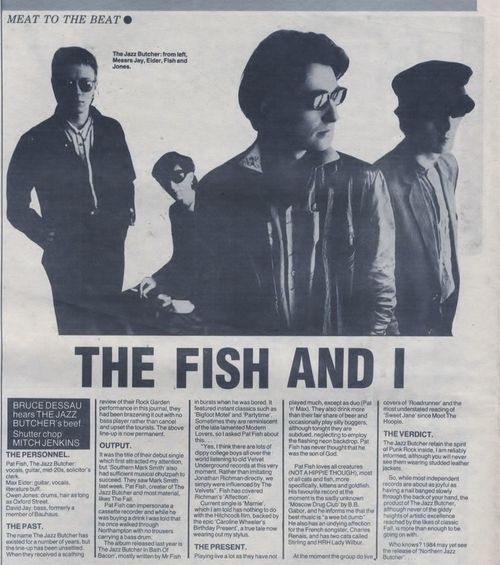 THE FISH AND I

THE PAST.
The name The Jazz Butcher has existed for a number of years, but the line-up has been unsettled. When they received a scathing review of their Rock Garden performance in this journal, they had been brazening it out with no bass player rather than cancel and upset the tourists. The above line-up is now permanent.

OUTPUT.
It was the tale of their debut single which first attracted my attention. but ' Southern Mark Smith ' also had sufficient musical chutzpah to succeed. They saw Mark Smith last week. Pat Fish, creator of The Jazz Butcher and most material, likes The Fall.

Pat Fish can impersonate a cassette recorder and while he was buying a drink I was told that he once walked through Northampton with no trousers carrying a bass drum. The album released last year is Bath Of Bacon, mostly written by Mr Fish in bursts when he was bored. It featured instant classics such as ' Bigfoot Motel ' and ' Partytime '. Sometimes they are reminiscent of the late lamented Modern Lovers. so I asked Pat Fish about this...

Yes, I think there are lots of dippy college boys all over the world listening to old Velvet Underground records at this very moment. Rather than imitating Jonathan Richman directly, we simply were influenced by The Velvets.

Current single is 'Mamie', which I am told has nothing to do with the Hitchcock film. backed by the epic ' Caroline Wheeler's Birthday Present ', a true tale now wearing out my stylus.

THE PRESENT.
Playing live a lot as they have not played much, except as duo (Pat 'n' Max). They also drink more than their fair share of beer and occasionally play silly buggers, although tonight they are subdued, neglecting to employ the flashing neon backdrop. Pat Fish has never thought that he was the son of God.

Pat Fish loves all creatures (NOT A HIPPIE THOUGH), most of all cats and fish, more specifically, kittens and goldfish. His favourite record at the moment is the sadly unknown Moscow Drug Club' by B.B Gabor. and he informs me that the best music is "a wee bit dumb". He also has an undying affection for the French songster, Charles Renais, and has two cats called Stirling and HRH Lady Wilbur.

At the moment the group do live covers of 'Roadrunner' and the most understated reading of 'Sweet Jane' since Moot The Hoople.

THE VERDICT.
The Jazz Butcher retain the spirit of Punk Rock inside, I am reliably informed, although you will never see them wearing studded leather jackets.

So, while most independent records are about as joyful as having a nail banged slowly through the back of your hand. the product of The Jazz Butcher although never of the giddy heights of artistic excellence reached by the likes of classic Fall, is more than enough to be going on with.

Who knows? 1984 may yet see the release of 'Northern Jazz Butcher'.