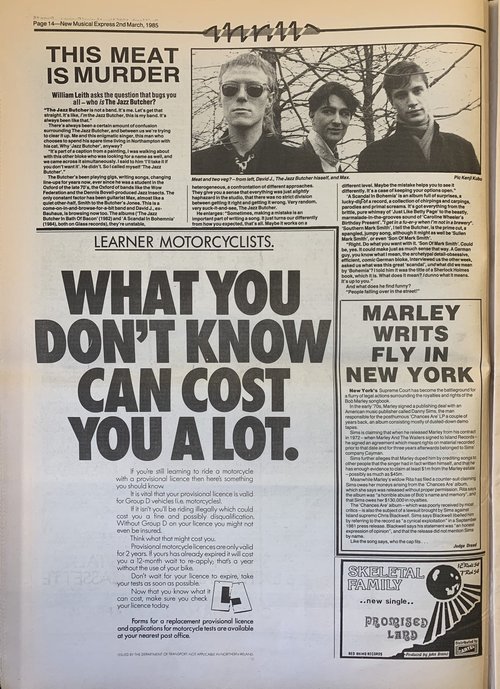 THIS MEAT IS MURDER

William Leith asks the question that bugs you all —who is The Jazz Butcher?

There's always been a certain amount of confusion surrounding The Jazz Butcher, and between us we're trying to clear it up. Me and this enigmatic singer, this man who chooses to spend his spare time living in Northampton with his cat. Why 'Jazz Butcher', anyway?

"It's part of a caption from a painting, I was walking about with this other bloke who was looking for a name as well, and we came across it simultaneously. I said to him 'I'll take it if you don't want it'. He didn't. So I called myself 'The Jazz Butcher'."

The Butcher's been playing gigs, writing songs, changing line-ups for years now, ever since he was a student In the Oxford of the late 70's, the Oxford of bands like the Wow Federation and the Dennis Bovell-produced Jazz Insects. The only constant factor has been guitarist Max, almost like a quiet other-half, Smith to the Butcher's Jones. This is a come-on-in-and-browse-for-a-bit band and David J., ex-Bauhaus, is browsing now too. The albums ('The Jazz Butcher In Bath Of Bacon' (1982) and 'A Scandal In Bohemnia' (1984), both on Glass records), they're unstable, heterogeneous, a confrontation of different approaches. They give you a sense that everything was just slightly haphazard in the studio, that there was no strict division between getting it right and getting it wrong. Very random, very suck-it-and-see, The Jazz Butcher.

He enlarges: "Sometimes, making a mistake is an important part of writing a song. It just turns out differently from how you expected, that's all. Maybe it works on a different level. Maybe the mistake helps you to see it differently. It's a case of keeping your options open."

'A Scandal In Bohemia' is an album full of surprises, a lucky-dip of a record, a collection of chirpings and carpings, parodies and primal screams. It's got everything from the brittle, pure whimsy of 'Just Like Betty Page' to the beastly, marmalade-in-the-grooves sound of 'Caroline Wheeler's Birthday Present'. "I get In a fu-er-y when I'm not in a brewery'. 'Southern Mark Smith', I tell the Butcher, is the prime cut, a spangled, lumpy song, although it might as well be 'Sullen Mark Smith', or even 'Son Of Mark Smith'.

"Right. Do what you want with it. 'Son Of Mark Smith'. Could be, yes. It could make just as much sense that way. A German guy, you know what I mean, the archetypal detail-obsessive, efficient, comic German bloke, interviewed us the other week, asked us what was this great 'scandal', and what did we mean by 'Bohemia'? I told him it was the title of a Sherlock Holmes book, which it is. What does it mean? I dunno what it means. Its up to you."

And what does he find funny?

"People falling over In the street!"