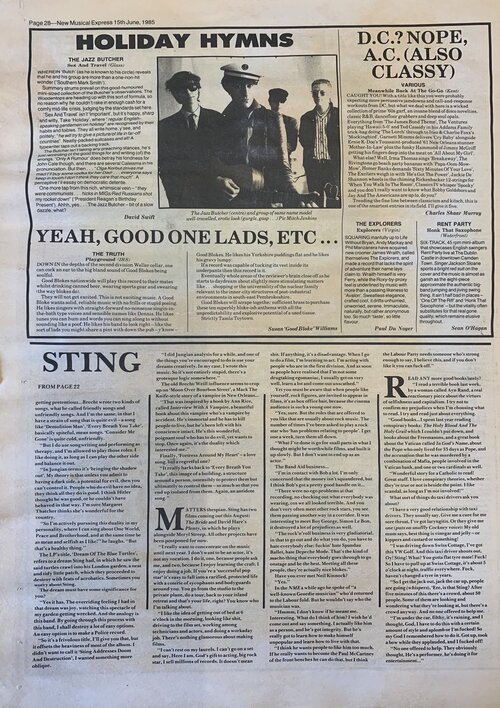 Sex And Travel
Having exhausted the initial stick of JB songs, I was obliged for the first time to write about my life as it was at the time. I think that now we had started to learn about actually creating recordings rather than just recording the sound of a bunch of pals fooling around. This one I'd actually defend at length if I had to.

THE JAZZ BUTCHER And Travel (Glass)

WHEREIN 'Butch' (as he is known to his circle) reveals that he and his group are more than a one-non-hit wonder ('Southern Mark Smith'). Summery strums prevail on this good-humoured mini-sized collection of the Butcher's observations. The Woodentops are heading up with this sort of formula, so no reason why he couldn't rake in enough cash for a comfy mid-life crisis, judging by the standards set here.

'Sex And Travel' isn't 'Important', but it's happy, sharp and witty. Take 'Holiday', where "regular English-speaking gentlemen/on holiday" are recognised by their habits and foibles. They all write home, y'see, and politely: "he will try to give a picture/of life in far-off countries". Neatly-packed suitcases and all! A typewriter taps out a backing track.

The Butcher isn't taking any preaching stances, he's just reminding of the good things for and writing (of) the wrongs. 'Only A Rumor' does detray his fondness for John Cale, though, and there are several Caleisms in his pronunciation. But then... "Olga Korbut drive me mad/I'll buy some vodka for her Dad/... everyone says keep in tough/I don't think they care that much." A perceptive I'll essay on democratic detente.

One more tap from this rich, whimsical vein - "they were communists . . . hicks in MIGs/Red Russians shot my rocket down" ('President Reagan's Birthday Present'). Ahhh, yes . . . The Jazz Butcher — bit of a slow dazzle, what?