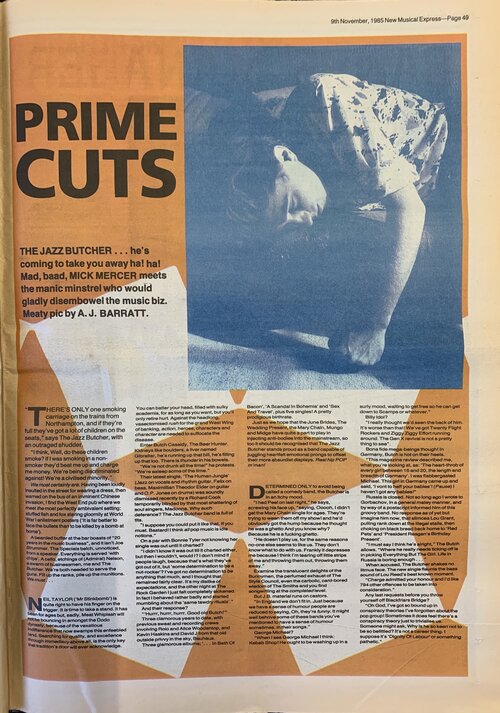 The Human Jungle
The title comes from a rather noir little TV series from the early Sixties wherein the great Herbert Lom played the extremely sexy and not entirely unbrilliant Dr. Alexander Kordu, a psychiatrist with the handy ability to sort out even the most appalling cases within sixty minutes. 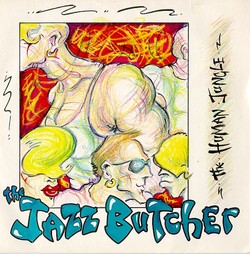 "THERE'S ONLY one smoking carriage on the trains from Northampton, and if they're full they've got a lot of children on the seats," says The Jazz Butcher, with an outraged shudder.

"I think, Well, do these children smoke? If I was smoking in a non-smoker they'd beat me up and charge me money. We're being discriminated against! We're a civilised minority."
We most certainly are. Having been loudly insulted in the street for wearing a dress, then warned on the bus of an imminent Chinese invasion, I find the West End pub where we meet the most perfectly ambivalent setting: stuffed fish and fox staring gloomily at World War I enlistment posters ('It is far better to face the bullets than to be killed by a bomb at home').


A bearded buffer at the bar boasts of "20 years in the music business", and It Isn't Joe Strummer. The Specials belch, unnoticed, from a speaker. Everything is served 'with chips'. A cello. etchings of (Admiral) Nelson, a swarm of businessmen. me and The Butcher. We're both needed to serve the guns. Fill up the ranks. pile up the munitions. We must ..


NEIL TAYLOR ('Mr Stinkbomb') is quite right to have his finger on the trigger. It is time to take a stand. It has been for ages but, sadly, Meat Whiplash will not be bouncing in amongst the Dodo dynasty, because of the vexatious indifference that now swamps this enfeebled land. Searching for quality, and excellence through immediacy above all, is the only key that tradition's door will ever acknowledge.
You can batter your head. filled with sulky academia, for as long as you want. but you'll only retire hurt. Against the headlong, vasectomised rush for the grand West Wing of banking. action, heroes, characters and character are needed to suffocate the disease.
Enter Butch Cassidy, The Beer Hunter. Kidneys like boulders, a liver named Gibraltar. he's running up that bill, he's filling up that loo. There is thunder in his bowels.
"We're not drunk all the time!" he protests. "Were asleep some of the time."
Their latest single, 'The Human Jungle' (Jazz on vocals and rhythm guitar, Felix on bass, Maximilllan Theodor Eider on guitar and O.P. Jones on drums) was soundly dismissed recently by a Richard Cook temporarily blinded by that most shattering of Soul singers, Madonna. Why such deference? The Jazz Butcher band is full of tits.
"I suppose you could put it like that. If you must. Bastard! I think all pop music is idle notions."

On a par with Bonnie Tyler not knowing her single was out until It charted? "I didn't know it was out till it charted either, but then I wouldn't, would I? I don't mind if people laugh. because that's what they've got out of it, but 'some determination to be a nut-rocker'? I've got no determination to be anything that much. and I thought that remained fairly clear. it's my dislike of expectations, and the other night at The Rock Garden I just felt completely sickened. In fact I behaved rather badly and started mumbling about the 'same tawdry rituals'"
And their response?
"Hurrr, hurry, hurry. Good old Butch!"
Three clamorous years to date, with previous sweat and recording crews involving Role and Alice Woodentop, and Kevin Haskins and David J from that old outside privvy in the sky, Bauhaus.
Three glamorous albums: '. . In Bath Of Bacon', 'A Scandal In Bohemia' and 'Sex And Travel, plus five singles! A pretty prodigious birthrate.


Just as wo hope that the June Brides. The Wedding Present. the Mary Chain, Mungo and Midge have quite a part to play in injecting anti-bodies into the mainstream, so too it should be recognised that The Jazz Butcher stands proud as a band capable of juggling heartfelt emotional prongs to offset their more absurdist displays. Real hip POP m'man!


DETERMINED ONLY to avoid being called a comedy band, the Butcher is in an itchy mood.
"I had Peel on last night," he says. screwing his face up, "saying, Ooooh, I didn't get the Mary Chain single for ages. They're trying to wean them off my showl and he'd obviously got the hump because he thought he was a ghetto. And you know why? Because he is a tucking ghetto."

"He doesn't play us, for the same reasons no-one else seems to like us. They don't know what to do with us. Frankly it depresses me because I think I'm tearing off little strips of me and throwing them out. throwing them away."
Examine the translucent delights of the Bunnymon, the perfumed exhaust of The Style Council, even the carbolic, card-bored wisdom of The Smiths and you find songwriting at the completed level.
But J.B. material runs on castors.
"In England we don't fit in. Just because we have a sense of humour people are reduced to saying. Oh. they're funny. It might well behove some of these bands you've mentioned to have a sense of humour sometimes, In their songs."
George Michael?
"When I see George Michael I think: Kebab Shop! He ought to be washing up in a sully mood, waiting to get free so he can got down to Scamps or whatever."
Billy Idol?
"I really thought we'd seen the back of him. it's worse than that! We've got Twenty Flight Rockers and Ziggy Ziggy Effort running around. The Gen X revival is not a pretty thing to see".
Bona tide mega-beings though! In Germany. Butch is hot on their heels.
"This magazine review described me, what you're looking at, as: 'The heart-throb of every girl between 16 and 20, the length and breadth of Germany'. I was flabbergasted Michael. This girl In Germany came up and said. 'I vont to haff your bables'! (Pause) I haven't got any babies!"

Russia is closed. Not so long ago I wrote to Gorbachov, in a general matey manner, and by way of a postscript informed him of this groovy band. No response as of yet but imagine him now. that sllmcea Lou Grant. pulling rank down at the illegal stalls, then choking on black bread back home to 'Red Pets' and 'President Reagan's Birthday Present'.

"I must say I think he's alright," The Butch allows. "Where he really needs ticking off is in picking Everything But The Girl. Life In Russia is boring enough ... "
When accused. Tho Butcher shakes no litmus face. The new single flaunts the bass sound of Lou Reed's best known moment.
"Charge admitted your honour and I'd like 794 other offences to be taken into consideration."
Any last requests before you throw yourself off Biackfriars Bridge?
"Oh God. I've got so bound up in conspiracy theories I've forgotten about the pop group! Sometimes it does feel there's a conspiracy theory just to trivialise us. Someone might ask. Why is he so keen not to be so belittled? It's not a career thing. I suppose it's 'Dignity Of Labour' or something pathetic."
Visitor Feedback
No comments yet for this page [Add your own]