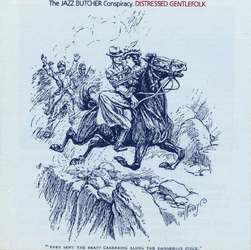 Since 1983 The Jazz Butcher has shown an undeniable skill in distilling the gist out of the most diverse styles, and a great songwriting productivity, as evidenced by the six LPs and ten singles they have released in the last four years. We are also getting used to being surprised by Butch, as he jumps in different directions on each of his albums, although always with the same drive. The two twelve-inches released in 1986, "Hard" and "Conspiracy", were very different, and "Distressed Gentle-folk" once again goes on a different tangent. The common denominator is Butch's warm voice, which makes even the least inspired songs stand out.

"Distressed Gentlefolk” is The Jazz Butcher's most laid-back album. Three impeccable ballads contribute to this: "The New World" (where Butch sounds like a crooner from the 1950s), "Angels," and above all, "Still In The Kitchen". A certain country air that pervades the entire album, as well as the jazz swing that permeates "Domestic Animal” or “Buffalo Shame”. Doo-wop and a nostalgic touch also make an appearance on "Who Loves You". But Jazz Butcher is not the only one who betrays clear influences: "Nothing Special", a simple pop song that totally belies its title, is one of the many examples of where the roots of the Woodentops can be found. (Or perhaps the other way around? Both singers have known each other for years...) The truth is that Butch is a great songwriter who doesn't appear to show any fatigue, but rather a capacity for reinvention that makes his recycling task completely justified. Without surpassing the brilliant "Sex & Travel", "Distressed Gentlefolk" is also an outstanding album, in which Butch gives greater prominence to his sidekick Max Eider, who is in charge of the composition in "The New World" and "Who Loves You? In England there is a limited edition of the album, with a second 45 r.p.m. freebie LP that includes the tracks of the maxis "Hard" and "Conspiracy", a new version of "Grooving In The Bus Lane" and a couple of unreleased tracks

Credit: Romà Ferre
Visitor Feedback
No comments yet for this page [Add your own]