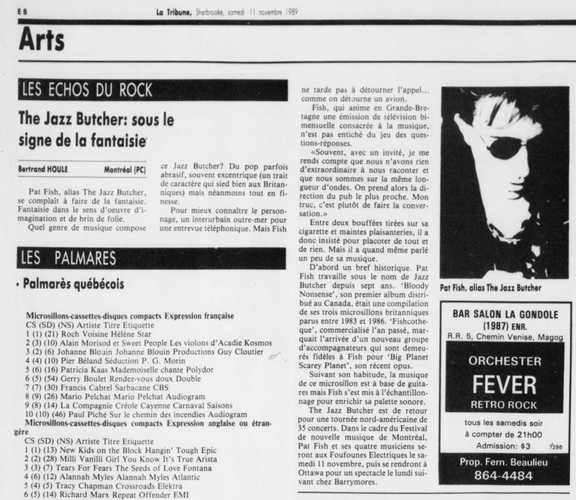 CAUTION - This is a robotic translation of the original Québécois publication

Pat Fish, aka The Jazz Butcher delights in fantasy. Fantasy in the sense of a work of imagination and a touch of madness. What kind of music compose that Jazz Butcher? Pop sometimes abrasive, often eccentric (a trait character that suits the British well) but nevertheless with finesse.

To get to know the character better, an overseas long distance a telephone interview. But Fish don't delay in diverting the call... as one diverts an oath.

Fish, who hosts a program in Great Britain fortnightly television devoted to music, is not infatuated with the game of questions and answers

“Often, with a guest, I realize that we have nothing extraordinary to tell us and that we are on the same wavelength. We then take the direction of the nearest pub. My thing is more to make conversation.”

Between two puffs drawn on his cigarette and many jokes, he so insisted on chatting about everything and You're welcome. But he still spoke some of his music

First a brief history. Pat Fish works under the name Jazz Butcher for seven years. ‘Bloody Nonsense', his first album distributed in Canada, was a compilation of his three British LPs published between 1983 and 1986. ‘Fishcotheque’, marketed last year, marked the arrival of a new group of companions who have remained res loyal to Fish for ‘Big Planet Scarey Planet”, his recent opus.

As usual, the music of this LP is based on guitars but Fish has taken up sampling to enrich his sound palette.

The Jazz Butcher is back for a North American tour of 35 gigs. As part of the Festival new music from Montreal, Pat Fish and his four musicians will be at Les Foufounes Electriques on Saturday November 11, then will go to Ottawa for a show the following Monday at Barrymores
Visitor Feedback
No comments yet for this page [Add your own]