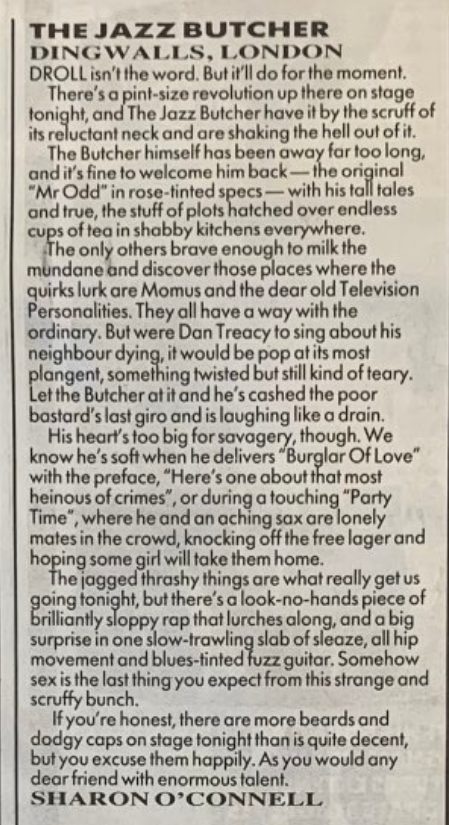 DROLL isn't the word. But it'll do for the moment.

There's a pint-size revolution up there on stage tonight, andThe Jazz Butcher have it by the scruff of its reluctant neckand are shaking the hell out of it.

The Butcher himself hos been away for too long, and it's fineto welcome him bock — the original 'Mr Odd' in rose.tinted specs - with his tall tales and true, the stuff of plots hatched overendless cups of tea in shabby kitchens everywhere.

The only others brave enough to milk the mundane and discover those places where the quirks lurk are Momus and the dear old Television Personalities. They all have a way with the ordinary. But were Dan Treocy to sing about his neighbour dying, it would be pop at its most plangent, something twisted but still kind of teary. Let the Butcher at it and he's cashed the poor bastard's last giro and is laughing like a drain.

His heart's too big for savogery, though. We know he's softwhen he delivers Burglar Of Love" with the preface,"Here's one about that most heinous of crimes, or during atouching 'Party Time, where he and an aching sax are lonelymates in the crowd, knocking off the free lager and hopingsome girl will take them home.

The jagged throshy things are what really get us going tonight, but there's a look-no-hands piece of brilliantly sloppy rap that lurches along, and a big surprise in one slow-trawling slab of sleaze, all hip movement and blues-tinted fuzz guitar. Somehow sex is the last thing you expect from this strange and scruffy bunch.

If you're honest, there are more beards and dodgy cops onstage tonight than is quite decent, but you excuse themhappily. As you would any dear friend with enormous talent.

Credit: Paul Blinkhorn
Visitor Feedback
No comments yet for this page [Add your own]