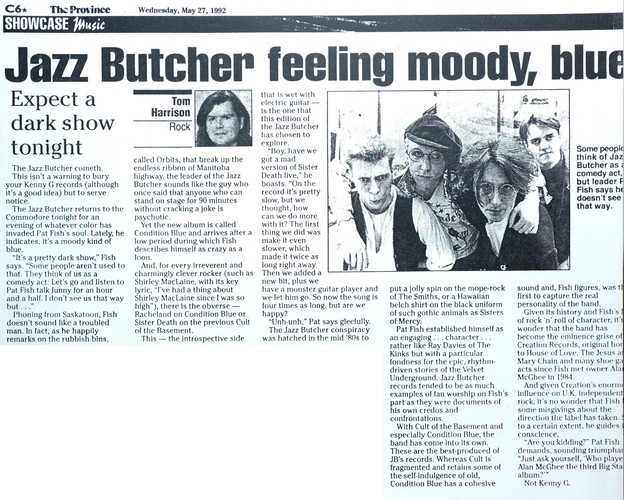 This isn't a warning to bury your Kenny G records (although it's a good idea) but to serve notice.

The Jazz Butcher returns to the Commodore tonight for an evening of whatever color has invaded Path Fish's soul. Lately, he indicates, it's a moody kind of blue.

"It's a pretty dark show," Fish says. "Some people aren't used to that. They think of us as a comedy act: Let's go and listen to Pat Fish talk funny for an hour and a half. I don't see us that way but..."
Phoning from Saskatoon, Fish doesn't sound like a troubled man. In fact, as he happily remarks on the rubbish bins, called Orbits, that break up the endless ribbons of Manitoba highway, the leader of the Jazz Butcher sounds like the guy who once said that anyone who can stand on stage for 90 minutes without cracking a joke is psychotic.

Yet the new album is called Condition Blue and arrives after a low period which Fish describes himself as crazy as a loon.

This - the introspective side that is wet with electric guitar - is the one that this edition of the Jazz Butcher has chosen to explore.

"Boy, have we got a mad version of Sister Death live," he boasts. "On the records it's pretty slow, but we thought, how can we do more with it? The first thing we did was make it even slower, which made it twice as long right away. Then we added a new bit, plus we have a monster guitar player and we let him go. So now the song is four times as long, but are we happy?

The Jazz Butcher conspiracy was hatched in the mid '80s to put a jolly spin on the mope-rock of The Smiths, or a Hawaiian belch shirt on the black uniform of such gothic animals as Sisters of Mercy.

Pat Fish established himself as an engaging... character... rather like Ray Davies of the Kinks but with a particular fondness for the epic, rhythm-driven stories of the Velvet Underground. Jazz Butcher records tended to be as much examples of fan worship on Fish's part as they were documents of his own credos and confrontations.

Given its history and Fish's love of rock'n'roll, it's no wonder that the band has become the eminence grise of Creation Records, original home to House Of Love, The Jesus And Mary Chain and many shoe-gazing acts since Fish met owner Alan McGee in 1984.

And given Creation Records's enormous influence on U.K. independent rock, it's no wonder that Fish has some misgivings about the direction the label has taken. So to a certain extent, he guides its conscience.