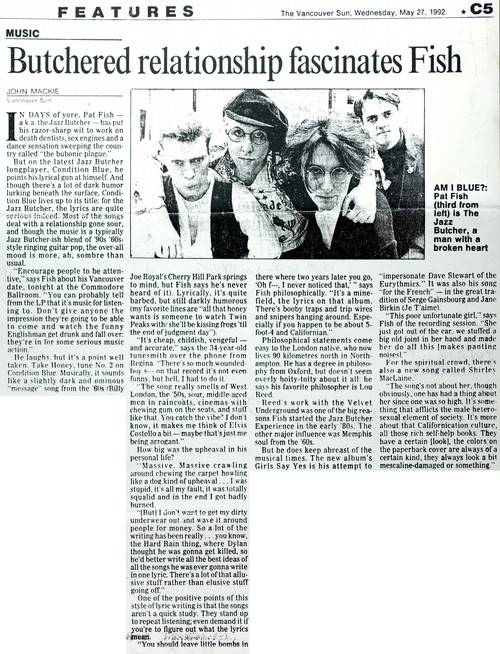 IN DAYS of yore, Pat Fish a.k.a. the Jazz Butcher — has put his razor-sharp wit to work on death dentists, sex engines and a dance sensation sweeping the country called "the bubonic plague." But on the latest Jazz Butcher longplayer, Condition Blue, he points his lyrical gun at himself.

And though there's a lot of dark humor lurking beneath the surface, Condition Blue lives up to its title: for the Jazz Butcher, the lyrics are quite serious indeed. Most of the songs deal with a relationship gone sour, and though the music is a typically Jazz Butcher-ish blend of '90s '60s-style ringing guitar pop, the over-all mood is more, ah, sombre than usual.

"Encourage people to be attentive," says Fish about his Vancouver date, tonight at the Commodore Ballroom. "You can probably tell from the LP that it's music for listening to. Don't give anyone the impression they're going to be able to come and watch the funny Englishman get drunk and fall over: they're in for some serious music action."

He laughs, but it's a point well taken. Take Honey , tune No. 2 on Condition Blue. Musically, it sounds like a slightly dark and ominous "message" song from the '60s (Billy Joe Royal's Cherry Hill Park springs to mind, but Fish says he's never heard of it). Lyrically, it's quite barbed, but still darkly humorous (my favorite lines are "all that honey wants is someone to watch Twin Peaks with/ she'll be kissing frogs 'til the end of judgment day").

"It's cheap, childish, vengeful — and accurate," says the 34-year-old tunesmith over the phone from Regina. "There's so much wounded-boy s--- on that record it's not even funny, but hell, I had to do it."

"The song really smells of West London, the '50s, sour, middle-aged men in raincoats, cinemas with chewing gum on the seats, and stuff like that. You catch the vibe? I don't know, it makes me think of Elvis Costello a bit -- maybe that's just me being arrogant."

How big was the upheaval in his personal life? "Massive. Massive crawling around chewing the carpet howling like a dog kind of upheaval ... I was stupid, it's all my fault, it was totally squalid and in the end I got badly burned. "[But] I don't want to get my dirty underwear out and wave it around people for money. So a lot of the writing has been really ... you know, the Hard Rain thing, where Dylan thought he was gonna get killed, so he'd better write all the best ideas of all the songs he was ever gonna write in one lyric. There's a lot of that allusive stuff rather than elusive stuff going off."

One of the positive points of this style of lyric writing is that the songs aren't a quick study. They stand up to repeat listening; even demand it if you're to figure out what the lyrics mean.

"You should leave little bombs in there where two years later you go, 'Oh f---, I never noticed that,' " says Fish philosophically. "It's a minefield, the lyrics on that album. There's booby traps and trip wires and snipers hanging around. Especially if you happen to be about 5-foot-4 and Californian."

Philosophical statements come easy to the London native. who now lives 90 kilometres north in Northampton. He has a degree in philosophy from Oxford, but doesn't seem overly hoity-toity about it all: he says his favorite philosopher is Lou Reed.

Reed's work with the Velvet Underground was one of the big reasons Fish started the Jazz Butcher Experience in the early '80s. The other major influence wass Memphis soul from the '60s.

But he does keep abreast of the musical times. The new album's Girls Say Yes is his attempt to "impersonate Dave Stewart of the Eurythmics." It was also his song "for the French" — in the great tradition of Serge Gainsbourg and Jane Birkin (Je T'aime).

"This poor unfortunate girl," says Fish of the recording session. "She just got out of the car. we stuffed a big old joint in her hand and made her do all this [makes panting noises]."

"The song's not about her, though obviously, one has had a thing about her since one was so high. It's some thing that afflicts the male heterosexual element of society. It's more about that Californication culture, all those rich self-help books. They have a certain [look], the colors: on the paperback cover are always of a certain kind, they always look a bit mescaline-damaged or something."