The Jazz Butcher
The Butcher Writes

THE STAR OF INDIA

On the corner of Kettering road and Abington Avenue, just across from the Racecourse Pavilion, in one of the loveliest corners of the town, stands the Star Of India, one of Northampton's oldest and finest Indian restaurants.

I have been visiting this fine establishment ever since I arrived in Northampton in the summer of 1982 and it has inevitably played a major part in JBC history. There was a time when I was seriously thinking about to trying to run a club night there. In an Indian Restaurant! It was never going to happen, but the view out of the window on a summer evening as you pull on your beer and wait for your dinner is something to behold and it's time that you knew about the place.

The restaurant is the business of the family Islam, who are actually from Bangladesh. Despite their Muslim name, the Islam family are only too happy to serve you a foaming beaker of the good stuff, and when I first entered their restaurant I was delighted to see that they served the magnificent Dortmunder Kronen on draught. Decent German beer was as rare as rocking horse shit in Northampton back then, so I warmed to the place immediately.

The Star also benefits from some strange wrinkle in the infamous British licensing laws, whereby they are able to continue pouring the foaming beakers for you up until the hour of 1:00 am.

At this time the restaurant was small, perhaps eight tables, with a fairly traditional UK curry house flock wallpaper and mirrors arrangement. Later this was replaced by magnificent life-size paintings of tigers on the walls and little oriental verandah type roofs over each table. At one point in the nineties a patriotic fervour took hold and the walls were adorned with colourful murals of Sylhet back in Bangladesh. It was never claustrophobic like those joints in New York City with the stupid fairy lights and the rude shouty men. It was more like being in a nest - a tiger's nest - with beer.

Max, Owen and I dined at The Star on New Year's Day 1983 along with our pal KB Mensah. I can remember somebody having a copy of "Private Eye". On the cover was a photo of Yasser Arafat, the Palestinian leader, who was going through all manner of indignities at the time. As they do, the guys at The Eye had dropped in little speech bubbles. A reporter was asking Arafat "Why don't you throw in the towel?" "I can't" he replied, "I need it to wrap around my head."

Whatever, it was at that lunch that we all agreed to go piling off to see John Cale playing solo at the Venue in January 1983, a concert so massively inspirational that it fired us up for our entire musical "career".

As I came to frequent the Star regularly in the eighties (yes, that is where your money went), it came to my attention that the young guys who worked there would gather on quiet nights and play tapes of Indian pop on the restaurant stereo "a band!" No, really, how good is that? One of the young guys was a man of charming serenity and apparently endless patience called Bodrul Islam. His catch phrase? "Yes, sir. Of course, sir."

Dining with Kathie one evening in the mid-nineties, I became very intrigued and excited about a bit of music that was playing in the restaurant. It had that sort of post-modern global thing going on, but with a definite subcontinental flavour. It crossed my mind that maybe this was the latest work of the band guys. Could it be possible? Even it turned out not to be them, I was still sufficiently interested as to want to know who had made this stuff. I flagged down Bodrul as he cruised elegantly through his domain and asked him what the music was. "I believe it is Enigma, Mister Fish."

Today Bodrul runs the whole restaurant in his uniquely unflappable way and I never even think about talking music with him. For he knows I am giant fool. When the band was in Northampton we would dine regularly at the Star. It was while we were entertaining Alan McGee there after the video shoot for "Spooky (EP)" in 1988 that I managed to take this top snap of Paul Mulreany and Laurence O'Keefe rioting at the table. 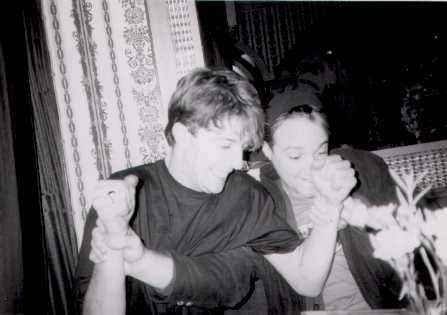 In 1991 a traumatic thing came to pass. During the recording of "Condition Blue" there was a Norwich-based misunderstanding involving Alex Lee and my cash machine card, which resulted in my getting stuck at the studio with no money to get home on. I milled about the studio like a big dim ghost for a few days after the record was finished, and then Sue the studio maintenance lady gave me a lift back over to Northampton.

On my return to NN1 I hit the bank, tooled up with wedge and headed for The Star. I was greeted on arrival by Bodrul, and I gazed out at the cherry blossom in the evening light with joy in my heart as I asked him for an enormous glass of his most excellent Dortmunder. In his dealings with The Punter Bodrul never errs on the side of flippancy, but on this occasion his demeanour was one of unusual solemnity. For the Dortmunder was gone. And so, dear readers, my fragile equilibrium shattered, in the Star Of India I sat down and wept.

Still, The Star and I survived and I learned to make the transition to Indian Kingfisher beer in the end. But another shock was in store for me in 1994. As I left the lovely park-side apartment of my good friend Bob, I saw that the front of The Star had been entirely obscured by builder's crap. The windows were boarded up. I was mortified. What was to become of NN1 without this most essential of dining rooms? A few weeks later, a shadow of my former self by now, I read in the local paper that The Star was about to re-open after a major refit. In utter delight I called the familiar number and made a booking for the night of the Grand Re-opening.

The refit was a doozy. The restaurant was much bigger and decked out in pale blues and white, with lots of plants and engraved glass panels, classy as hell. And there were elephants. Great white elephants standing two feet tall guarded the tables, as solemn and auspicious as Bodrul himself, elephants with tusks of gold. There was a new menu, champagne on the house and a visit from the Mayor. What a night!

Since then The Star has truly thrived as one of Northampton's finest Indian restaurants, and I have tried to do my bit to keep it so.

It is so popular these days that it can be hard for the waiters to keep up with things, and on one deeply embarrassing occasion I had to take Bodrul aside and remind him that I had Americans getting hungry here. But one screw-up in 20 years isn't bad going really.

Recently in Northampton's newest and most ostentatiously up-market Indian restaurant (recommended by The Great Depak Patel, who usually knows all) I was reduced to rioting within the hour after the waiters completely forgot to bring us any food at all.

The other day I saw in our local paper that an expatriate Northamptonian in Peru had asked his parents to bring him a curry from The Star when they came for a visit. 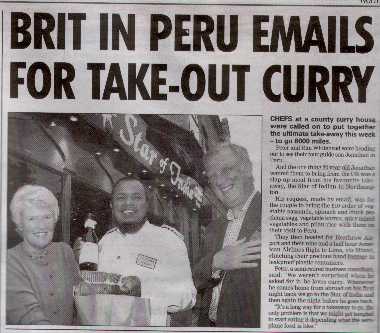 This, dear readers, is what The Star is about. I am going there now.