The Jazz Butcher
The Butcher Writes 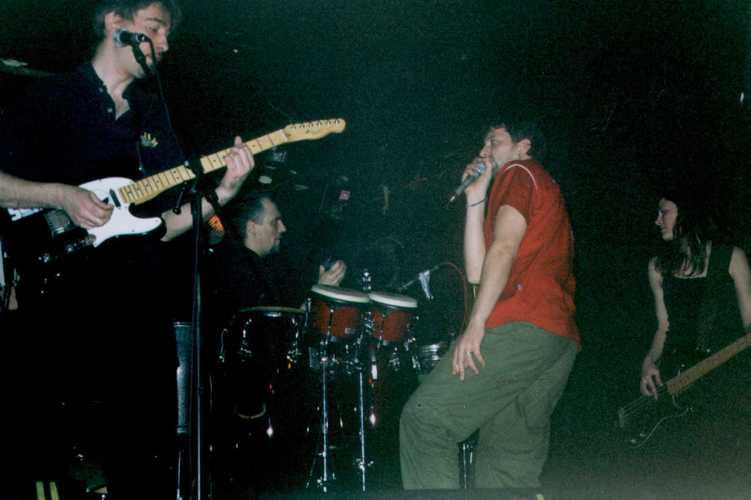 (Wilson at the Boatrace in Cambridge, 31Jan2002)
I started the Wilson project fondly imagining that it would be a solo thing.

I figured that I could use my computer to make backing tracks for me to play along with, and thus get around the stunted expectations and inexorable tedium which normally attend the appearance of a man in his forties sitting on a stool with a guitar in his lap.

Largely taking the Great Wolfgang Tschegg my example, I thought that I might be able to present my songs in an interesting fashion, one which might afford me the opportunity to sit back and really play, rather than just holding down the basic tune with endless rhythm guitar strumming. I committed myself to doing a gig (in order to have a deadline) and set to cooking up some groovy backing tracks.

A month or so later I had the bones of a set. I had built nice easy tunes, which would afford me a bit of space to stretch out and do something, and I had begun to figure out a few nice ideas for songs.

Somewhere around this point, my pal Russell Cooper , who played percussion for Sumosonic and on Rotten Soul, decided that he would help out at the gig. I agonized for a while before I decided that in that case we might as well get a bassist too. One night I was in a bar, looking for Aggi, who played the bass for Sumosonic. He seemed like a pretty obvious choice. I never did find Aggi, but I did run into Russ, who was with our friend Kathy Schaer a.k.a. Special K, one time Sumo vocalist. Rather to my astonishment it was announced to me that Kath was to be our bass player.

I had seen Kath hold her own on bass alongside Jonny Mattock and Mark Refoy , so I knew that she was good enough for the job. The three of us decided to style ourselves a "low power trio", and it was as such that we rehearsed and performed our first show at The Soundhaus in Northampton on 1st March 2001. Along the way we tried to work up a sort of ascetic dub sound, with grungey loops, phat bass and sparse, loud guitar, largely tuned to a single chord for maximum drone simplicity.

There were definite advantages in being in band where all the members lived within five minutes walk of each others front doors. Everyone had an income and two of the three of us had cars. Logistically it was already the best group I had ever been in. After the Soundhaus gig we played at The Racehorse in Northampton and then went on the road to play in Leeds for Team Borscht. Each time we played we enjoyed ourselves more and people were responding well.

As we entered May 2001 events came to pass which caused me to suspect that perhaps people were responding a little too well. My good friend Ian Botterill, the singer from Sumo and Fat Controller, came asking to join the band, bringing with him another guitarist, Steve Gordon, from the gargantuan Northampton funk collective P-Hex. Bearing in mind that I had just found out how much fun it can be to be the only guitarist in a band, I was a touch uncertain as to how all this would work out. Matters were further complicated within the week. Sitting in my back yard one day, Curtis E. Johnson asked me: "Can anyone be in your band? Can I be in your band?" "Of course you can be in my band, Curt," I replied, "Just as long as you play the Theremin!"

I figured that this was just the sort of reply the facetious old bastard was expecting.

It certainly was not what I was expecting when Curtis turned up a few days later with something that, while not technically a Theremin, was nonetheless quite clearly a Theremin! The "Air-FX" is a device made for DJs. By moving one's hand over a series of invisible beams emanating from the Air-FX one can manipulate a whole rake of mad synthesised sounds, and even start to affect the final mix, dropping filters and all manner of other tricks. In our pal's music shop they are advertised thus: "QUICK! BUY ONE OF THESE! THEY'RE MENTAL!"

I had to admit it. In the course of one week our band had doubled in size.

Our first date as a sextet came at the end of May. We found ourselves headlining a four band bill at The Racehorse. Immediately before us came Capdown (short for "Capitalist Downfall", fact fans!), a profoundly talented and effective ska/punk band with a new album and a slot at Reading Festival. It looked as though it would be a fairly pointless exercise trying to follow something like that, but we went ahead with it and it all went off very well. Capdown certainly seemed to enjoy it. So one after-show party later there we were, a fully functioning six-piece. And I had to admit that Steve's guitar really did bring something to the sound. As readers of this will probably know, I've been lucky enough to have worked with some really fine guitarists over the years, so I'm not being idle when I say that Steve is one of the most intuitive and sensitive players I have worked with. He is not flash or fancy, but he always seems to know exactly what will work in a situation.

Wilson was quiet over the Summer while I travelled with the JBC, but we picked up again in September. We played another show in Leeds, picking up a nice bit of press in the northern edition of The Big Issue. We did a series of shows at The Racehorse in Northampton, drawing larger audiences each time we played out. Given that almost everyone in the band has another band, it took quite a while for people to realise exactly what was going on. By the time that we played our Christmas Eve show it seemed that we had established ourselves an identity locally.

The autumn also saw Ian, Curtis and me getting seriously into the business of writing and assembling our music in our own studio. Over a few months we developed a massive library of sounds and samples and worked it into some half a dozen new tunes. In January Ian moved his computer equipment into the studio, which now operates like a small factory, with three men working six hours a day most every day. I can honestly say that I have not worked in a more exciting and creative environment.

Up until this night I was very happy with the band's music, but I was concerned that maybe we were a bit disorganised and unimpressive vocally. This was the night that the singing and shouting caught up with the playing. Curtis, Ian and I travelled the 50-odd miles to the gig in a car together, screaming our heads off and singing like lunatics the whole way. There is no doubt in my mind that this had something to do with our performance that evening. Wilson entered 2002... more confident and intimidating than ever before.

Wilson's next shows will be at The Racehorse, Northampton on Good Friday 29th March and The Packhorse, Leeds on Saturday 30th March. Support on both dates is the excellent Saab 77.