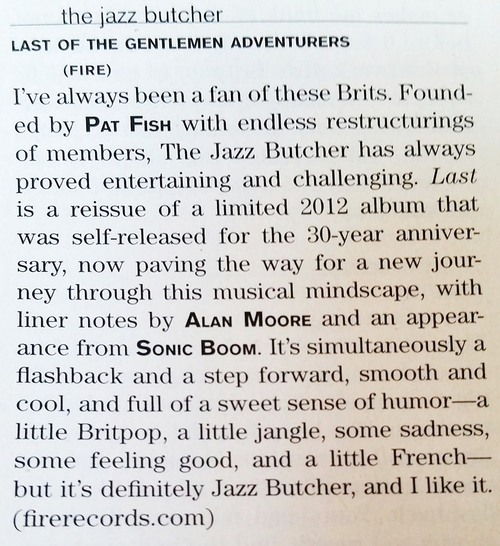 LAST OF THE GENTLEMEN ADVENTURERS (FIRE)

I've always been a fan of these Brits. Founded by Pat Fish With endless restructurings of members, The Jazz Butcher has always proved entertaining and challenging. Last of the Gentleman Adventurers is a reissue of a limited 2012 album that was self-released for the 30-year anniver-sary, now paving the way for a new journey through this musical mindscape, with liner notes by ALAN MOORE and an appearance from SONIC Boom. It's simultaneously a flashback and a step forward, smooth and cool, and full of a sweet sense of humor - a little Britpop, a little jangle, some sadness, some feeling good, and a little French - but it's definitely Jazz Butcher, and I like it.