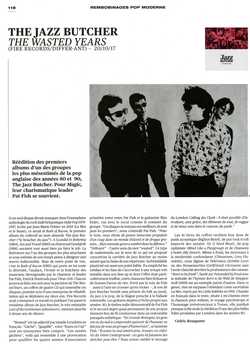 Fire Records 4xCD
Reissue of the first albums of one of the most underestimated groups of 80's and 90's English pop, The Jazz Butcher. For Magic, their charismatic leader Pat Fish remembers.

If a single record was missing in the anthology anthology of Indie Pop 1979- 1997, written by Jean-Marie Pottier in 2015 (The Word and the Rest), it would be In Bath of Bacon, the first album of the collective at absurd name The Jazz But-dear ("the butcher of jazz"). In Scandai in Bohemia (1984), Sex and Travel (1985) and Distressed Gentlefolk (1986) could have done just as well. The literature on one of the most endearing and underrated groups of his time struggles to designate an indisputable work. But from our point of view, it is In Bath of Bacon (1983) that carries in it all the diversity, the daring, the irony and the freshness of the shameless musicians by the singer and leader Pat Fish, Patrick Huntrods for the 'civil status.

Everyone will be able to make their opinion with the release of The Wasted Years, a box of four CDs that brings together these records, the first act of a rehabili-tation company that will unfold over two years. Fire Records began this work by publishing last year the thirteenth album of Jazz Butcher, the highly regarded Last of the Gentleman Adventurers, ending twelve years of silence.

"Wasted" is an adjective not easy to translate into French. "Spoiled", "wasted", even "screwed up" are his well-understood synonyms. "The ruined years", that sounds like a provocation to qualify the four years of association primitive between Pat Fish and guitarist Max Eider, seen in hindsight as the top of the band.

"These records are not our best, they are just the first," says Pat Fish. "For the rest, we were innocent young people suddenly thrown into a world of alcohol and drug free ... Of course we sank in the trap."
"Defeated": the other meaning of the word "wasted". This type of misunderstanding of the meaning of what is proposed characterizes Jazz Butcher's career at least as much as the class of his repertoire. His tremendous plasticity is also his weak point. He prevented the media and fans from clinging to a very unstable gang in his line-up and whose offer was particularly bushy, between damn songs and good bars of laughter. Carried by Fish's voice - as comfortable as a crooner and a rocker - the sound of Jazz Butcher leaps without notice from folk to punk, from jazz to pop, from joke to solemn ballad. The guitars doped with the echo of the 80s, Pat Fish's male-demonstrative timbre and the almost permanent second degree of its purpose serve as a unifying thread in a formidable aesthetic pataquès.
"In Britain, people have struggled to understand that having a good sense of humor does not make you a comedy band," laments Fish. "Listen to the American soul, listen to these Velvet Underground games: these people were doing sketches, perhaps, we had pondered the message from the London Calling Clash: it was possible to gracefully introduce elements of soul, reggae and old sounds into the punk storyline. "
The 41 titles of the box contain their dose of acoustic punk (Bigfoot Motel), pure rock n'roll imported from the 50s (I Need Meat), pop optimistic (Mind Like a Playgroup) and songs to drink (My Desert) . Even when it's cold, the pieces with the confusing modernity (Chinatown, Gray Flanelette), the ones worthy of Television (Zombie Love) or the Housemartins (Girlfriend) crash without having looked for it behind the prominence of the valves. "Born to be fried!" , shouted on Poisonded by Food with the melody of Steppen-wolf's Born to Be Wild anthem (1968) is just one example.

In this genre, nothing surpasses the haunting surrealist tale La Mer, taken up by the Little Rabbits in 1991. Sung in French in the text, located halfway between the children's song, the psychotropic journey and the irreverent homage to Trenet, she almost alone justified the reissue of one of the most beautiful follies produced by London in the 80s.