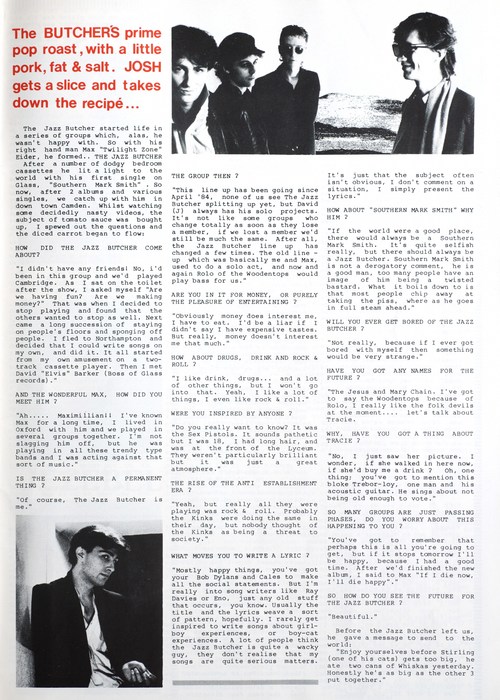 The BUTCHER'S prime pop roast, with a little pork, fat and salt. JOSH gets a slice and takes down the recipe...

the jazz butcher started life in a series of groups which, alas, he wasn't happy with. so, with his right hand man Max Eider , he formed... THE JAZZ BUTCHER. after a number of dodgy bedroom cassettes he lit a light to the world with his first single on glass, Southern Mark Smith . so now, after 2 albums and various singles, we catch up with him in downtown camden. whilst watching some decidedly nasty videos, the subject of tomato sauce was bought up, i spewed out the questions and the diced carrot began to flow:

HOW DID THE JAZZ BUTCHER COME ABOUT?
"i didn't have any friends! no, i'd been in this group and we'd played cambridge. as i sat on the toilet after the show, i asked myself, 'are we having fun? are we making money?' that was when i decided to stop playing and found that the others wanted to stop as well. next came a long succession of staying on people's floors and sponging off people. i fled to northampton and decided that i could write songs on my own, and did it. it all started from my own amusement on a two-track cassette player. then i met david "elvis" barker (boss of glass records)."
AND THE WONDERFUL MAX, HOW DID YOU MEET HIM?
"ah..... maximillian!! i've known max for a long time, i lived in oxford with him and we played in several groups together. i'm not signing him off, but he was playing in all these trendy type bands and i was acting against that sort of music."
IS THE JAZZ BUTCHER A PERMANENT THING?
"of course. the jazz butcher is me."
THE GROUP THEN?
this line up has been going since april '84, none of us see the jazz butcher splitting up yet, but David J. always has his solo projects. it's not like some groups who change totally as soon as they lose a member, if we lost a member we'd still be much the same. after all, the jazz butcher line up has changed a few times. the old line - up which was basically me and Max Eider , used to do a solo act, and now and again rolo of the The Woodentops would play bass for us."
ARE YOU IN IT FOR MONEY, OR PURELY THE PLEASURE OF ENTERTAINING?
"obviously money does interest me, i have to eat. i'd be a liar if i didn't say i have expensive tastes. but really, money doesn't interest me that much."
HOW ABOUT DRUGS, DRINK AND ROCK & ROLL?
"i like drink, drugs... and a lot of other things, but i won't go into that. yeah, i like a lot of things, i even like rock & roll."
WERE YOU INSPIRED BY ANYONE?
"do you really want to know? it was the Sex Pistols. it sounds pathetic but i was 18, i had long hair, and was at the front of the lyceum. they weren't particularly brilliant but it was just a great atmosphere."
THE RISE OF THE ANTI ESTABLISHMENT ERA?
"yeah, but really all they were playing was rock & roll. probably the Kinks were doing the same in their day, but nobody thought of the kinks as being a threat to society."
WHAT MOVES YOU TO WRITE A LYRIC?
"mostly happy things, you've got your Bob Dylans and John Cales to make all the social statements. but i'm really into song writers like ray davies or Brian Eno, just any old stuff that occurs, you know. usually the title and the lyrics weave a sort of pattern, hopefully. i rarely get inspired to write songs about girl-boy experiences, or boy-cat experiences. a lot of people think the jazz butcher is quite a wacky guy, they don't realize that my songs are quite serious matters. it's just that the subject often isn't obvious, i don't comment on the situation, i just present the situation."
HOW ABOUT SOUTHERN MARK SMITH WHY HIM?
"if the world were a good place, there would always be a southern mark smith. it's quite selfish really, but there should always be a jazz butcher. southern mark smith is not a derogatory comment, he is a good man, too many people have an image of him being a twisted bastard. what it boils down to is that most people chip away at taking the piss, where as he just goes in full steam ahead."
WILL YOU EVER GET BORED OF THE JAZZ BUTCHER?
"not really, because if i ever got bored with myself then something would be very strange."
HAVE YOU GOT ANY NAMES FOR THE FUTURE?
"the jesus and mary chain. i've got to say the The Woodentops because of rolo, i really like the folk devils at the moment.... let's talk about tracie."
WHY, HAVE YOU GOT A THING ABOUT TRACIE
"no, i just saw her picture. i wonder, if she walked in here right now, if she'd buy me a drink? oh, one thing; you've got to mention this bloke trebor-loy, one man and his acoustic guitar. he sings about not being old enough to vote."
SO MANY GROUPS ARE JUST PASSING PHASES, DO YOU WORRY ABOUT THIS HAPPENNING TO YOU?
"you've got to remember that perhaps this is all you're going to get, but if it stops tomorrow i'll be happy, because i had a good time. after we'd finished the new album, i said to Max Eider "if i die now, i'll die happy"."
SO HOW DO YOU SEE THE FUTURE FOR THE JAZZ BUTCHER?
"beautiful."
before the jazz butcher left us, he gave us a message to send to the world: "enjoy yourselves before stirling (one of his cats) gets too big, he ate two cans of whiskas yesterday. honestly he's as big as the other 3 put together."
Visitor Feedback
No comments yet for this page [Add your own]