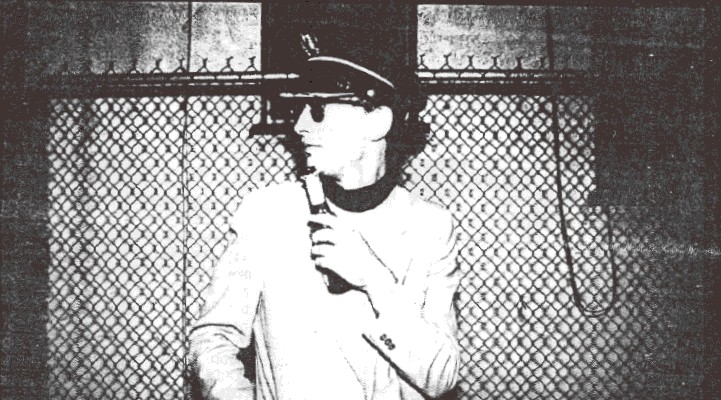 Photography: Greg Allen
Just what is this thing called the Jazz Butcher? For four years now this question has plagued many a listener. Is it one man's twisted solo persona, singing not-quite-your-average songs about goldfish and Bigfoot? Is it actually a band, expanding its attack to include the Sikkorskis from Hell and dead fish in elevators? Or maybe it's truly an evil elaborate plot to overthrow your mind with its first US album& tour onslaught as the Jazz Butcher Conspiracy... Call it a man, a band or an insidious plan, call it neo-folk-jazz-pop-whatever or the best-sounding records to come out of Britain in recent memory, just don't call it late for dinner. We instead called lead singer and guitarist Pat (a/k/a Butch) in L.A. recently at a reasonable hour and found him "functioning" during his first beer of the day, not to mention a most pleasant conversationalist.

In the world according to Pat, the Jazz Butcher is rather a loose aggregation trying to avoid this "Jethro Tull school of pop music posturing" as best it can, sometimes switching names, instruments and band members. Shortly after playing here, bassist Felix Ray left his post in the band as David J. 's successor. Appended names continually change, such as the Jazz Butcher and the Sikkorskis from Hell

"They're Gothic heavy metal helicopters. We were completely twisted, doing one of our Hunter S. Thompson weekends, reading about this Sikkorski helicopter that crashed into the sea and thought of this heavy metal album cover, with teeth and flames -- we kept picturing this helicopter coming out of the mouth of hell..."
the Jazz Butcher and the Kings of the Garage Scum from Hell, and the Jazz Butcher Conspiracy; and while the basic lineup - guitars, bass, drums - remains fairly constant, Pat is known to sub the occasional flute, bass or vocal saxophone bit. All rather befitting a project that evolved as a "chance to go on vacation from day jobs and show all these bastards..." 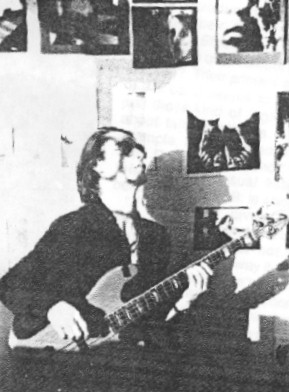 Living in Northampton, England, Pat was a "middle-class college white boy" who began writing in 1982 more as a hobby than anything else, just to see if it could be done. Glass Records released his solo album "Bath Of Bacon", in the UK that year; joined by Max Eider on guitar, a partnership was formed that persists on every subsequent release. David J. (ex-Bauhaus) also began working with them for the next few records before leaving for Love And Rockets. Says Pat:

"He's a good friend of mine, and the other guys in Love And Rockets are good friends of mine too, but I think he's completely wasting his time in that group. It seems to me to be completely about making money... he's capable of doing something worthwhile. I just hate these people who do pop music for money, or for the sake of their ego or to be loved or something - it's pathetic, what's the matter with these people? David's selling himself short by behaving like this kind of nitwits, by being in a group like that. On the other hand, I'm sure he really believes in it; I just think he's misguided." 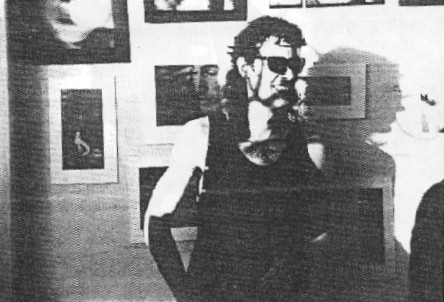 Was there ever any fear that the move to a four-piece band might change the original direction?

"One of my principles is that small is beautiful and stay away from the music business and all this sort of thing, and once you get a group there is a great danger that you're just doing this ghastly rock thing, but I think that Max and I are both very aware of that, that we can avoid it as best we can... There's a chemistry there which enables us to do more as a band."

The Jazz Butcher has yet to find a convenient niche in the UK music "scene": with a sound uniquely its own, the loopy charm and jazz-influenced guitar that distinguishes them from their contemporaries led to initial labeling as a novelty band. Pat agrees:

"That's what happens in the press because we ridicule their precious pop thing and point out that it's only part of capitalism. I think it kind of embarrasses them, and they don't know what to do 'coz we look one way and sound another, and so forth. They've finally realised that we're not going to go away, and we don't just write funny songs either." 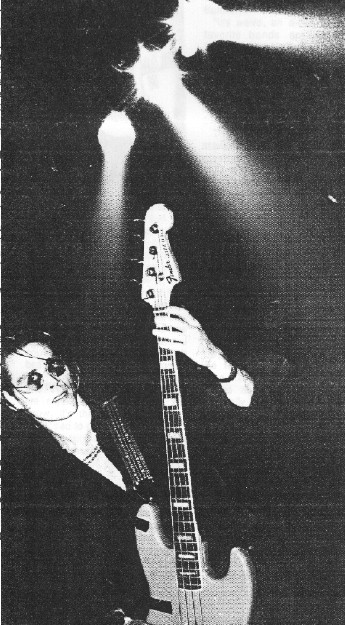 Nor does their current tag as a sort of "Lloyd Cole and the Smiths gone wrong" outfit describe the anomaly:

"I think that's basically because Lloyd Cole and I are the only two people with sensible haircuts in the entire industry. I quite like his music, but to suggest that we're influenced by him is ridiculous. We just have the same record collection, probably. And I quite like the Smiths - I like Morrisey, he's an individual; he can't sing, but he knows it. It's funny about the Smiths: when we began, everybody thought we were all ha-ha-ha, and the Smiths began and they went 'Poor miserable bastards'. But I notice that the Smiths are getting funnier and funnier, and we're getting more and more miserable, so maybe we're like passing each other and waving out the window..."

While one would hardly call the new material "miserable," there is a marked shift from earlier material such as The Jazz Butcher Meets the Prime Minister to some more introspective, brooding songs (the new Angels ), and a heightened political awareness and commentary.

"I don't know that we've actually gotten more serious", concurs Pat, "but I can see the Butcher attitude being applied to more serious subjects, still identified with the way we see it, you know? One can't write songs about talking elephants all the time."

But what of American audiences, newly introduced to the band through their first album in this country (Bloody Nonsense, a compilation of UK album tracks and singles)? Their primary awareness of the band seems to be through just those kind of "lighter" songs about talking animals. Take, for example, LA radio's embracing of The Devil Is My Friend . Doesn't this lead the casual listener to believe that's all J.B. is about?

"If that song gives them 3 minutes of amusement and contentment, it's better than not having 3 minutes... In a way it could be frustrating, but there's no point pretending that's only a minor thing of what we do or dismissing it - it doesn't mean we're writing it to order; we don't think 'Oh God, we've gotta have another funny song now'... A lot of the songs are there to ridicule what pop songs are all about. It's never been tailored to an audience. A lot of these songs that are just stupid, I just love 'em - you know, songs like 'Juanita Banana' by the Peels. Whatever happened to them? I mean, obviously one would get a certain amount of deep emotional satisfaction from hearing Girlfriend or Angels on the radio, but I started off doing this originally thinking that no one was gonna hear it at all. It;s just that as time goes by we discover that there are people out there that do like it. What they like is their business - if they like the stupid songs, I'm delighted to be of use to them." 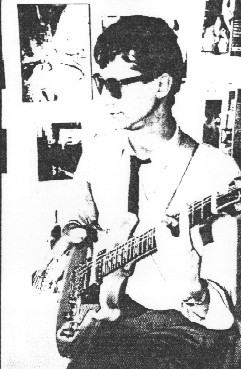 This leaves one wondering about the subject matter of some songs, such as the recurrence of hell and the devil in several of them. While the approach may be novel, some of it comes from personal experience, says Pat. Speaking of The Devil Is My Friend :

"I saw the devil, you know. It was really scary - he was enormous. He was the size of fucking Yorkshire, honestly, he was the size of Kansas. I mean, he was really big. I saw him on my lawn - I couldn't believe it. No, I hadn't been taking drugs, and I fucking saw him. I just knew he'd come for me, and I thought, 'What the fucking hell am I supposed to do?' I was scared; I gave it a couple moments' thought and I addressed him: I said 'Just fuck the fuck off, devil', and he did! It was brilliant, it was the best thing that ever happened. I fucking hate the devil. The Devil Is My Friend is just a piss-take on a stupid remark Roky Erickson (to whom the song is dedicated) made in an interview when he was out of his head, and I just thought it was too ridiculous to let pass and should be held up for public ridicule. I mean, I hate the devil, I don't wanna know him."

Roky's comments notwithstanding, Pat remains a 13th Floor Elevators fan, belying an affinity for many American bands - a few of which to whom the Jazz Butcher has often been likened. Seems rather curious in light of the patently "quiet sort of English operation" that is the Jazz Butcher.

"It's weird, an awful lot of my favourite bands are American: Suicide, the Velvets of course, Talking Heads before they turned into a yuppie group. There's so many good American bands. For me, punk began in New York, no question at all. I mean, Patti Smith - god!"

The Velvet Underground is a constants, and obvious, comparison, given the similarities in guitar style and cover material such as Sweet Jane (Lou Reed) and Waiting For the Man, but Jonathan Richman?

"He's not an influence. I like him, I cover his songs ( Roadrunner (Richman) , Affection), we have things in common, but nothing he's ever done has changed the slightest idea in my mind. But he's brought me a lot of pleasure and I think we have a similar approach to things."

"The The Woodentops go back a long way with us... they certainly have similar attitudes. Their song 'Do It Anyway' just about sums up the idea of their group and mine... (In attitude) we see ourselves as a punk rock group, musically too because we can do whatever we like. The trouble is, the people who call themselves punks now have been doing the same thing for 10 years - they're more traditionalists than the bloody thing that punk came to blow away. Look at the Damned now - look at them! They look and sound like a heavy metal group... Kids who call themselves punks are just as reactionary as most people. But the punk attitude is all-important, especially in these days. We and a few other bands like the Pogues are keeping it alive - the The Woodentops, the Mary Chain, the June Brides... I like rockabilly, I like psychobilly, I like every kind of music except heavy metal or U2. They're just putting their egos and aspirations over on a bunch of paying people, and I think that's stupid." 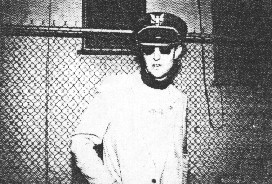 How 'bout any of the bands the Jazz Butcher played with over here?

"Downey Mildew - flaming brilliant! Possibly the best band we've played with. Also, Camper Van Beethoven. We got on them and understood them very well. The tour's gone much better than we expected; we haven't had a bad night at all."
That's certainly evident in the band's recent appearance here, where they played 2 completely different sets in one night to a packed Roxy crowd. The wait was worth it for the supposed "cult" following who'd waited long agonizing months before these shows, and new fans' eager response should encourage them back to these shores soon, possibly in March. (It should also indicate that there are quite a few people who don't mind having their minds overthrown.) Next step in the Conspiracy master plan: Distressed Gentlefolk, the just unleashed album.
Visitor Feedback
No comments yet for this page [Add your own]