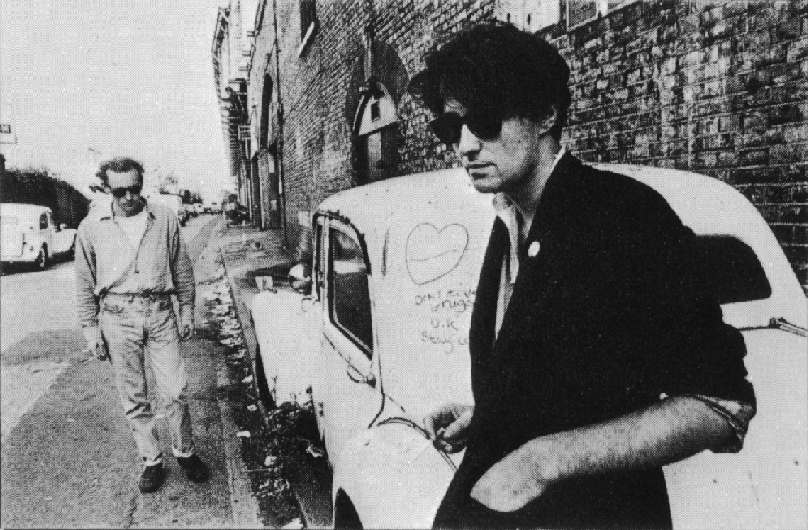 After the solid, sweaty show that he should be famous for, main Jazz Butcher conspirator Pat Fish retreated to the Odd Rock parking lot for some serious interrogation. We began with the story of Pat's association with Creation Records kingpin Alan McGee.
"When the band first became a band," Pat begins, "(and) started to trim its lineup down to some kind of vaguely regular unit, in '84, one of the first places we used to go and play was this little club in London called The Living Room."

"The Living Room was kind of a peripatetic club - it moved about just really sordid little upstairs rooms and little small pubs, and the guy who ran it was this mad little Scots geezer called Alan McGee. And he used to wear these really crap corduroy trousers and big wooley jumpers that his mum had made him, and he used to talk in this impenetrable Scottish accent and none of us ever understood what he was saying."

"And I always knew him but we just sort of got going with Glass and, as Creation Records got more and more better known, I used to think, `The bastards. Bastards. Wish I was on Creation They're all pop stars on Creation.' In '85 we discovered Europe and we used to do a lot more work out there. In '86 we were doing Europe and here, and we didn't neglect England exactly, but England didn't quite pick up with us as much as a lot of places."

"At the end of '86. the old band just toured (themselves) to death within two years' touring, without really any rest at all. And the record company contract was up, and we just decided it was time to go out and get new lives. At which point, Alex, our sax player, who is conspicuous by his absence tonight, (with) family business at home to attend to, (and I) went out on a solo tour - well, duo tour - in Europe, just the two of us, just to see what would happen if we tried to do it."

"We got as far as Paris, McGee flew out, and said, `Eh, uh want teh sign yeh' and I said, `Fuckin' hell, McGee, you know, this has been a long time coming. I thought you'd forgotten who I was.'"

"But he hadn't, and there then followed about three months when we got really mucked about between him and the American record company, Big Time, who were really messing about. In the end, fortunately, we ended up with McGee, because if you look at what's happened to Max's solo album, Big Time have really screwed him up - ahem, ahem - big time, on that. It was ready at the beginning of February, and they put it out in October, and they've gone bust since, and they did no promotion on it."

Jim Warchol looks surprised. Big Time is busted?
"They're down the tubes. There's one man left, and the man who bled them white for his own personal amusement. We all should have known because he only got the money to set up the label and as a result of his involvement with a band called Air Supply, so we should have known he didn't care about us."

"We should have known. He was offering us loads of money. And I can offer you loads of money now; doesn't mean I'll give it to you. Doesn't mean I even have it, you know. So we were lucky, in the end, to end up with McGee. We went through some pretty poverty-stricken times in the meantime."

On Creation Records, the Jazz Butcher reside with several kindred spirits - Edwyn Collins, Nikki Sudden, Primal Scream, and the Weather Prophets, for example. Pat found this new relationship useful when time came to record his first LP for the label:
"McGee said, `Okay, let's make an album.' and I said, `Yeah, yeah, for God's sake. I've got millions of songs; let's go.' And I said, `But the thing is, we don't have a drummer. I can play bass, but we'll have to use a drum machine.' He said, `D'you want teh borrow the Weather Prophets?' And I'd been listening to She Comes from the Rain for about three months. For me, it was one of those records you can't get out of bed without playing. I just said, `You want to lend me the Weather Prophets?' `Aye, it'll cost ye 500 quid.' Five hundred quid, out of an LP, you know?" Pat sounds incredulous.

"So we had them and they were decent geezers. Greenwood, the bass player, tried to chat up my wife the other night, but fortunately fell down drunk in the middle of it, so there wasn't a problem."

With Looking For Lot 49 , on the new LP, the Jazz Butcher have beaten the Blowtorch to the punch with rock & roll's first tribute to the great American author Thomas Pynchon. Pat has a great story about the post horn symbol that pervades the Pynchon novel The Crying of Lot 49.
"When you're touring Europe, it's really scary, because you keep seeing their signs everywhere. I'll tell you what we had a lot of trouble with. We were touring Spain and there was this shop - sold military medals and shit - and there was this one badge, it was red. And, in gold, it had the post horn, just like Lot 49, crossed out with rifles. I thought, `Whoa, this is Lot 49 stuff.'"

"So I bought it and I put it on my lapel. We were driving along, we stopped at a Spanish roadside cafe, and... as I walked in, everybody fell silent and looked at me with a really evil look. I though, `What've we done? I dunno. Did I shave today? I mean, is my fly undone? What's happening?' And we had this Spanish driver who was driving us around and he was getting very agitated. And he spoke to our Spanish road manager, who has a bit of English and he turned around and asid, `Um, that badge you're wearing, Pat.' I said, `Yeah?' `Better take it off, Pat.' `What is it?' `It's the National Guard.'

"Whoopsy-daisy, yeah, right, so that was off. But it's a great design, that. What the Spanish National Guard have got against Thurn & Taxis (the main European mail system from the 14th to the mid-19th centuries - their post horn symbol is of some significance in Lot 49) I can't tell you."

We reminisce about my opening slot wherein the Chesterfield's bass player wandered about onstage, apparently looking for something. Pat seemed to enjoy the Chesterfields, despite a few initial misgivings.
"I mean," he says, "a band that is supporting and turns up at 10:00 to do their soundcheck, you know, I mean, Sweet Jesus. I mean, give `em credit - they did just get up there and happen. To be fair to them... I thought they were going to be a load of wanky pop stars, and at least they were down-to-earth nutters, so that's to their credit, really."
Has anybody asked you what you think of The Best Kisser in the World (former J.Butcher guitarist/vocalist Max Eider 's solo LP)?
"I dunno if they've asked me on tape. I think it's good. I think it's very obvious, from listening to that and my record, why we had to stop and sort of part ways. My favorite song on The Best Kisser... is Raking Up Leaves. It's that line - "Jesus, friend of the poor; Jesus, what do you take me for?"

"The thing about Max's songs is: lyrics are really pokey. It's almost as though his record company ought to put out press releases saying, `This song is about...' and then enjoy it."

I suggest, on the basis of tonight's show, that the Jazz Butcher has rediscovered the Bath Of Bacon LP (recorded 1982).
"Well," Pat reasons, "the reason we're playing a lot off that, really, is that Fishcotheque was made very much the same way, it's like Son of Bath Of Bacon. It's like, y'know, we have a bunch of people who we didn't really know and who'd never heard the songs and it was like, `Right, you've got 20 minutes. Make it happen.' So, in a way, we sort of developed a feeling for those old songs."
I tell Pat that he has a good band.
"It's the best rhythm section, I think, probably, we've ever had. There's no disrespect to the last lot at all."
They pulled off Real Men real well.
"Yeah, they're chunky, aren't they?"
The talk turns to new and obscure groups. Pat mentions Spacemen 3 as the "very, very best, happeningest band, apart from The Blue Aeroplanes and the Jazz Butcher Conspiracy." He plugs a few others:
"Don't forget The Perfect Disaster album, Swar Wars, coming out on Fire Records this summer. If you like the Velvet Underground, there's nothing wrong with it. From Germany there's a band called M Walking On The Water. They've got accordians. They sound like Violent Femmes, Tom Waits, The Woodentops, the JBC. They toured with the JBC. The JBC liked them, they liked the JBC. From Germany, the first group ever. Eeeeeehhhhh!!"

"Is there anything else you want to know, Jim? 'Cos it looks like we're moving out."

About the new record, real quick.
"Our new record? It's like a postcard. A whole bunch of us went into the studio and we hadn't got the faintest idea what we were going to do, and we were there for two weeks, and that came out as a result. And it's like when you go on holiday - it's exactly the same thing. You go somewhere for two weeks, you don't know what's going to happen, then you send a postcard."

"Fishcotheque is a postcard. Which is why the photos of Waterloo - which is where it was recorded - on the sleeve are so appropriate. Fishcotheque and Sex And Travel and my favorite JB LPs. But I like 'em all, 'cos otherwise I wouldn't have made 'em."

A final note, to all possible doubters: tonight's renditions of Angels was so perfectly poignant as to provoke a second listen to the initially dismissed Distressed Gentlefolk (1986) LP, and upon that listen the whole damned thing sounded great. As great as any of the Jazz Butcher's seven albums of tuneful, heartfelt, and funny songs. So grab one - the man is down.
Visitor Feedback
No comments yet for this page [Add your own]