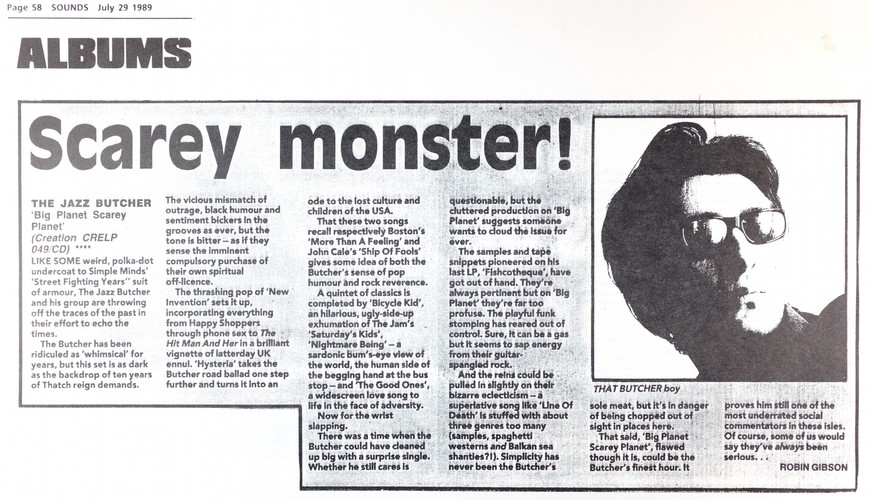 Like some weird, polka-dot undercoat to Simple Minds' Street Fighting Years suit of armour, The Jazz Butcher and his group are throwing off the traces of the past in their effort to echo the times.

The Butcher has been ridiculed as `whimsical' for years, but this set is dark as the backdrop of ten years of Thatch reign demands.

The vicious mismatch of outrage, black humour and sentiment bickers in the grooves as ever, but the tone is bitter - as if they sense the imminent compulsory purchase of their own spiritual off-license.

The thrashing pop of New Invention sets it up, incorporating everything from Happy Shoppers through phone sex to the "Hit Man And Her" in a brilliant vignette of latterday UK ennul. Hysteria takes the Butcher road ballad one step further and turns it into an ode to the lost culture and children of the USA.

That these two songs recall respectively Boston's More Than A Feeling and John Cale's Ship Of Fools gives some idea of both the Butcher's sense of pop humour and rock reverence.

A quintet of classics is completed by Bicycle Kid , an hilarious, ugly-side-up exhumation of The Jam's Saturday's Kids, Nightmare Being - a sardonic bum's-eye view of the world, the human side of the begging hand at the bus stop - and The Good Ones , a widescreen love song to life in the face of adversity.

Now for the wrist slapping.

There was a time when the Butcher could have cleaned up big with a surprise single. Whether he still cares is questionable, but the cluttered production on Big Planet, Scarey Planet suggests someone wants to cloud the issue for ever.

The samples and tape snippets pioneered on his last LP Fishcotheque, have got out of hand. They're always pertinent but on Big Planet, Scarey Planet they're far too profuse. Sure, it can be a gas but it seems to sap energy from their guitar-spangled rock.

And the reins could be pulled in slightly on their bizarre eclecticism - a superlative song like Line Of Death is stuffed with about three genres too many (samples, spaghetti westerns, and Balkan sea shanties?!). Simplicity has never been the Butcher's sole meat, but it's in danger of being chopped out of sight in places here.

That said, Big Planet, Scarey Planet , flawed though it is, could be the Butcher's finest hour. It proves him still one of the most underrated social commentators in these isles. Of course, some of us would say they've always been serious...