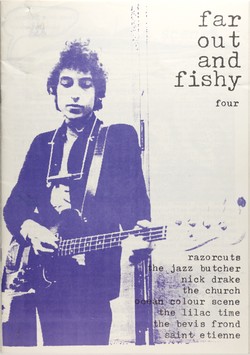 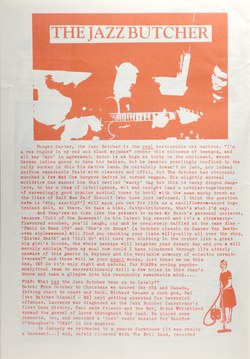 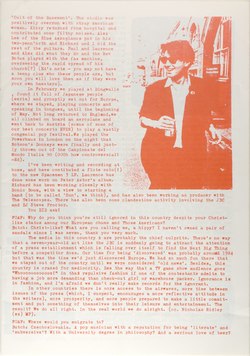 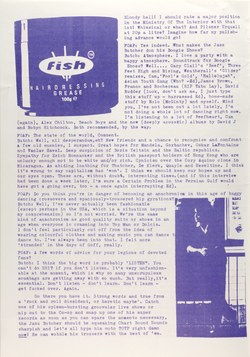 Forget Carter, the Jazz Butcher is the real unstoppable sex machine. "I'm a sex engine in my red and black pyjamas" croons this colossus of teenpop, and all say `aye' in agreement. Butch is as huge as Gorby on the continent, where German ladies queue to have his babies, but he remains puzzlingly confined to the culty bunker in this his native land. He certainly doesn't do jazz, nor indeed perform remarkable feats with cleavers and offal, but The Butcher has obviously munched a few Mad Cow burgers before he turned veggie. His slightly surreal worldview has earned him that reviled `wacky' tag but this is cacky dingos danglers, to tar a chap of intelligence, wit and insight (and a cobbler-togetherer of exceedingly good popular musical tunes to boot) with the same mucky brush as the likes of Half Man Half Biscuit (who have just reformed. I think the question here is `why, exactly?') will mark you out for life as a cauliflower-eared bog-brained dolt, so there. Go take a hike, fatty-britchers, that's what I'd say.

And they'res no time like the present to enter Mr Butcher's personal universe, because Cult Of The Basement is his latest big record and it's a strawberry-flavoured stonker, you'll, cry and be completely baffled at the same time - Panic In Room 109 and She's On Drugs (a butcher classic in Camper Van Beethoven styleeeeee) will find you chuckling your limbs willy-nilly all over the shop, Sister Death and Girl-Go will have you blubbing in the corner like a great big girl's blouse, the whole package will brighten your dreary day and you will merrily exclaim "upon my soul how could I have blundered through life utterly unaware of this genius in Raybans and his veritable armoury of eclectic inventiveness?" and those will be your exact words, just trust me on this one, OK? So it's only right and natural for FOAF8s roving psycho-analytically team to surreptitiously drill a few holes in this chap's bonce and take a glimpse into his reasonably remarkable mind...

FOAF: What has the Jazz Butcher been up to lately??
Butch: From October to Christmas we toured the USA and Canada, driving coast to coast and back. Richard Formby became a rock god, Pat Fish (the Butcher himself - Ed) kept getting arrested for terrorist offences, Laurence O'Keefe was diagnosed as the Jazz Butcher Conspiracy's first Case History, Paul Mulreany made friends and the Martin Stebbing (Rev. Botus Whiteblood Fleming) spread the gospel of Lurve throughout the land. We played some concerts, too, and recorded a `lost' radio session for Doerdre O'Donoghue's `SNAP' in Los Angeles.

In January we retreated to a remote farmhouse (It was really a basement...) and, safely closeted with The Evil Dead, recorded Cult Of The Basement. The studio was positively overrun with stray American women. Kizzy O'Callaghan returned from hospital and contributed some filthy noises. Alex Lee of The Blue Aeroplanes put in his two-penn'orth and Richard and I did the rest of the guitars. Paul and Laurence and Alex did what they do and the Rev Botus played with the fax machine, overseeing the rapid spread of his church (?) (Ed's note - you may not have a teeny clue who these people are, but soon you will love them as if they were your own hamsters).

In February we played at Dingwalls, found it full of Japanese people (eerie) and promptly set out for Europe, where we stayed, playing concerts and speaking in tongues, until the beginning of May. Not long returned to England, we all climbed on board an aeroplane and went off to Austria (scene of some of our best concerts EVER) to play a vastly congenial pop festival. We played the Powerhaus in London on the night that Robson's Donkeys were finally and justly thrown out of the Campionate del Mundo Itailia 90 (OOOh how controversial! - Ed).

I've been writing and recording at home, and have contributed a flute solo (!) to the new Spacemen 3 LP. Laurence has done some work on Peter Astor 's album. Richard has been working closely with Sonic Boom , with a view to starting a band (to be called `Sun', we think), and has also been working as producer with The Telescopes. There has also been some clandestine activity involving the JBC and DJ Steve Proctor.

Why do you think you're still ignored in this country despite your Christ-like status among our European chums and Those Americans?
Christ-like? What are you calling me, a hippy? I haven't owned a pair of sandals since I was seven, thank you very much.

The media in this country are probably the chief culprits. There's no way that a seven-year-old act like the JBC is suddenly going to attract the attention of a press establishment which is falling over itself to find the Next Big Thing before a competitor does. Our time for being `discovered' was probably around 1984 but that was the time we'd just discovered Europe. We had so much fun there that we stayed out of the country until we were considered `old news'. Besides, this country is crazed for mediocrity. See the way that a TV game show audience goes "Whooooooooooo!" in that repulsive fashion if one of the contestants admits to having a job more demanding than check-out girl or warehouse packer. Ignorance is in fashion, and I'm afraid we don't really make records for the ignorant.

In other countries there is more access to the airwaves, more time between issues of the press (which, I suspect, encourages a more reflective attitude in the writers), more prosperity, and more people prepared to make a little commitment and put something of themselves into their leisure and entertainment. The result? We do all right. In the real world we do alright. (cc. Nicholas Ridley (ex) MP).

Where would you emigrate to?
Czechoslovakia. A pop musician with a reputation for being `literate' and `subversive'? With a University degree in philosophy? And a serious love of beer? Bloody hell! I should rate a major position in the Ministry Of The Interior with that lot! Whimsical or what? And Pilsner Urquell at 20p a litre? Imagine how far my publishing advance would go!
Yes indeed. What makes the Jazz Butcher don his Boogie Shoes?
Atmosphere. I love a party with a happy atmosphere. Soundtrack for Boogie Shoes? Well..... Gary Clail's Beef, Three Feet High and Rising, Weatherall's Glider remixes, Can, Fool's Gold, Hallelujah, Asian Youth Gang (Who? -Ed), James Brown, Franco and Rochereau (RIP Tabu Lay), David Rudder (look, don't ask me, I just type this stuff up - harrassed Ed), home-made stuff by Rolo McGinty and myself. Mind you, I've not been out a lot lately, I'm not doing a whole lot of dancing right now. I'm listening to a lot of Beefheart, Can (again), Alex Chilton, Beach Boys and the new (deeply acoustic) albums by David J. and Robyn Hitchcock. Both recommended, by the way.
The state of the world, Comment.
Well, nil desperandum, eh? New friends and a chance to recognise and confront a few old enemies, I suspect. Great hopes for Mandela, Gorbachev, Oskar LaFontaine and Vaclav Havel. Deep suspicion of Boris Yeltsin and the Baltic republics. Sympathy for Erich Honnacker and the British passport holders of Hong Kong who are unlucky enough not to be white and/or rich. Cynicism over Cory Aquino clone in Nicaragua. An abiding loathing for Thatcher, De Klerk, Quayle and Heseltine. I think it's wrong to say capitalism has `won'. I think we should keep our hopes up and our eyes open. These are, without doubt, interesting times. (and if this interview had been done a week later, I'm sure a Certain Problem in the Persian Gulf would have got a going over, too - a once again interrupting Ed).
Do you think you're in danger of becoming an anachronism in this age of baggy dancing crossovers and spaciously-trousered hip gyrations?
Well, I've never actually been fashionable (except perhaps in the USA, which is a situation beyond my comprehension) so I'm not worried. We're the same kind of anachronism as good quality suits or shoes in an age when everybody is cramming into Top Man or Dolcis. I don't feel particularly cut off from the idea of wearing colourful clothes and making music you can dance to. I've always been into that. I felt more `stranded' in the days of Goff, really.
A few words of advice for your legions of devoted fans?
I think the big word is probably "LISTEN". You can't do SHIT is you don't listen. It's very unfashionable at the moment, which is why so many unscrupulous scumbags are getting away with so much. But really, it's essential. Don't listen - don't learn. Don't learn - get fucked over. Again.
So there you have it. Strong words and true from a `rock and roll dissident, or heretic maybe'. Catch one of his spleen-bursting groovular live shows or nip out to the Co-op and snap up one of his super records as soon as you can spare the moments necessary, the Jazz Butcher should be squeaking Chart Bound Sounds sharpish and let's all hype him onto TOTP right damn now!. He can wobble his trousers with the best of 'em.
Visitor Feedback
No comments yet for this page [Add your own]