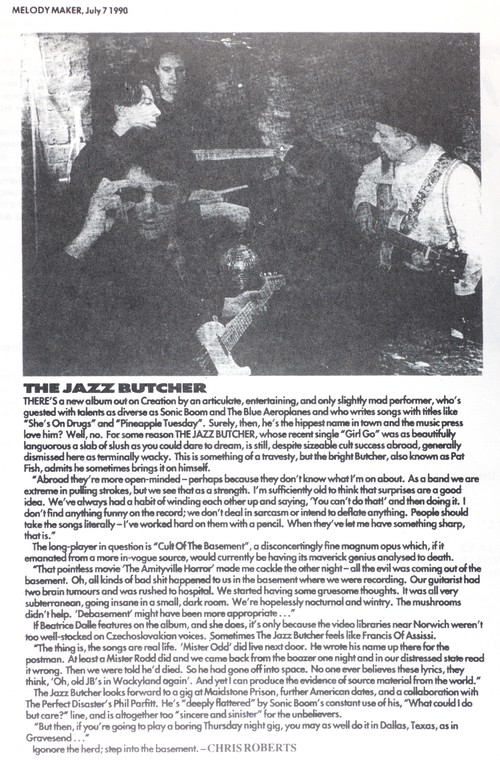 There's a new album out on Creation Records by an articulate, entertaining, and only slightly mad performer, who's guesting with talents as diverse as Sonic Boom and The Blue Aeroplanes and who writes songs with titles like She's On Drugs and Pineapple Tuesday . Surely, then, he's the hippest name in town and the music press loves him? Well, no. For some reason The Jazz Butcher, whose recent single Girl-Go was as beautifully languorous a slab of slush as you could dare to dream, is still, despite sizeable cult success abroad, generally dismissed here as terminally wacky. This is something of a travesty, but the bright Butcher, also known as Pat Fish , admits he sometimes brings it on himself.
"Abroad they're more open-minded - perhaps because they don't know what I'm on about. As a band we are extreme in pulling strokes, but we see that as a strength. I'm sufficiently old to think that surprises are a good idea. We've always had a habit of winding each other up and saying, `You can't do that!' and then doing it. I don't find anything funny on the record; we don't deal in sarcasm or intend to deflate anything. People should take the songs literally - I've worked hard on them with a pencil. When they've let me have something sharp, that is."

The long-player in question is Cult Of The Basement, a disconcertingly fine magnum opus which, if it emanated from a more in-vogue source, would currently be having its maverick genius analysed to death.

"That pointless movie `The Amityville Horror' made me cackle the other night - all the evil was coming out of the basement. Oh, all kinds of bad shit happened to us in the basement where we were recording. Our guitarist had two brain tumours and was rushed to hospital. We started having some gruesome thoughts. It was all very subterranean, going insane in a small, dark room. We're hopelessly nocturnal and wintry. The mushrooms didn't help. `Debasement' might have been more appropriate..."

If Beatrice Dalle features on the album, and she does, it's only because the video libraries near Norwich weren't too well-stocked on Czechoslovakian movies. Sometimes The Jazz Butcher feels like Francis Of Assissi.

"The thing is, the songs are real life. Mister Odd did live next door. He wrote his name up there for the postman. At least Mister Rodd did and we came back from the boozer one night and in our distressed state read it wrong. Then we were told he'd died. So he had gone off into space. No one ever believes these lyrics, they think 'Oh, old JB's in Wackyland again.' And yet I can produce the evidence of source material from the world."

The Jazz Butcher looks forward to a gig at Maidstone Prison, further American dates, and a collaboration with The Perfect Disaster's Phil Parfitt. He's "deeply flattered" by Sonic Boom 's constant use of his, "What could I do but care?" line, and is altogether too "sincere and sinister" for the unbelievers.

"But then, if you're going to play a boring Thursday night gig, you may as well do it in Dallas, Texas, as in Gravesend..."
Ignore the herd; step into the basement.
Visitor Feedback
No comments yet for this page [Add your own]