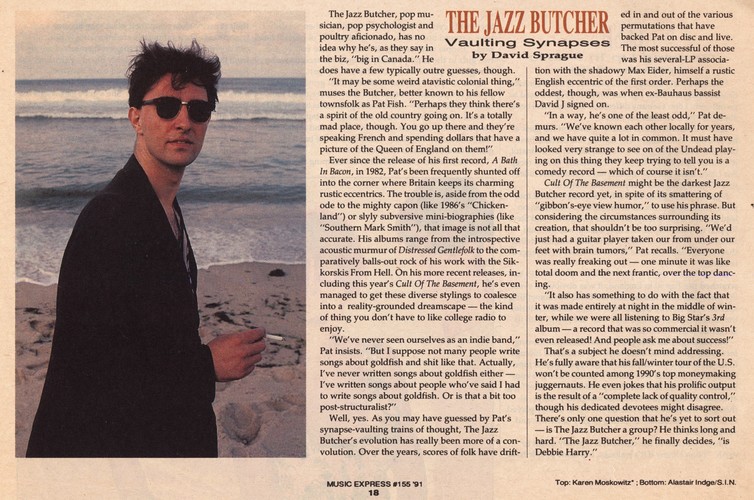 Credit: Alastair Indge
The Jazz Butcher, pop musician, pop psychologist and poultry aficionado, has no idea why he's, as they say in the biz, "big in Canada." He does have a few typically outre guesses, though.
"It may be some weird atavistic colonial thing," muses the Butcher, better know to his fellow townsfolk as Pat Fish . "Perhaps they think there's a spirit of the old country going on. It's a totally mad place, though. You go up there and they're speaking French and spending dollars that have a picture of the Queen of England on them!"

Ever since the release of his first record, Bath Of Bacon, in 1982, Pat's been frequently shunted off into the corner where Britain keeps its charming rustic eccentrics. The trouble is, aside from the odd ode to the might capon (like 1986's The Best Way or slyly subversive mini- biographies (like Southern Mark Smith that image is not at all that accurate. His albums range from the introspective acoustic murmurs of Distressed Gentlefolk to the comparatively balls-out rock of his work with the Sikkorskis From Hell. On more recent releases, including this year's Cult Of The Basement, he's even managed to get these diverse stylings to coalesce into a reality-grounded dreamscape - the kind of thing you don't have to like college radio to enjoy.

Well, yes. As you may have guessed by Pat's synapse-vaulting trains of thought, The Jazz Butcher's evolution has really been more of a convolution. Over the years, scores of folks have drifted in and out of the various permutations that have backed Pat on disc and live. The most successful of those was his several-LP association with the shadowy Max Eider , himself a rustic eccentric of the first order. Perhaps the oddest, though, was when ex-Bauhaus bassist David J. signed on.

"In a way, he's one of the least odd," Pat demurs. "We've known each other locally for years, and we have quite a lot in common. It must have looked very strange to see one of the Undead playing on this thing they keep trying to tell you is a comedy record - which of course it isn't."

Cult Of The Basement might be the darkest Jazz Butcher record yet, in spite of its smattering of "gibbon's-eye view humour," to use his phrase. But considering the circumstances surrounding its creation, that shouldn't be too surprising.

"We'd just had a guitar player taken from under our feet with brain tumours," Pat recalls. "Everyone was really freaking out - one minute it was like total doom and gloom and the next frantic, over the top dancing.

"It also has something to do with the fact that it was made entirely at night in the middle of winter, while we were listening to Big Star's 3rd album - a record that was so commercial it wasn't even released! And people ask me about success!"

That's a subject he doesn't mind addressing. He's fully aware that his fall/winter tour of the U.S. won't be counted among 1990's top moneymaking juggernauts. He even jokes that his prolific output is the result of a "complete lack of quality control," though his dedicated devotees might disagree. There's only one question that he's yet to sort out - is The Jazz Butcher a group? He thinks long and hard.

"The Jazz Butcher," he finally decides, "is Debbie Harry."
Visitor Feedback
No comments yet for this page [Add your own]