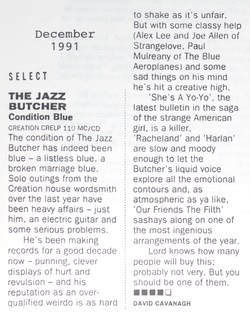 The condition of The Jazz Butcher has indeed been blue - a listless blue, a broken marriage blue. Solo outings from the Creation Records house wordsmith over the last year have been heavy affairs - just him, an electric guitar and some serious problems.

He's been making records for a good decade now - punning, clever displays of hurt and revulsion - and his reputation as an over-qualified weirdo is as hard to shake as it's unfair.

But with some classy help ( Alex Lee and Joe Allen of Strangelove, Paul Mulreany of The Blue Aeroplanes) and some sad things on his mind, he's hit a creative high.

She's A Yo-Yo , the latest bulletin in the saga of the strange American girl, is a killer. Racheland and Harlan are slow and moody enough to let the Butcher's liquid voice explore all the emotional contours and, as atmospheres as ya like, Our Friends The Filth sashays along on one of the most ingenious arrangements of the year.

Lord knows how many people will buy this; probably not very. But you should be one of them.