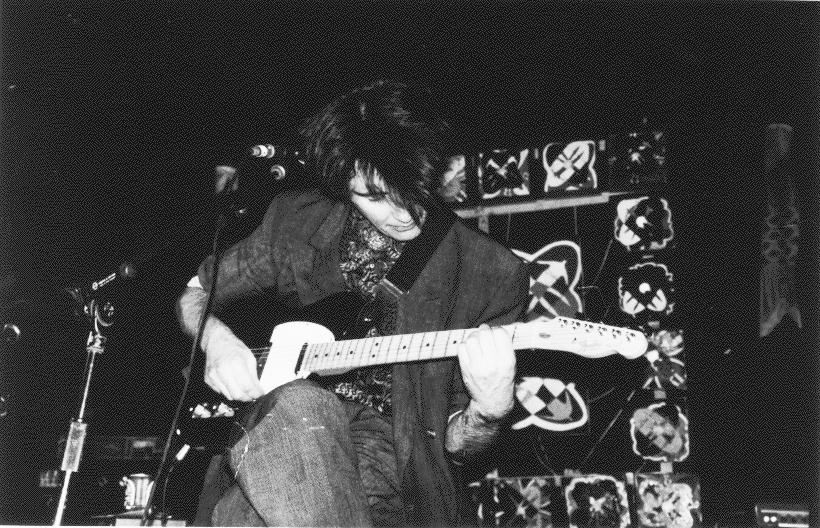 With the release of Condition Blue - an all-new 9 song collection of driving rockers, big beat ballads and moody atmospherics - The Jazz Butcher's latest step across the Atlantic should substantially expand the movement some have labeled "the Fishpower uprising."

Condition Blue has been praised for its "spiky wordplay and uncanny tune-touch." With such song titles as Monkeyface and Girls Say Yes , the record leaps through topics ranging from politics ("You want my votes, you'll have to pay me") on Our Friends The Filth ; to love ("All that honey ever wants is someone to watch Twin Peaks with") on Honey ; to warped double-entendre ("I've had a thing about Shirley Maclaine since I was so high") on Shirley Maclaine . Musically, Condition Blue jumps from speakers on the melodically grungy single She's A Yo-Yo , but spans sombre ballads, pure pop guitar licks, horns, coy backing vocals and a little bit of cha-cha-cha to boot. The ideas may be tongue in cheek and pure British wit, but there are some heartfelt emotions running just under Condition Blue winsome surface.

Select Magazine in England calls Condition Blue "a creative high" in a career with many high points: 1988's celebrated Fishcotheque; the follow-up Big Planet, Scarey Planet; the recent Cult Of The Basement; the Edward's Closet compilation. The Jazz Butcher's eclectic mix of off-hand observations and inventive melodies have made the group a staple of alternative radio playlists.

After a period of hungry obscurity (which yielded the critically acclaimed Bloody Nonsense and Distressed Gentlefolk albums), The Jazz Butcher began 1988 with a new record for a new label: Fishcotheque for Creation Records UK. Following a lengthly tour - highlights of which included Easter in Vienna, sold-out dates in North America and the invention of "Surrealist Rhyming Slang" (it doesn't rhyme!) - The Butcher returned to British soil to work on songs for what would later become Big Planet, Scarey Planet.

The Jazz Butcher members also engaged in various collaborations with other artists during this period - drummer Paul Mulreany appeared on The Times LP Beat Torture and the debut single for Joss Cope's group Something Pretty Beautiful; rehearsed and recorded with Peter Astor ; while The Butcher himself worked with Sonic Boom , Spacemen 3's Playing With Fire and in concert with The Blue Aeroplanes.

Half mad from various and sundry extracurricular activities, the Jazz Butcher reassembled in late 1989 and started on a string of British dates that saw Kizzy O'Callaghan replaced by longtime Butcher pen pal, guitarist Richard Formby . Another long and successful American tour followed before the Butcher and company returned home for more outside work (this time with Phil Parfitt of The Perfect Disaster) and preparation of the languorous single Girl-Go in June of 1990.

Cult Of The Basement, Pat Fish's weirdest brain child to date, followed soon after. The record again received rave reviews from some extremely disturbed journalists. Following yet another extensive American tour, The Butcher went into hiding at home, writing songs for the next studio outing. As usual, the other members concentrated on outside project - Laurence with Terry Biker's Levetation and Paul with The Blue Aeroplanes.

In the meantime, a compilation LP called Edward's Closet (don't ask, because we don't know) was released, which included their best tunes from 1987 to 1990 like Spooky and the jubilant She's On Drugs .

Which leaves us at the present - Condition Blue's release in the UK on Creation Records and subsequent licensing to Sky Records in the US. As for the future, The Jazz Butcher plans to: a) return to life as an itinerant insurance agent; b) become a used karma salesman; or c) embark on another extensive American tour to coincide with the US release of Condition Blue.

Given his past (however checkered it may be), we're betting on c.