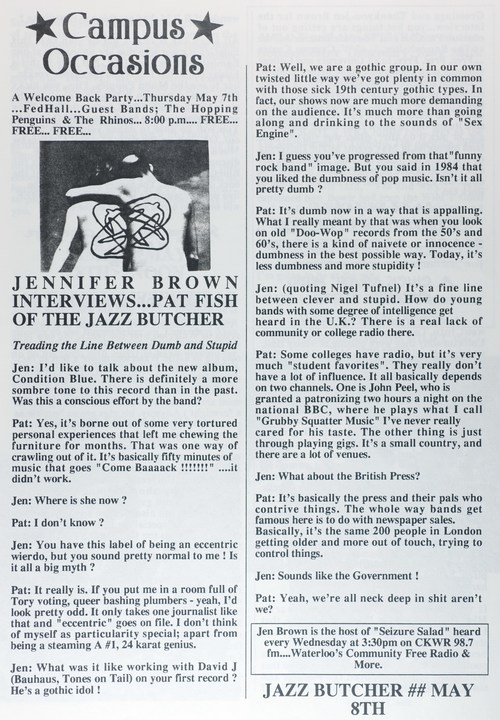 Jen: I'd like to talk about the new album, Condition Blue. There is definitely a more sombre tone to this record than in the past. Was this a conscious effort by the band?
Pat: Yes, it's borne out of some very tortured personal experiences that left me chewing the furniture for months. That was on way of crawling out of it. It's basically fifty minutes of music that goes "Come Baaaaack!!!!!!" ... it didn't work
Where is she now?
I don't know.
You have this label of being an eccentric wierdo, but you sound pretty normal to me! Is it all a big myth?
It really is. If you put me in a room full of Tory voting, queer bashing plumbers - yeah, I'd look pretty odd. It only takes one journalist like that and "eccentric" goes on file. I don't think of myself as particularly special; apart from being a steaming A #1, 24 karat genius.
What was it like working with David J. (Bauhaus, Tones on Tail) on your first record? He's a gothic idol!
Well, we are a gothic group. In our own twisted little way we've got plenty in common with those sick 19th century gothic types. In fact, our shows now are much more demanding on the audience. It's much more than going along and drinking to the sounds of Sex Engine .
I guess you've progressed from that "funny rock band" image. But you said in 1984 that you liked the dumbness of pop music. Isn't it all pretty dumb?
It's dumb now in a way that is appalling. What I really meant by that was when you look on old "Doo-Wop" records from the 50's and 60's, there is a kind of naivete or innocence - dumbness in the best possibly way. Today, it's less dumbness and more stupidity!
(quoting Nigel Tufnel) It's a fine line between clever and stupid. How do young bands with some degree of intelligence get heard in the U.K.? There is a real lack of community or college radio there.
Some colleges have radio, but it's very much "student favourites." They really don't have a lot of influence. It all basically depends on two channels. One is John Peel, who is granted a patronising two hours a night on the national BBC, where he plays what I call "Grubby Squatter Music." I've never really cared for his taste. The other thing is just through playing gigs. It's a small country, and there are a lot of venues.
What about the British Press
It's basically the press and their pals who contrive things. The whole way bands get famous here is to do with newspaper sale. Basically, it's the same 200 people in London getting older and more out of touch, trying to control things.
Sounds like the Government!
Yeah, we're all neck deep in shit, aren't we?
Visitor Feedback
Visitors' comments for this page [Add your own]