The Ottawa Citizen British Popster Fights The Good Fight To Put Some Literacy Back Into Lyrics (Ottawa, Ontario, Canada)
May 07, 1992
Credit: Roch Parisien 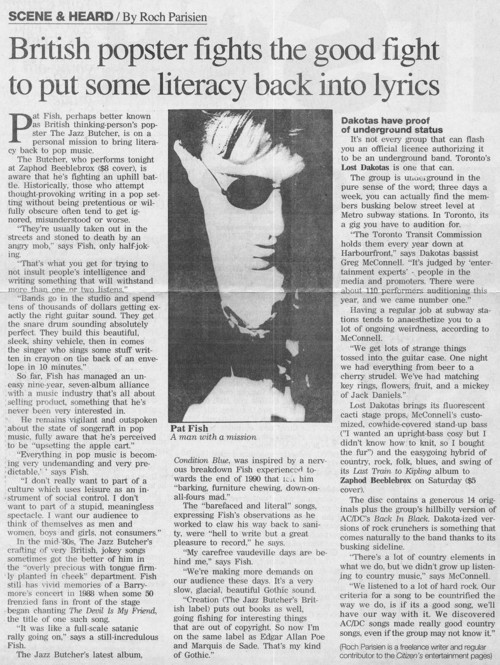 Pat Fish , perhaps better known as British thinking-person's popster The Jazz Butcher, is on a personal mission to bring literacy back to pop music.

The Butcher, who performs tonight at Zaphod Beeblebrox ($8 cover), is aware that he's fighting an uphill battle. Historically, those who attempt thought-provoking writing in a pop setting without being pretentious or willfully obscure often tend to get ignored, misunderstood or worse.

"They're usually taken out in the streets and stoned to death by an angry mob," says Fish, only half-joking.

"That's what you get for trying to not insult people's intelligence and writing something that will withstand more than one or two listens."

"Bands go in a studio and spend tens of thousands of dollars getting exactly the right guitar sound. They get the snare drum sounding absolutely perfect. They build this beautiful, sleek, shiny vehicle, then in comes the singer who sings some stuff written in crayon on the back of an envelope in 10 minutes."

So far, Fish has managed an uneasy nine-year, seven-album alliance with a music industry that's all about selling product, something that he's never been very interested in.

He remains vigilant and outspoken about the state of songcraft in pop music, fully aware that he's perceived to be "upsetting the apple cart."

"Everything in pop music is becoming very undemanding and very predictable," says Fish.

"I don't really want a part of a culture which uses leisure as an instrument of social control. I don't want a part of a stupid, meaningless spectacle. I want our audience to think of themselves as men and women, boys and girls, not consumers."

In the mid-'80s, The Jazz Butcher's crafting of very British, jokey songs sometimes got the better of him in the "overly precious with tongue firmly planted in cheek" department. Fish still has vivid memories of a Barrymore's concert in 1988 when some 50 frenzied fans in front of the strange began chanting The Devil Is My Friend , the title of one such song.

"It was like a full-scale satanic rally going on," says a still-incredulous Fish.

The Jazz Butcher's latest album, Condition Blue, was inspired by a nervous breakdown Fish experienced towards the end of 1990 that left him "barking, furniture chewing, down-on-all-fours mad."

The "barefaced and literal" songs, expressing Fish's observations as he worked to claw his way back to sanity, were "hell to write but a great pleasure to record," he says.

"My carefree vaudeville days are behind me," says Fish.

"Creation Records (the Jazz Butcher's British label) put out books as well, going fishing for interesting things that are out of copyright. So now I'm on the same label as Edgar Allan Poe and Marquis de Sade. That's my kind of Gothic."