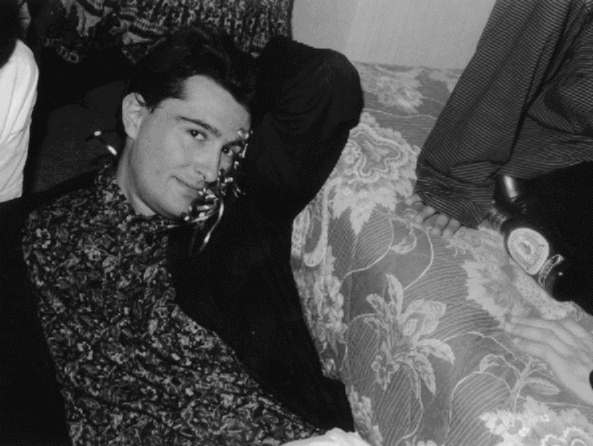 Distressed Gentlefolk is the title of the Jazz Butcher's 1986 album, but that name can also lend itself to the men behind the band quite literally. A select few around Bloomington seem to recognize the name Jazz Butcher, and it is a shame they are not as exposed as they should be. Or perhaps their lack of over-popularity is what saves them the vanity or "star" egos. They truly are the kindest, warmest British gentlemen one could ever meet.

A few weeks ago, on April 28th to be exact, I left Bloomington in a frenzy. It was a desperate last minute decision to struggle away from becoming a "Slacker" and remaining in Bloomington all my life. In fleeing, I drove off to Philadelphia (where I hope to possibly establish new roots some day) and happened to notice that the Jazz Butcher Conspiracy (or JBC as they are also known), were playing at a local small Philly venue.

A good friend of mine named David Whittemore tours with the JBC doing some DAT recordings, so I went to the venue early to hunt him down. When I asked the doorman if David was there, he shrugged and said to just ask the band. And there they were - tuning their instruments and having a few beers as if they were a local band in their own town. So I met the band by just walking right up, introducing myself and asking for David. "David...," one of them said, "...ah yes, one of the quiet ones. No I haven't seen him yet, but my name is Pete," and he reached out his hand to shake mine. Pete proceeded to introduce me to the rest of the band, one by one - each giving me a smile and a handshake. I was in awe of them for the music all these years, but I was even more in awe of their immediate friendliness and consideration in making me feel welcome. As we awaited the show to start - Pete, David and I played pinball to pass the time. The JBC and their whole crew of sound men, managers, and groupies are the warmest most incredibly entertaining British gentlefolk I have ever met.

The band's basis is Pat Fish , or "the Jazz Butcher" himself, who began recording under that name in 1983 with the album Bath Of Bacon. Along the way in his musical career, Mr. Fish has played with such people as David J. and Kevin Haskins (both from the groups Bauhaus and Love And Rockets, and incidentally brothers). The brothers were part of the JBC in 1984-1985, and later Pat Fish appeared on David J. 's solo album in 1990. Max Eider was the incredible guitarist with Mr. Fish up until Distressed Gentlefolk was released. Mr. Fish also played with the guitarist Richard Formby on the 1990 tour. Formby now works with Spacemen 3, another band Pat Fish works with now and then, as well as the groups The Perfect Disaster and The Blue Aeroplanes.

The current JBC lineup which has been touring these United States since April 24th, consists of Peter Crouch on guitar, Nick Burson on drums, a man who Goes by the name Dooj Wilkinson on bass, and Pat Fish on guitar and lead vocals. Peter Crouch recorded on the JBC's latest release Condition Blue, and has known Mr. Fish for about nine months. Pete is the quiet one, who seems to remain rather still and pensive in concert, taking every chord very seriously it seems. When I asked him how he like playing with Pat Fish and the whole JBC, he replied It's fucking great, I just wish I knew of work after June 18th when the tour ends." And he added rather lightly, "...suppose you can find me a job in the States, ya know - anything even under the table or something?" But I tried to explain our lousy economy as it exists and that I would try my best, but could not promise anything.

Nick Burson had a great story to tell of how he hooked up with Mr. Fish. "It's quite lucky actually, I moved to London in a flat below this chap who knew Pat from his home town in North Hampton. Pat was looking for a drummer at the time, and suddenly within a few days I got this phone call... It was amazing really." I asked Nick if he was enjoying the tour and he replied, "It's incredible, I've never done this before, ya know. It's like you meet so many great people, play and drink beer. It's amazing." Nick has played with Pat for about two months now, but says rather distressed "I don't know what happens next after the tour really. I mean, it might just be back to the dole for me and Pete." The droll meaning Britian's equivalent to unemployment checks.

Dooj Wilkinson is the elusive one. Not only did I get few photos of him, but few words as well. He comes across as a bit like Johnny Rotten of the Sex Pistols, with his bleached white hair standing straight up, and his (I hate to use this cliche label) punk attire; but it should be made clear he is nothing like Mr. Rotten if you talk to him. He just stands out a bit against Pat Fish's hound's tooth suit - well trousers and a jacket, with some sort of paisley shirt. Dooj Wilkinson won't reveal his true name, and has played with Pat for about six months now.

I met up again with the JBC in Chicago, at their Lounge Ax venue on May 16th. They seemed to fancy Chicago quite well, above most other cities they have played. In Chicago, I was able to meet with other JBC "conspirators" - their sound man Iain O'Higgins, and former sound-man Martin Stebbing (Rev. Botus Whiteblood Fleming) produced the JBC release Cult Of The Basement.

Upon showing the band my photos from the Philly show, Iain exclaimed he had some photos to show me. "Oh no..." everyone else moaned, "don't get him started on this again!" Iain fumbled around in his briefcase to produce three packages of photos of his new baby daughter. "Look at this one!" he cheered, handing me nude bathing shots of the infant, and passing photos of soiled diapers and feedings, et al. I just laughed to myself at what real people these guys were. I mean, here is this thirtysomething British man, working with a well established band - giggling over pictures of his daughter and sharing them with people he just met. Of course then I had to compete and show off my new nephew, whom Iain praised in return. These guys are incredible, really kind, warm, fun men whose job is simply making music.

Pat Fish says "It's just a job really, ya know." I noticed some of the Chicago crowd was taken aback by Mr. Fish's musical attitude. He began the set explaining "All right I just want to let you know now, we don't respond very well when you shout at us when we are facing you this way," (that is on stage). He continued, "It's not like in one ear out the other - shout for more, ya know? I hope you can feel the music here, (pointing to his mind) and here (pointing to his heart) and perhaps if you're lucky feeling it a little bit lower if you know what I mean," (alluding I would assume to the area between one's legs). Mr. Fish's attitude towards his music was quite amazing to me. He really seems attached to every word and chord as if each one held a very deep memory or wish he wanted to share.

Later in the show, a drunk man in the crowd yelled "play Buffalo Shame man!" and Mr. Fish replied off to the side something to the effect of "Sorry...don't believe I can put that one together anymore. It was so long ago and with a different band." The drunk man persisted, "yeah well if you cannot even remember your own song you might as well just get out of here!" Wherein Mr. Fish replied, "You keep talking like that and you will be out of here and rather quickly yourself." Mr. Fish then came to the microphone to say, "You know it's amazing how some people believe they are the only ones who has bought a ticket or something." Most of the crowd seemed to nod knowing what he meant, but a few shouted out "arrogant asshole!" or other rude and unnecessary comments. But I seemed to understand what Pat was saying. The music is as much (if not more) for them as it is for the crowd. "Look I don't tell you how to do your job, ya know?" Pat says rather pleadingly into the microphone. "The only ones who can argue with me on what to play is the band here," and he smiles to the others on stage.

It seems to take a certain kind of person to appreciate the Jazz Butcher's music, as well as their over-all attitudes. They do not want to sign autographs, they want to talk to people. As Nick put it, "yeah it's great, there really are no egos or pretension. When you come right down to it, its a job. A job we happen to enjoy doing."

Basically, the Jazz Butcher is composed of a bunch of distressed gentlefolk. Distressed by the economy, and feeling they haven't a really steady job - just like everybody else. And also distressed for being misunderstood, or misinterpreted as an image they are not. Mr. Fish seems to welcome people to just walk right up to him as he lounges around the venue before each show. Buy him a drink and just talk to him! I would encourage everyone to do so. Look for their shows, go early and introduce yourself, you won't be disappointed. They all are the funniest, warmest and most realistic people you will ever want to meet. I would just like to thank them for all the stories, the hugs, for watching the sunrise, and for some of the best times in my life. It's a great memory.