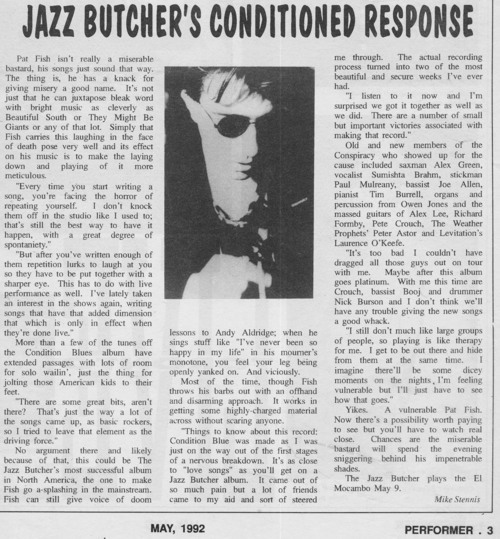 Pat Fish isn't really a miserable bastard, his songs just sound that way. The thing is, he has a knack for giving misery a good name. It's not just that he can juxtapose bleak word with bright music as cleverly as Beautiful South or They Might Be giants or any of that lot. Simply that Fish carries this laughing face of death pose very well and its effect on his music is to make the laying down and playing of it more meticulous.
"Every time you start writing a song, you're facing the horror of repeating yourself. I don't knock them off in the studio like I used to; that's still the best way to have it happen, with a great degree of sponteniety."

"But after you've written enough of them repetition lurks to laugh at you so they have to be put together with a sharper eye. This has to do with live performance as well. I've lately taken an interest in the shows again, writing songs that have an added dimension that which is only in effect when they're done live."

More than a few of the tunes off the Condition Blue album have extended passages with lots of room for solo wailin', just the thing for jolting those American kids to their feet.
"There are some great bits, aren't there? That's just the way a lot of the songs came up, as basic rockers, so I tried to leave that element as the driving force."
No argument there and likely because of that, this could be The Jazz Butcher's most successful album in North America, the one to make Fish go a-slashing in the mainstream. Fish can still give voice of doom lessons to Andy Aldridge; when he sings stuff like "I've never been so happy in my life" Girls Say Yes [sic] in his mourner's monotone, you feel like your leg being openly yanked on. And viciously.

Most of the time, though Fish throws barbs out with an offhand and disarming approach. It works in getting some highly-charged material across without scaring anyone.

"Things to know about this record: Condition Blue was made as I was just on the way out of the first stages of a nervous breakdown. It's as close to "love songs" as you'll get on a Jazz Butcher album. It came out of so much pain but a lot of friends came to my aid and sort of steered me through. The actual recording process turned into two of the most beautiful and secure weeks I've ever had."

"I listen to it now and I'm surprised we got it together as well as we did. There are a number of small but important victories associated with making that record."

Old and new members of the Conspiracy who showed up for the cause included saxman Alex Green , vocalist Sumishta Brahm , stickman Paul Mulreany , bassist Joe Allen, pianist Tim Burrell, organs and percussion from Owen Jones and the massed guitars of Alex Lee , Richard Formby , Peter Crouch , The Weather Prophets' Peter Astor and Levitation's Laurence O'Keefe .
"It's too bad I couldn't have dragged all those guys out on tour with me. Maybe after this album goes platinum. With me this time are Crouch, bassist Dooj Wilkinson and drummer Nick Burson and I don't think we'll have trouble giving the new songs a good whack.

"I still don't much like large groups of people, so playing is like therapy for me. I get to be out there and hide from them at the same time. I imagine there'll be some dicey moments on the nights I'm feeling vulnerable but I'll just have to see how that goes."

Yikes. A vulnerable Pat Fish. Now there's a possibility worth paying to see but you'll have to watch real close. Chances are the miserable bastard will spend the evening sniggering behind his impenetrable shades.
The Jazz Butcher plays the El Mocambo May 9.
Visitor Feedback
No comments yet for this page [Add your own]