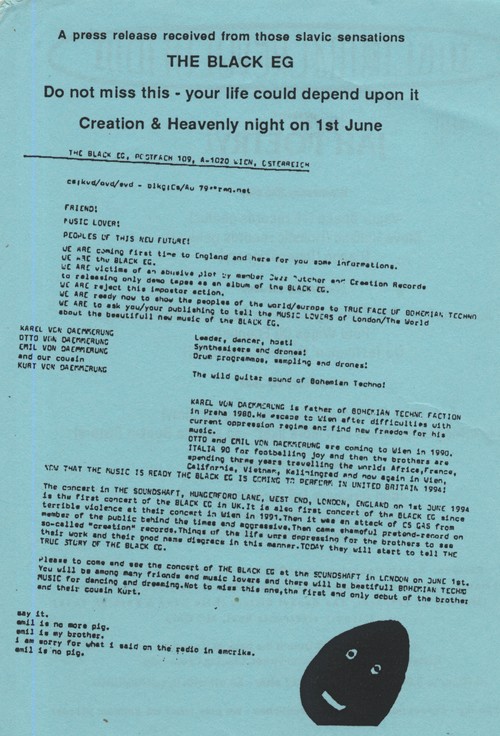 
WE ARE coming first time to England and here for you some informations.
WE ARE the BLACK EG.
WE ARE victims of an abusive plot by member Jazz Butcher and Creation Records
to releasing only demo tapes as an album of the BLACK EG.
WE ARE reject this impostor action.
WE ARE ready now to show the peoples of the world/europe to TRUE FACE OF BOHEMIAN TECHNO
WE ARE to ask you/your publishing to tell the MUSIC LOVERS of London/The World
about the beautiful new music of the BLACK EG.


KAREL VON DÄMMERUNG is the father of BOHEMIAN TECHNO FACTION
in Praha 1980. He escape to Wien after difficulties with
the current oppression regime and find new freedom for his
music.
OTTO and EMIL VON DÄMMERUNG are coming to Wien in 1990.
ITALIA 90 for footballing joy and then the brothers are
spending three years travelling the world: Africa, France,
California, Vietnam, Kallingrad and now again in Wien.
NOW THAT THE MUSIC IS READY THE BLACK EG IS COMING TO PERFORM IN UNITED BRITAIN 1994!


The concert in the SOUNDSHAFT, HUNGERFORD LANE, WEST END, LONDON, ENGLAND on 1st June 1994
is the first concert of the BLACK EG in UK. It is also first concert of the BLACK EG since
terrible violence at their concert in Wien in 1991. Then it was an attack of CS GAS from
member of the public behind the times and aggressive. Then came shameful pretend-record on so-called
"creation" records. Things of the life were depressing for the brothers to see
their work and their good name disgrace in this manner. TODAY they will start to tell THE
TRUE STORY OF THE BLACK EG.


Please come and see the concert of the BLACK EG at the SOUNDSHAFT in LONDON on June 1st.
You will be among many friends and music lovers and there will be beautifull BOHEMIAN TECHNO
MUSIC for dancing and dreaming. Not to miss this one, the first and only debut of the brothers
and their cousin Kurt.


say it.
emil is no more pig. emil is my brother.
i am sorry for what i said on the radio in amerika.
emil is no pig.