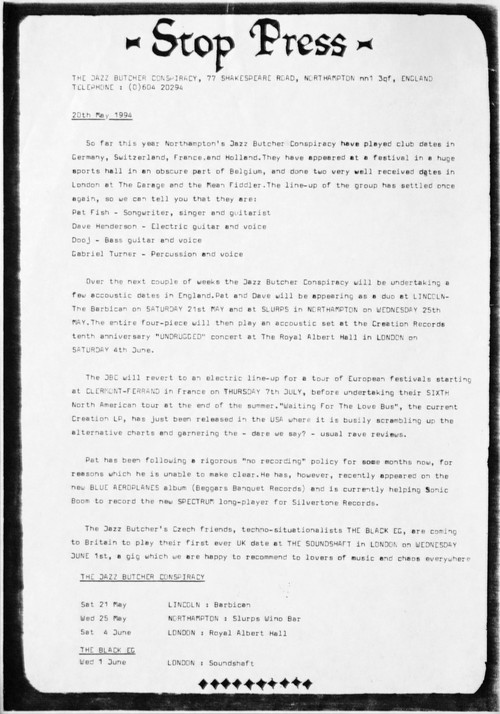 So far this year Northampton's Jazz Butcher Conspiracy have played club dates in Germany, Switzerland, France, and Holland. They have appeared at a festival in a huge sports hall in an obscure part of Belgium, and done two very well received dates in London at The Garage and the Mean Fiddler. The line-up of the group has settled once again, so we can tell you that they are:

Over the next couple of weeks the Jazz Butcher Conspiracy will be undertaking a few acoustic dates in England. Pat and Dave will be appearing as a duo at Lincoln - The Barbican on Saturday 21st May and at Slurp's Wino Bar in Northampton on Wednesday 25th May. The entire four-piece will then play an acoustic set at the Creation Records tenth anniversary "Undrugged" concert at The Royal Albert Hall in London on Saturday 4th June.

The JBC will revert to an electric line-up for a tour of European festivals starting at Clermont-Ferrand in France on Thursday 7th July, before undertaking their SIXTH North American tour at the end of the summer. Waiting For The Love Bus, the current Creation Records LP, has just been released in the USA where it is busily scrambling up the alternative charts and garnering the - dare we say? - usual rave reviews.

Pat Fish has been following a rigorous "no recording" policy for some months now, for reasons which he is unable to make clear. He has, however, recently appeared on the new The Blue Aeroplanes album (Beggars Banquet Records) and is currently helping Sonic Boom to record the new Spectrum long-player for Silvertone Records.

The Jazz Butcher's Czech friends, techno-situationalists The Black Eg, are coming to Britain to play their first ever UK date at The Soundshaft in London on Wednesday June 1st, a gig which we are happy to recommend to lovers of music and chaos everywhere.